This brief account describes the commemorative event on 20 July 2016 in Burton which marked the centenary of the death of Major Congreve on the Somme. Additional details are given which outline the history, after 1916, of Billy Congreve’s wife and daughter.

A description of Billy Congreve’s life, his VC Citation and his connection to Burton, are given in the accompanying article William [‘Billy’] La Touche Congreve VC, DSO, MC – a Burton Hero on this website.

Billy Congreve was killed on Thursday 20 July 1916 and on the afternoon of Wednesday 20 July 2016, to observe the centenary of his death, a short ceremony took place outside the Gladstone Village Hall during which a commemorative stone was unveiled. Representing the Congreve family was Ben Stephenson, a grandson of Billy Congreve.

The ceremony was opened by Lieutenant Colonel Andrew Trelawny who outlined the history of the Rifle Brigade, the regiment in which Billy Congreve served.

The Rifle Brigade (Prince Consort’s Own) was an infantry rifle regiment formed in January 1800 (as the “Experimental Corps of Riflemen”) which had an illustrious service in both World Wars before its amalgamation with the 1st Green Jackets and the King’s Royal Rifle Corps, to form The Royal Green Jackets, on 1 January 1966.

Councillor Razia Daniels, Deputy Lord Mayor of Chester, gave a summary of Billy Congreve’s life before Billy’s VC Citation was read by Lieutenant Colonel Nick Jenkins OBE, onetime an officer with The Royal Green Jackets and from 1989 to 1992 the Commanding Officer of the 5th (Shropshire and Herefordshire) Battalion The Light Infantry.

The commemorative stone was unveiled by Councillor Razia Daniels and Bugle Major Mark Douglas played the Last Post, Reveille and No More Parades. Light refreshments, including a cake and cupcakes decorated with an image of the Victoria Cross, were served to the (approximately 50) persons attending the ceremony. 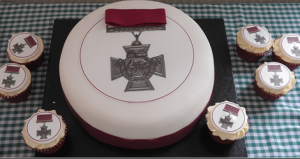 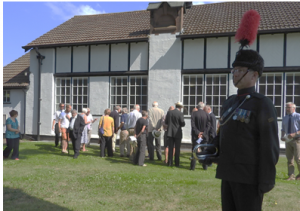 Bugle Major Mark Douglas and some of visitors and local residents attending the unveiling. 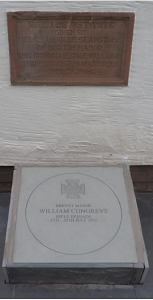 The Congreve memorial stone below the Gladstone plaque. 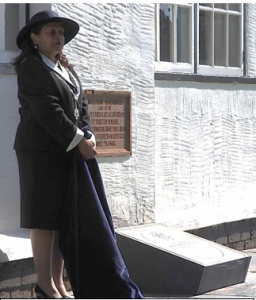 Councillor Razia Daniels, Deputy Lord Mayor of Chester, unveiling the commemorative stone to Billy Congreve. This has been set directly below the foundation stone which was laid on 28 July 1906 as a memorial to Henry Neville Gladstone who donated the Hall – then the Village Institute – to Burton village.

Following the commemoration at the Gladstone Village Hall some of the visitors were accompanied across the road to the parish church of St Nicholas to look at the Congreve memorial plaques, windows and family graves before a brief visit to Burton Manor. 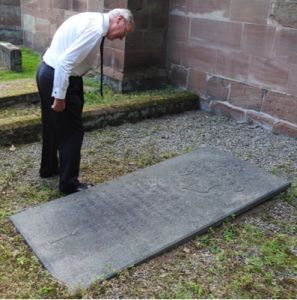 Ben Stephenson, a grandson of Billy Congreve, examining the memorial stone on the Congreve vault in Burton churchyard. 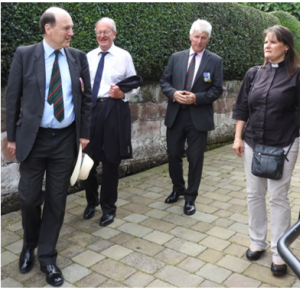 Ben Stephenson, a grandson of Billy Congreve, at the rear of Burton Manor.

Just seven weeks after his marriage on 1 June 1916 to Pamela Cynthia Maude, at St Martin’s-in-the-Fields, Billy Congreve was killed by a sniper’s bullet whilst leading his troops on the front line on the Somme battlefield. Unknown to Billy, Pamela was then pregnant with their child and Mary Gloria Congreve was born 21 March 1917.

On 1 November 1916 Pamela received Billy’s decorations from King George V at Buckingham Palace and, on 22 December 1919, she married Major the Honourable William Fraser, DSO, MC, at the parish church of St George’s, Hanover Square, in the City of Westminster in central London (where the baroque composer George Frideric Handel had been a regular worshipper in the 18th century). William Fraser (born 5 July 1890) was a career militarian and the fourth son of Alexander William Frederick Fraser, 19th Lord Saltoun of Abernethy; a great friend of Billy Congreve he had been Billy’s Best Man at his marriage to Pamela in 1916.

In December 1920 Pamela gave birth to the first of two sons, David; he, as General Sir David William Fraser GCB, OBE, of the Grenadier Guards had a distinguished military career culminating in his appointments as the British Military Representative to NATO in 1975 and the Commandant of the Royal College of Defence Studies in 1977. David William Fraser died on 15 July 2012.A second son, Alastair Grattan Maude Fraser, was born on 3 March 1926 but died on 7 May 1932.

November 1964, and his funeral took place at Aldeburgh on 16 November. Although Pamela Cynthia Fraser, Billy Congreve’s widow, was not recorded on William Fraser’s Probate record, it is understood that she died on 20 October 1975 although no public domain records of her death have been found. 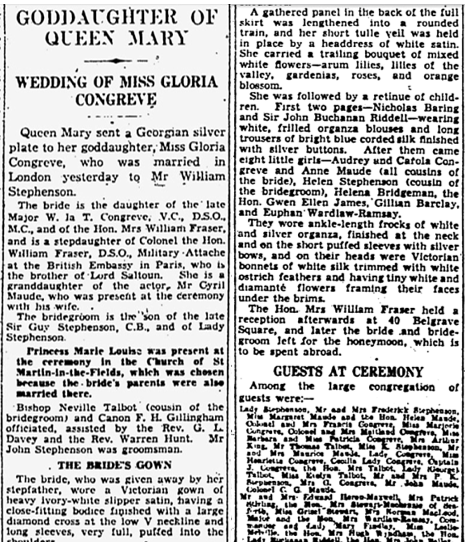 Following a short engagement – announced in The Times on 17 January – Mary Gloria Congreve, the only child of Billy and Pamela Cynthia Congreve, married Augustus William Stephenson on Tuesday 18 April 1939. The wedding, which was attended by Princess Marie Louise of Schleswig-Holstein, a granddaughter of Queen Victoria, took place at the church of St Martin’s-in-the-Fields on the corner of Trafalgar Square, the same church where her parents had married some 23 years previously. Augustus was the

eldest son of the late Sir Guy Stephenson, C.B. and of Lady Stephenson, née Gwendolen Talbot, and Augustus and Mary Gloria appear to have had three or four sons one of whom, Benjamin Stephenson, attended the centenary ceremony in Burton in July 2016.

Mary Gloria Stephenson, Billy Congreve’s daughter, died at Englefield Green in Surrey on 10 June 1992 and her husband, Augustus, died in Kent on 17 November 2000.
In June 1983 Mary Gloria Stephenson put her father’s military decorations, until then on display at the Royal Green Jackets (Rifles) Museum in Winchester, up for sale. Following an appeal on behalf of the museum the medals were purchased for £26 000 and are now on permanent display.