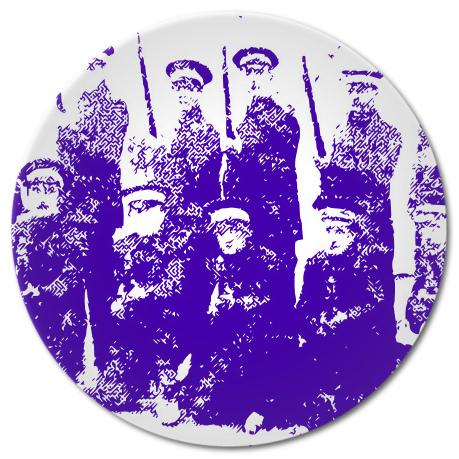 The Great War – Week by Week

At the end of June 1914 Neston people were aware that some  Austrian arch-duke had been assassinated somewhere in the Balkans, but like most of the rest of the world, they would have had no idea of what that event would lead to within five short weeks.

Early June had seen the centenary of a certain Female Friendly Society, though the May Day celebrations a month earlier were just as popular.  The May Day procession had included a cycle carnival and donkey parade, and with the aid of the enthusiastic Boys Brigade, a good sum had been raised for the Victoria Nursing Fund that supported district nursing.

The Loyal Order of Ancient Shepherds, a male equivalent to the Ladies Club, was still very popular, and there was some disappointment when the magistrates refused a licence for the  Red Lion to serve from a shed in a nearby field to relieve the pressure in the pub on the day of their annual walk.

Some of the local young men were (as ever) causing problems for the police. A couple of them (we will resist mentioning the still familiar names!) were charged with being drunk and disorderly after walking up Parkgate Road from the station singing comic songs and using bad language, and telling Sergeant Bee to mind his own business. This had become a regular Sunday night problem. Several men were also fined for playing football in Hinderton Road on a Sunday.

An enquiry concerning a Town Planning Scheme was under way at the end of June – “A fine thing for the district” claimed one councillor, as it  was supposed to prevent any haphazard building to the detriment of others. There were plans to carry out some demolitions, and homes for the “working classes” were sorely needed. The Neston Cottage Company, a forerunner of the Neston and Parkgate Housing Society had already started building cottages on Cottage Close. 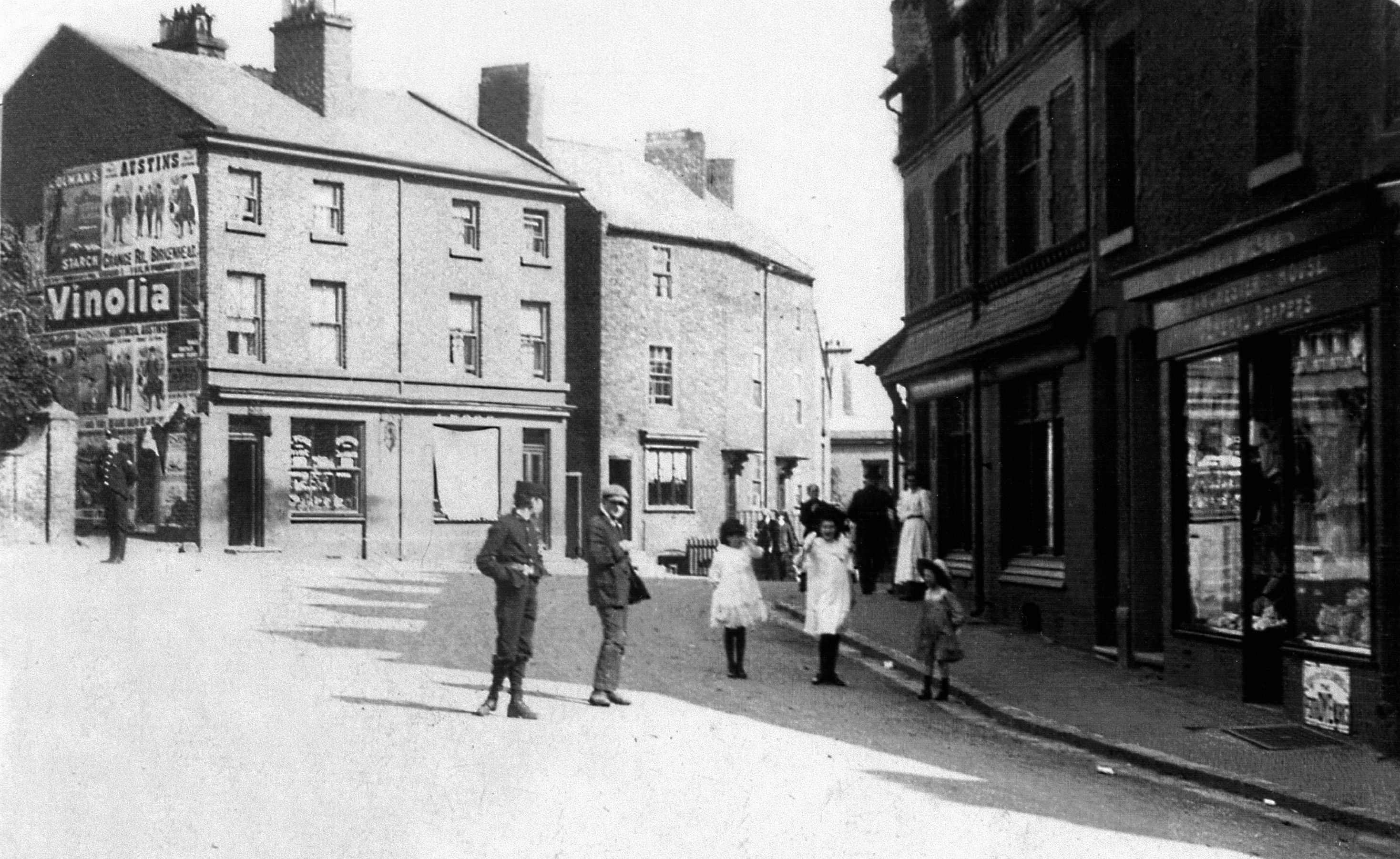 Hundreds of locals had flocked to Parks Field  in early July to see the Daily Mail sponsored mono-plane, flown by Frenchman Henri Salmet- and he made dozens of trips taking brave souls  for a flight to Eastham and back. Army Territorials were camping on the field at the same time – a regular event on Parks Field for many years.

Even before the tidings of war were noticed, first-aid ambulance classes were proving popular. There had been a  men’s ambulance class earlier in the year taught by local GP Dr Grant, and  Mrs Pemberton of  The Mount (now Hinderton Mount Residential Home)  had put a lot of energy into forming the detachment of the British Red Cross Society that flourished in Neston that summer. The Pembertons, like many others, were to feature regularly in the local news over the next few years because of their commitment to the war effort in various ways.

The town had a good selection of shops at that time; a popular fancy-goods and  drapery store was run by Clarissa Tranter, on Parkgate Road (in the building recently given a smart new frontage and made residential). Mrs Tranter had been somewhat surprised one summer’s day  by fifteen sheep crashing through her glass door, leaping over the counter and invading the shop, then showing some reluctance to leave! 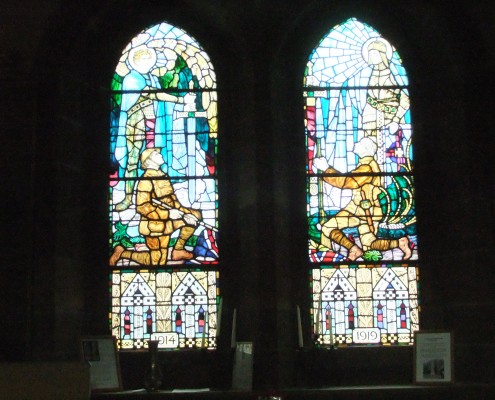 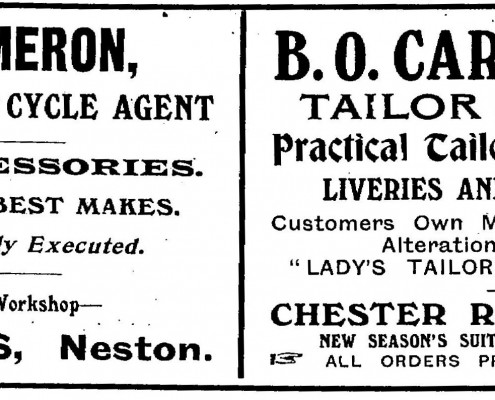 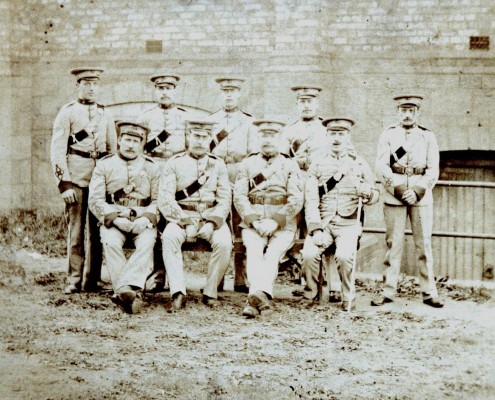 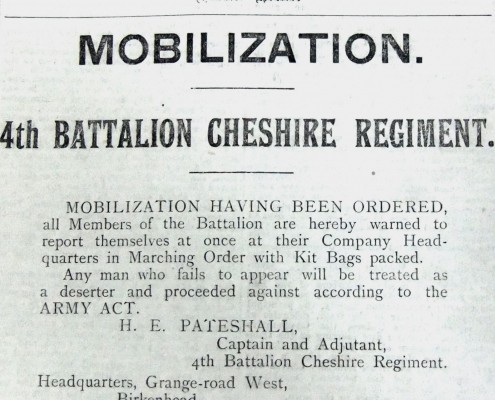 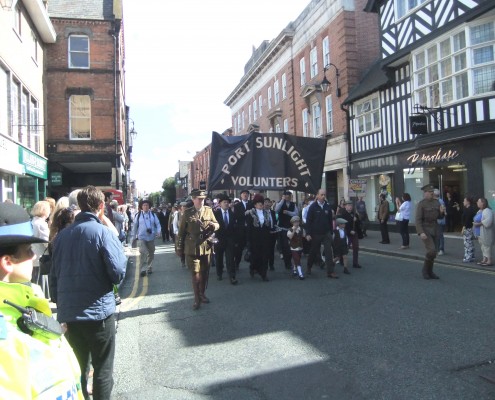 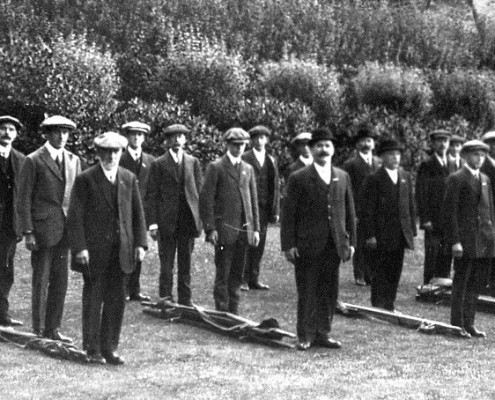 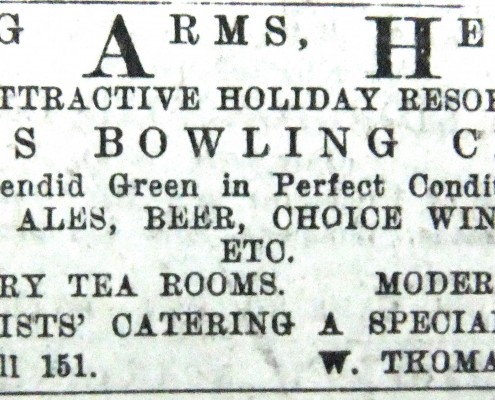 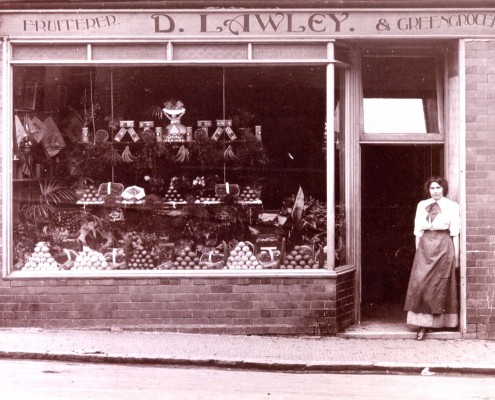 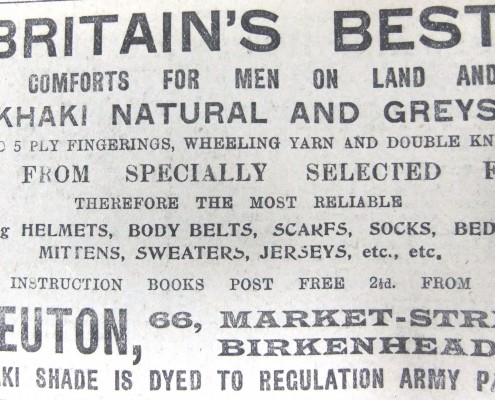 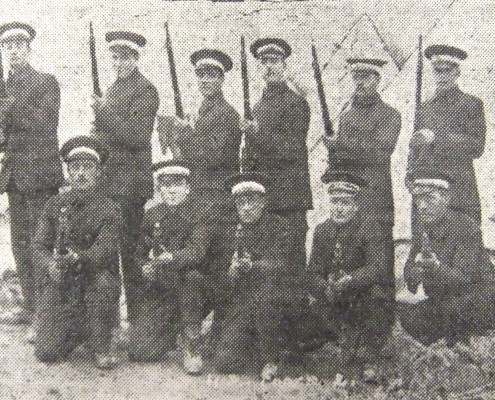 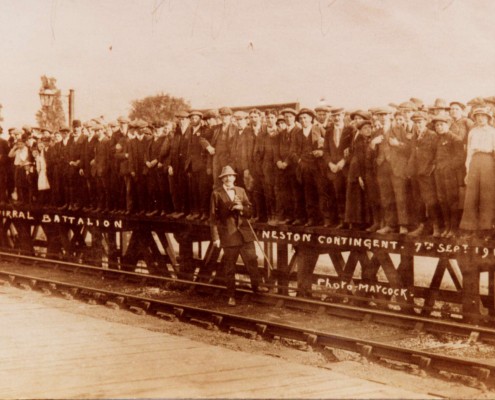 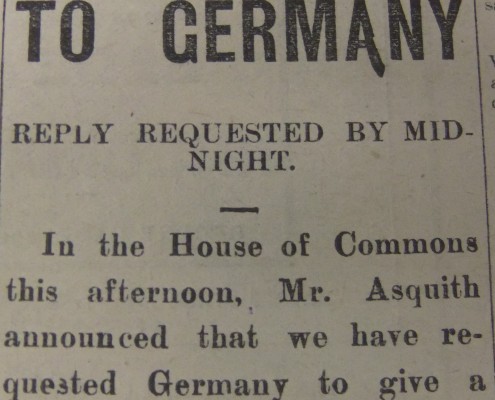 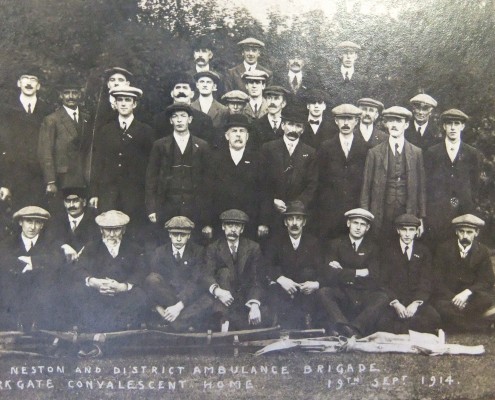 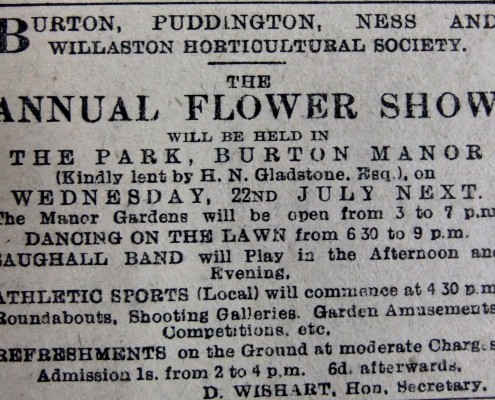 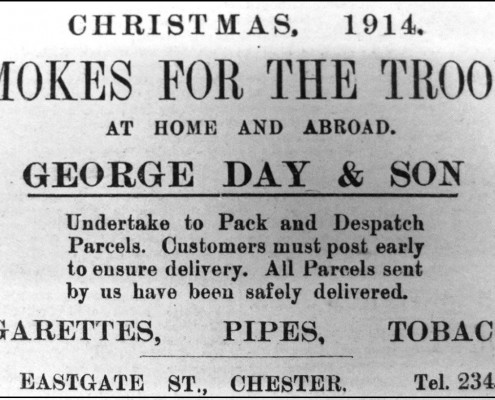 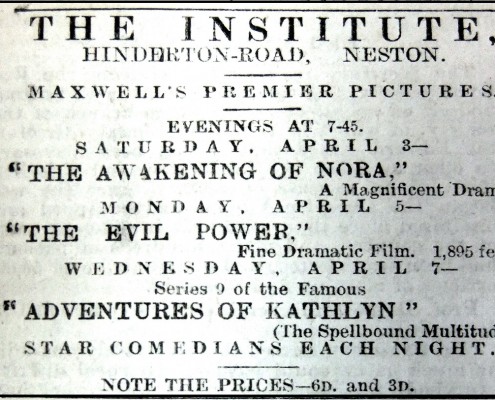 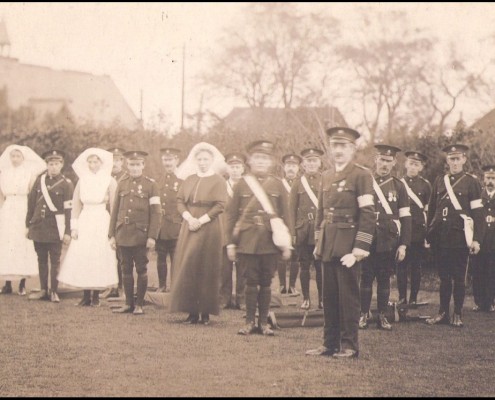 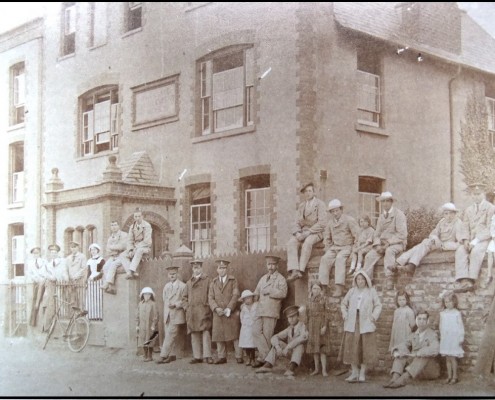 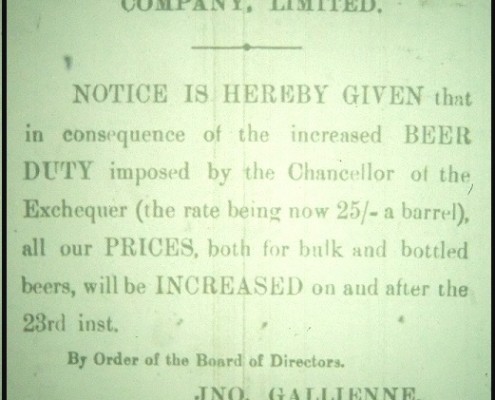 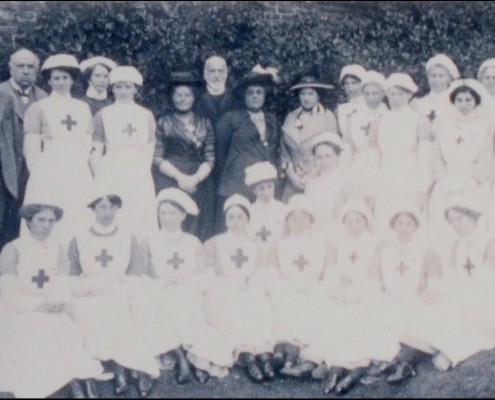 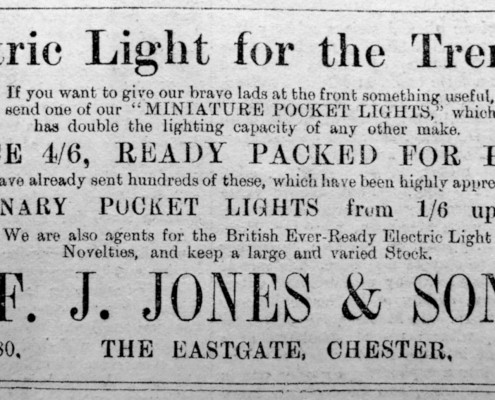 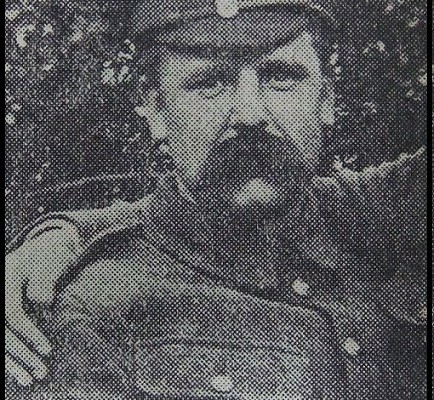 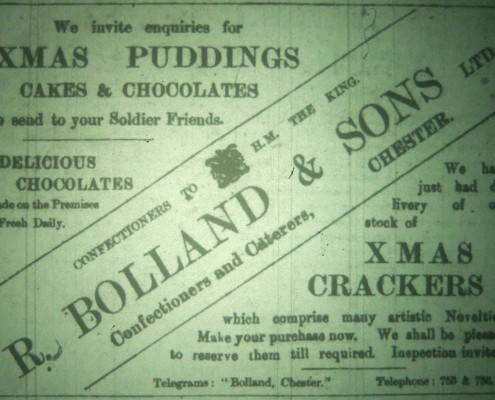 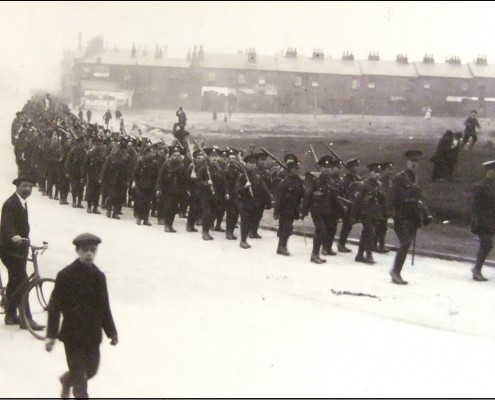