‘The Most Important Field in Neston’

Readers may well be aware of a bench installed on the Wirral Way near Church Lane a few months ago, paid for by Neston Civic Society.[1] It overlooks a relatively small field in which horses often graze. This spot is great place to stop and muse because, from my perspective as a keen landscape historian, I have always thought of this parcel of land as ‘the most important field in Neston’. The reason is that it exemplifies so many of the changes that Neston’s landscape has experienced over the centuries making it a very significant aspect of our local heritage. Let me explain, imagining that we are sitting on the bench facing ‘our’ field.

Look at the far side of the field: you will see that there are five low humps or ridges, each several metres wide, against the hedged and fenced boundary (Figure 1) – the ridges are permanently visible but easier to see in the winter when the vegetation is low. 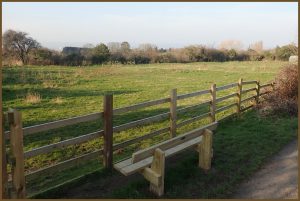 Figure 1: Our field with the ridges visible on the boundary

The shape of some of these ridges can also be seen in the field itself, running towards the Wirral Way. These are the remains of medieval ridge and furrow farming. Most of the field boundaries we see today did not exist in the Middle Ages. Instead large areas of arable land (known as ‘open fields’) were divided into long strips with furrows in between them with each strip allocated to one of the landlord’s tenants to grow crops; one person might tend several such strips scattered across various open fields. Our field and the land to the right across to Moorside Lane were all once part of just such an open field and formed part of  the Town Field, a name for what was generally a settlement’s principal open arable field. The ridges you see today are the remains of this corrugated landscape. Access to the strips came from what are today Church Lane and Parkgate Road. The ridges cannot be dated precisely but it is likely they were in place by the thirteenth century and, given Neston’s long history, perhaps considerably earlier. Similar fields occurred all over the Wirral.

Probably the clearest survivors today are those at Caldy (Figure 2). 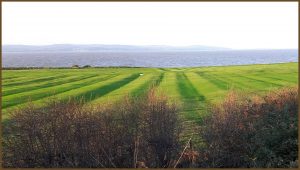 Figure 2: Remains of ridge and furrow at Caldy

The English landscape changed significantly with the advent of the process of enclosure. Over time, the long, individually-farmed strips were consolidated so that one person might now hold several adjoining ones; this was generally a much more efficient way of working. Boundaries – typically hedges in our area – were inserted to separate ownership and contain animals. Generally, the longitudinal boundaries (i.e. those to our left and right) would follow the lines of the old ridge and furrow, with a cross-boundary – like the one on the opposite side of our field – cutting through the ridges. Thus the open fields were divided into neat(ish) rectangles (or whatever other shape suited the landscape and the purposes of the landowner or tenant), creating the basis of our modern fieldscape. Again, we do not know exactly when our field was formed but the process of arable enclosure was largely complete locally by the early 1600s. It is quite possible that our field was made by then and it certainly existed by 1732 – the date of the first known local map.

Our field comprised a little over three acres (1.2 hectares). The 1847 tithe map of Great Neston township shows the field (Figure 3) and several others across to today’s Moorside Lane. You can see how the fields varied in width, reflecting different numbers of strips being aggregated. You can also see that many of the field boundaries are not perfectly straight as the ridges on which they were based were, themselves, not perfectly straight. While the ancient ridges in our field have, through chance, been partly preserved, signs of their continuation in the field beyond down to Old Quay Lane have largely disappeared due to centuries of ploughing. They are, however, clearly visible on Lidar images of the area.[2] 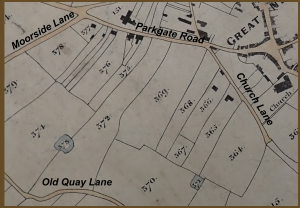 As England’s population grew after the Middle Ages, attention turned to increasing productivity of the land – important in an agricultural area such as Neston. One ancient improvement technique that was used locally was marling. Immediately on the other side of the far hedge is a large pond – visible by walking through the kissing gate to your left and down the long field where it can be seen to your right. This was once a marl pit. Marl is the clayey soil beneath the surface which would have been relatively calcareous (alkaline). This sub-soil was dug out in scattered locations, piled onto carts and taken to be spread across nearby fields (there are signs of a trackway leading to/from the pit). The effect was to improve crop yields, especially in acidic soils such as those found locally. As the soil is clayey, pits retained water so they would have soon turned into ponds. The fact that the pit abuts the field boundary which itself cuts through the ridge and furrow suggests that it was formed after enclosure. It seems likely this was considerably earlier than when it was first mapped, in 1814.

A period of rapid population growth was again the spur to use of another improvement technique exemplified by our field: liming. Like marl, lime is calcareous and was scattered on the land to improve fertility.  The lime was made from limestone and, at Neston, would have been conveniently obtainable from North Wales where it was quarried and carried over the Dee Estuary. The rock then needed to be burnt at a high temperature in a kiln. Kilns were unevenly distributed every three-quarters of a mile or so on or near the Wirral coast. One of these was in our field; indeed, the field was once called Lime Kiln Field. This kiln may well have been built in the eighteenth century, a period which saw a substantial increase in the use of lime as the population soared. A ‘house etc.’ was depicted on a 1732 map of the site. It is not clear if the ‘etc.’ included a kiln but one certainly appears to have been there later that century (Figure 4). However, all signs of it have now disappeared. The remains of another, later, lime kiln still exist locally, in the garden of the house immediately to the rear of The Harp in Little Neston. 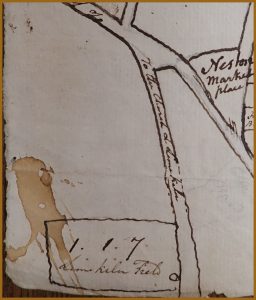 In 1866 Neston and Parkgate’s communication links were transformed by the coming of the railway – a branch line from the Chester and Birkenhead Railway line at Hooton which had been opened in 1840. The new line to our area facilitated the export of items such as agricultural produce, estuary-caught shellfish and, later, coal and farming equipment; it also brought easy access for day-trippers to Parkgate. The line of the railway scythed through the land and cut our field in two – the portion in front of you and the section behind you in which several houses now sit, fronting Church Lane (Figure 5). A railway signal post was once situated by the gates to your left. The houses are relatively modern but the one on the other side of the short path between the Wirral Way and Church Lane, The Nook, appears to have been built in about 1893, reflecting rapid population growth in the Neston area around that time. 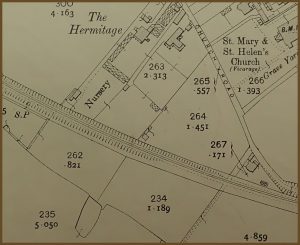 With the advent of motor cars, lorries and buses in the twentieth century, use of the branch line from Hooton, like so many others in the country, declined over the decades. One key user had been Wirral Colliery in Little Neston but this closed in 1927. The shellfish industry also declined as the extent of the saltmarsh grew. In the end passenger traffic ceased on the line in 1956 with the axe falling on freight traffic in 1962 (a year before the notorious Beeching report, incidentally); the line was redundant. However, three years later a member of Wirral Green Belt Council had the inspired idea of turning the route into the north’s first linear country park, calling it the Wirral Way. Formally opened in 1973, its development was a reflection of Britain’s growing prosperity and the public’s increasing leisure time. The Wirral Way is, of course, still much used and much loved today.

Our field and the adjacent spaces, then, reflect in so many ways the story of Neston’s landscape and life over hundreds of years. They are also a microcosm of what Neston is today – part rural, part developed and encompassing varied communication links. The field’s significance is such that I have put it forward as a candidate for the Local Heritage List which records sites of importance to local heritage but which are not formally designated as, say, ‘Listed’ or a ‘Scheduled Monument’. I also hope that one or more local organisations will consider erecting an information board at the site or nearby.

As you walk or pause here, think about all those who have gone before you on this very spot – the medieval ploughman, the surveyors setting out new field boundaries, the individuals making marl and lime and those spreading these materials on the land, the locomotive drivers and excited passengers, and generations of happy walkers and riders. I doubt that you can find a more interesting, historic or evocative field in Neston.

Notes: With thanks to Susan Chambers for map information supplied. All references are available upon request.

[1] For the location: go through the short path from Church Lane to the Wirral Way with The Nook on your left. The field is immediately to your half-right, where the Wirral Way splits in two.

[2] Lidar – short for ‘Light detection and ranging’ – is an aerial scanning technique which can reveal 3D historic features often not visible from the ground.