Memories of an Earlier Train Boy, 1930

In 1990 Jack Cox of Parkgate wrote an article for Neston Civic Society’s Newsletter (which I used to edit for many years). Jack lived at Port Sunlight as a schoolboy and used the train to travel to Calday Grange Grammar School around 1930 –  twenty-five years earlier than Geoff Wright who recently wrote a piece for Nestonpast.com about his journey from Neston to Calday on the last of the passenger trains on the line.

Jack’s journey started at Port Sunlight at 7.40 am when they took over the train vacated by the workers of Lever Brothers…

Eight boys were allocated to a compartment with a 6th former prefect in charge. No saloon or corridor coaches on our train. I don’t ever remember that the presence of the prefect affected our enjoyment of the journey; in fact he was often quite helpful when we had difficult prep to tackle….We reached Hooton just before 8am, running across from the ‘up’ fast line to Platform 6 which was the ‘down’ platform for the West Kirby line. 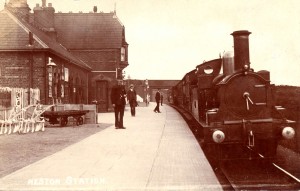 Apart from prep., borrowing or swapping  of ‘Bloods’ was another exercise which helped to pass the time. This was before the days of Dandy and Beano and the picture strip comics of the late 1930s. We could read and our ‘Bloods’ were full of reading matter not childish pictures. Rover, Hotspur, Adventure, and Champion were some that provided our adventure stories. If you were ever a Champion reader you will probably remember ‘Morgan the Mighty’ with ‘Chung’ wielding ‘Clicky Ba’ and clearing villains from the far-flung reaches of the British Empire.

Meanwhile our rail journey continued. We reached our highest point near Cuckoo Lane and then passing under Lees Lane bridge we rumbled down Neston Cutting. During the year the appearance of the walls of the cutting changed from dry sandstone to drooping damp vegetation, to dried leaves swirling in autumn and in winter to icicle festooned cliffs.  Much as it is today, but with the added interest to us of being on a train which in autumn and winter often seemed reluctant to come to a halt at the single curved platform of Neston Station. Wet leaves or frosted rails often meant a very juddery stop. The architecture of Neston Station was similar to that of Hadlow Road and the platform always seemed to have some agricultural equipment lying about. Here we were joined by the Exton brother whose father was headmaster of Neston Council School.

It was now 8.12 am and we left, passing under the Seacombe to Wrexham Railway line, over Burton Road and past Bridsons agricultural machinery yard. A steady right-hand curve over Church Lane bridge, a glimpse of the Church to the right and our first glimpse of the River Dee to the left. Joining the branch line from Neston Colliery we passed under Moorside Lane bridge and reached the Colliery sidings on what is now the picnic site above Neston Cricket Club. These sidings always contained a fairly large number of wagons, their contents probably scrap and equipment coming from the old mine. Passing through the sidings and over Station Road bridge brought us into Parkgate Station. I only remember one boy joining the train here. One of my researches tells me his name was Barry Smith and that he later became a well-known TV actor.

From now on we were generally in site of the river. Throughout the year we saw it in all its many moods. Golden sands at low tide with the Parkgate fishing boats heeled over at the edge of the gutters; at high tide a looking glass on the rare occasions that no wind disturbed the estuary and the boats lay motionless at anchor, but more often as the wind blew from the west, a vast area of waves and white horses with the fishing boats darting along with the sails pulled taut. And always across the river the details or just the silhouette against an ever-changing sky of the Flintshire hills with Moel Fammau the focal point of it all.

To stand at the open window of the compartment and look out at all this could stir the hearts and minds of young teenagers and drive away thoughts of prep or even Morgan the Mighty. But the train moved on. Views of the backs of the buildings on Parkgate Parade, through the cutting at Boathouse Lane, along the fields which now form part of Heswall Golf Course with a view of Gayton shore.

Heswall Station was our next stop. Again a dual track with two platforms and rather more imposing-looking station buildings.  After Heswall came the best views of the river. The two miles to Thurstaston were virtually unrestricted views of the river to the west, while on the east were Heswall Dales. I don’t remember anyone getting on or off at Thurstaston. Its station would be busiest at weekends when crowds of Lever Brothers’ employees came to spend some time at the company’s holiday camp, a series of wooden cabins on the site of what is now the caravan park.

Passing the camp, the line ran on quite a high embankment across a deep wooded valley, gone now, filled in with rubbish and  grassed over. Then came Caldy Station, single track, single platform of all timber construction. Usually no activity. It was now time to put away schoolbooks, bloods and anything else into bags and satchels and prepare for our imminent arrival at Kirby Park. Again single track, single platform, but with coal sidings on the west side of the platform. 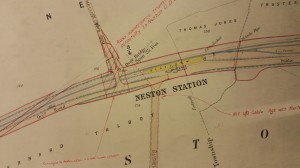 8.36 am, the train halts and we exit from the compartments at various speeds from mad dash to ‘creeping like snail unwillingly etc’. Show our contracts to the porter who stands like Horatius at the foot of the steps leading to Sandy Lane. He needed to be an Horatius type to maintain his authority over 30 or so energetic Caldeians at this time in the morning and at our return in the afternoon, At our various speeds we made our way through Kirby Park Village, past the Ring ‘o Bells and up over the hill, with once again a view over the mouth of the Dee, a view that is till available in 1990 unspoiled by buildings or marsh, and which recalls to me those enjoyable days of years ago.

For Geoff Wright’s account of a similar journey to Calday Grange Grammar School some years later see Reminiscences of a train boy.