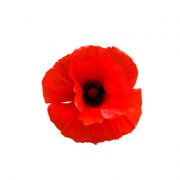 The Parish Church, dedicated to St Nicholas, stands in the centre of the village on the land rising from the road (The Village) towards the eastern extremity of Burton Wood. Commemorative plaques, for both World Wars, flank the interior entrance to the church from the porch at the western (rear) end of the building. From the nave, facing the entrance door, the WW1 plaque is to the right (north), directly beneath the second of the two wooden boards listing the Ten Commandments.

The rectangular plaque, with a central white marble tablet containing inscriptions and the names of 14 parishioners, has a surround of brown-veined marble and a convex upper edge (the form is known as nowy-headed). The cross and inscriptions on the plaque are inlaid in gold, the names of the war-dead are in black and are shown alphabetically. Two men recorded here, George Ashworth and Thomas Holmes, are shown also on the commemorative tablets in Neston Parish Church.