Neston Victoria Jubilee Lodge of the Order of Ancient Shepherds

Several ‘friendly societies’ had been founded in Neston before the end of the 18thcentury, a Great Neston Beneficial Society being listed in the Cheshire Quarter Session documents before 1794 (along with a Macclesfield Female Friendly Society and a Macclesfield Aged Female Friendly Society). We still justifiably celebrate the Neston Female Society, but Neston’s Victoria Jubilee Lodge of the Order of Ancient Shepherds was hugely popular at the turn of the 19th and into the 20th century, and there were other similar groups including an Oddfellows’ and a Foresters’ lodge. The term ‘Shepherd’ was utilised to signify ‘caring for’ and had no actual connection with those looking after sheep on local farms.

The Neston Shepherds’ lodge was founded, like the Town Hall, to celebrate Queen Victoria’s fifty years on the throne in 1887, and it briefly used the old drill shed that pre-dated the new town hall, finished in 1888. The Order was a sickness and benefit friendly society, collecting subscriptions and paying out to its insured members. It started as an off-shoot of the Heswall lodge but soon outgrew its neighbour. 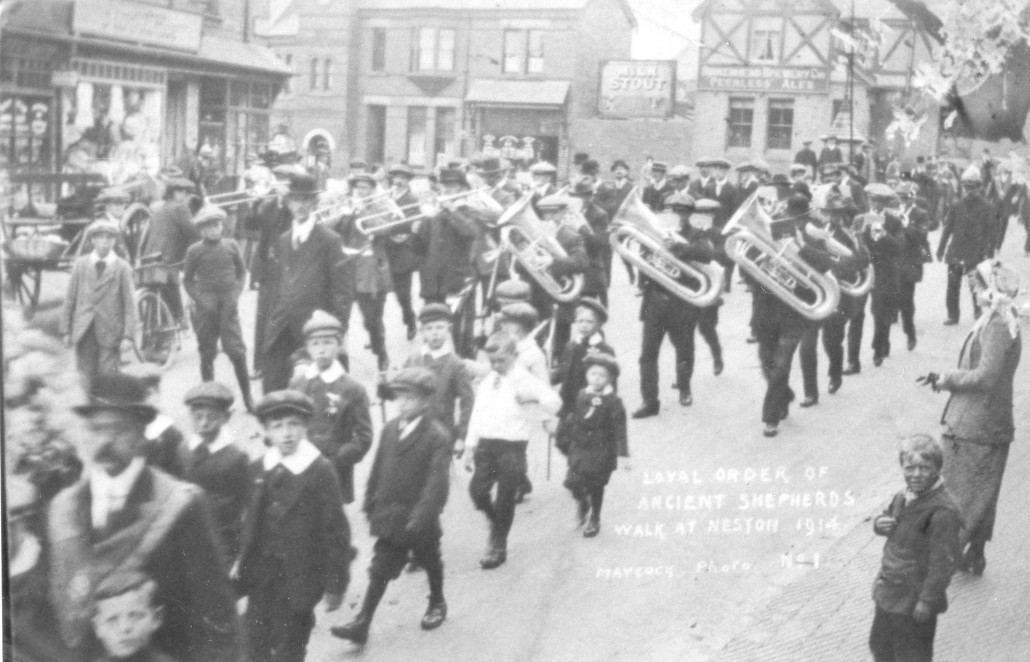 The 1914 Walk, showing the juvenile section.

The 1890 annual walk on a Monday in mid-July included visiting the homes of honorary members, and this became a significant feature of their future walks. Members set off from the Town Hall at 9.30am carrying their crooks decorated with coloured ribbons, with the huge silk banner and led by the Neston Volunteers’ Band. They called on Colonel John Lloyd, saddler and a leading light of the Order, who lived where ‘Oriental Flavour’ the chip-shop in High Street (latest in long line of names), is sited, processed along Leighton Road to Park View, Broad Lake, Leighton Hall Farm and Richville, (later the Parkgate Hotel) and back along the Parade to the Parish Church. A suitable selection was played by the band at each of the houses.

On leaving the church service, where the sermon included the advice that being able to drink hard was no longer regarded as a mark of manliness, they processed to the homes of Mr Pritchard in Little Neston, Thomas Clarke at Windle Hill,  Matt Clover at Rose Lea on the corner of Bluebell Lane off Quarry Road, and Reginald Bushell, Hinderton Lodge. Dinner in the Drill Hall (Town Hall basement) was enjoyed by 130.  As with the Female Friendly Society, there was dancing on the green (on the site of Churchill Court) in the evening.

The first medical officers were Dr Russell from Vine House and Dr Blunden, the latter claiming to have brought most of the members into the world. Dr Russell admitted that they only allowed men who were in good health to join the lodge.  Views were regularly expressed at their gatherings that something should be done to organise old-age allowances, though without the expense burdening the ratepayer; there was a feeling that the scheme should be worked by the friendly societies and so would reach the deserving members of society instead of ‘every Tom, Dick and Harry’.  A state pension was finally paid in 1909. The symbolic crook, now without its wooden handle.
Our thanks to Mrs Joan Norman. This belonged to her ancestor Jonathan Mellor junior.

By 1896 membership had grown to 150 and there was a juvenile branch. A new banner was being used, with borders of scarlet and green silk, with a shield in the centre with the order’s coat of arms. On the reverse was a scene of a sick room with a prostrate father surrounded by his family, and a man in the robes of the Shepherds handing a purse to the wife. ‘Help in the time of need’ was the motto.

Miss Johnson’s café (old Ethel Austin, later charity shop) housed the headquarters and lodge room by 1900 and for many years afterwards.  At the 1908 annual gathering, by now in mid-June, Colonel Lloyd, responding to the patriotic toasts in the drill hall later, expressed his regret at the loss of the old Volunteer Force (1st Volunteer Brigade Cheshire Regiment) after fifty years. This had been established with the encouragement of Christopher Bushell and Duncan Graham in 1859 and had been a popular interest for many local men, until drastic reorganisation into the Territorial Force (with no Neston branch) in 1908. The speakers at all the Shepherds gatherings over the years had made a mention of the Volunteer Force, though not of the Neston Female Friendly Society. Colonel Lloyd hoped that someone would come forward and organise a Territorial force and a town band so they would not need to employ the Connah’s Quay Prize Band. 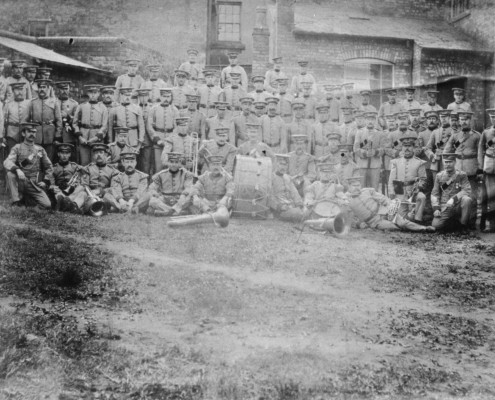 The Neston Volunteers Band who were disbanded 1907.

There was also a female branch there, which Bro H N Gladstone was sure his wife Maud would like to join.  Maud Gladstone was much involved in organising the Parkgate Red Cross Hospital at the time, and many events in Chester, but maybe she found time to join the ladies of Hawarden.

In Neston it was reckoned that sixty Shepherds members were serving in the war in 1916. One of them, Private John Pyke died in May of that year and a number of members attended a memorial service for him in the Parish Church, with their crooks draped with black crepe. Bearing their crooks thus was a tradition that was followed for many Shepherds’ funerals.

It is easy to discover the date of founding of such an organisation, but we are not clear when it finished – any information welcomed.

The ‘Shepherds Friendly Society Limited’ still exists today as non-profit making mutual society with a board of Directors.