It’s an old address but is it the right one? 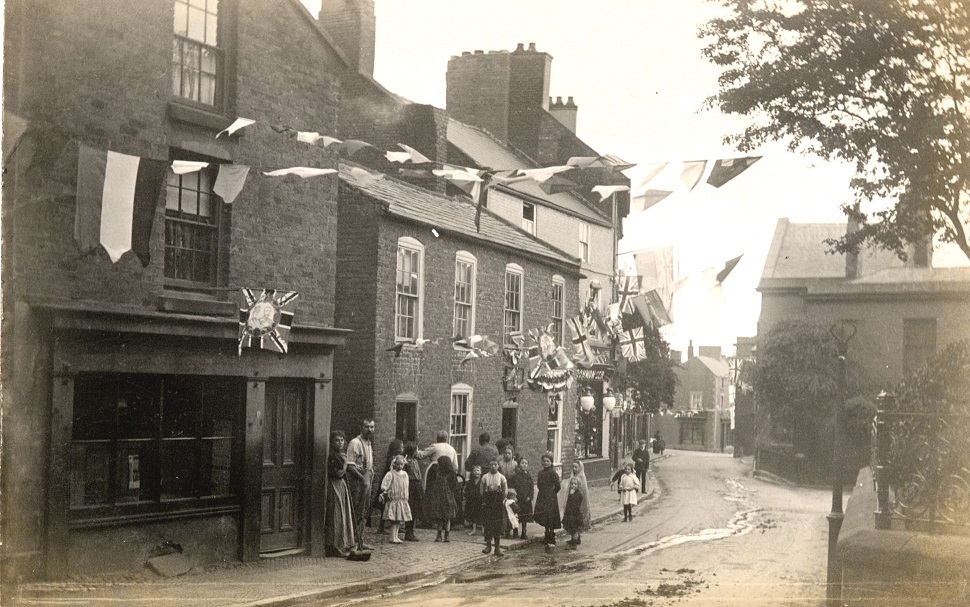 The people are standing at the entrance to Pykes Weint, probably at the time of the Coronation in 1911. The building on the left was Pykes in the 1770s. The building in the centre is the site of ‘the chemist’.

Recent building work in the town will result in some new flats having the address of ‘Pykes Weint’, though it is to be hoped the Weint attracts a different type of resident than it did at the end of the nineteenth century.

We have to go back to at least the 1770s for a first mention of Pykes on that spot, when John Pyke, a baker, lived in a three-storey house on the site of the current estate agent. In earlier decades it had been an inn, Bollands, with its own brewery and kiln at the back.  On the far side of that, where John Evans’ shoe shop stands, was an old inn called the Seven Starrs, which even in the 1740s was an old decrepit building.  Pykes had a barn and bakery, probably at the back of the house, which had recently been burned down and a barn across the road where Hallwood stands.

The narrow passage up the side of Pykes house and bakery had a number of small cottages which like other yards and weints off  Neston’s main street, housed the poorer families of the town in bad conditions. These four or five cottages were  in a row behind  the house on the ‘chemist’ site. On the north side were a few known as Gleave Cottages.  The Weint had housed an odd selection of buildings over the years; one had been a court house in the 1830s for the old Wirral Hundred court, and one cottage housed evening classes in the 1850s.   It was said in 1897 to have the reputation of being the roughest quarter of Neston, and Constable Dutton found himself being attacked there, but luckily was rescued by two local butchers, Thomas Swift and Samuel Hancock.  Fisherman James Evans paid the price with a month’s hard labour.

The police in fact had regular battles with problematic customers in the Weint. Private J. Williams, fighting in the  Boer War in South Africa in 1900 wrote home that he had been reading in the paper about ‘The Battle of Pykes Weint’ where a relief party arrived and took three prisoners. In 1900 one Esther Littlemore was in court for ‘keeping a disorderly house’ – three months with hard labour.

By 1912 Neston Council was tackling the problem of poor housing and sanitation and orders were being given to landlords to improve properties or face closing orders; by November 1912 most of them were empty, some of the last occupants were George Fewtrell snr, Betsy Peters and Sarah Mellor. In Gleaves cottages at this time were George Fewtrell jnr and Mrs Minshull.  By 1913 the old cottages were finally demolished as being unfit for habitation though some residents had to be threatened with police eviction to get them to leave, and the council said they would go ahead with jail if necessary.

J.Tozer built a stable there in 1915 – perhaps the plain brick building which seemed to do nothing until very recently. The weint became just an alleyway to the yard at the back until the Brook Street shops were built, when it was used as a short cut between the car-park and  High Street. 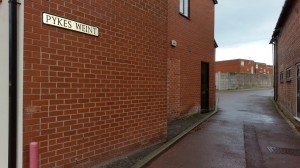 In the early 1900s, Pykes Weint had a different name, mentioned in council discussions and on a planning application:  ‘Church Avenue’, perhaps in an attempt to change its image, though the historic, more characterful  name is on the street sign, so that is  presumably the official one.