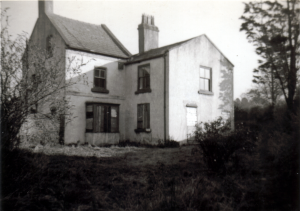 In the summer of 1937, a new horse was needed for Neston’s Team Labour.  Little Neston farmer Robert Scott, who had Ivy Farm and White House Farm at the
time, had been helpful before inthe purchase of horses, so he was called on again.  He  managed to locate a 5 year-old bay (reddish brown) gelding, 17 hands high, blaze (a wide stripe down the middle of his face), near hind leg white. The horse, Tommy, was examined by the vet, Mr Baird of Cranmore, Hooton (a practise established in 1873 and still going strong) and classed as sound.

Tommy was kept in one of Scott’s fields whilst on what was supposed to be a week’s trial with the council.  However, the Council were reluctant to come to a decision about buying him, and Mr Scott threatened to stop them taking  Tommy out of the field, saying he would just as soon see him going for a month’s holiday out at grass.

So the Council came to a decision and Tommy was given the job of hauling the council’s refuse and general carting, which he did for twelve years. By 1950 it was time for him to retire from such heavy work but he was considered to be still fit for other jobs, so the council advertised in the Echo, inviting expressions of interest.

Councillor Reg Chrimes reported that the RSPCA were concerned that Tommy might be sold for slaughter, so he was hopeful the charity would allow him to go to their home for retired horses. The Council’s  Clerk pointed out that the District Auditor would first have to be satisfied that all reasonable steps to sell him had been taken.

Several offers were made; W. K.Nicholls of Parkgate Parade offered £20, (he had offered to take Betty the old mare a couple of years previously), Bensons offered  £15 for the horse with cart, there was even an offer from a lady in Formby and a cartage contractor in Liverpool.  The highest offer was from Gordon Cowie of Goldstraw Farm in Ness who offered £25; he had just taken over that farm and would find the horse useful. Various equipment was included , harness, bridle and such like, plus 40lbs of bran for 7s 6d  and 40lbs of brown oats for 9s 6d.

Presumably the District Auditor was happy with the deal.