The war in Europe still dragged on as the grim story of Passchendaele and its battles was unfolding, but General Allenby was making some progress in the Middle East, where the 4th Cheshires (including Neston men) were busy in Egypt and Palestine. Revolution was keeping Trotsky and Lenin busy in Russia. 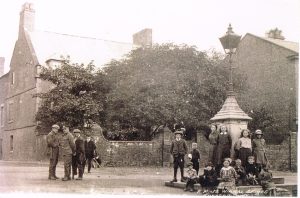 Neston casualties in Flanders included 39 year-old Private Alf Jellicoe, killed in action on 23rd September. He had one brother at the Front and another about to go. It was said that returning to the Front from leave recently, Alf had a sort of presentment that he would not come back home again. Private Thomas Downey died at Ypres on the 9th September; his family were from the Colliery, and Thomas had joined the 16th Cheshires (Birkenhead Bantams) early in the War.

Gunner Jack Whiteway, known locally as ‘John Bull’, manager of the butcher’s shop on the corner of Raby Road was injured in France but expected to recover.

In the last two weeks seventy-four injured soldiers had been brought to the hospitals at Parkgate and Neston, wounded in the fighting at Ypres; both hospitals were now full. 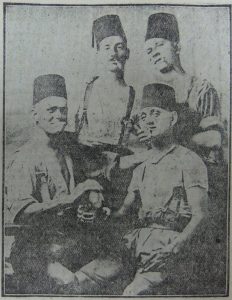 Wirral men from the 4th Cheshires in Egypt

Some well-known towns-people died this month, including Mrs Scott from Penketh House, the sandstone house on Church Lane next to the church. This family had rebuilt the frontage of the old building that now houses the newsagent on the Cross, and they owned the brickworks on the corner of Marshlands Road and Burton Road.

Mary Kerns, who ran the Telephone Exchange had just died, her late husband Edward Kerns had been the rates and tax collector, Ladies Club Secretary, newspaper reporter and general friend and support to the poorer classes, and Edward’s father had been a Neston police sergeant. James Birch, tailor and outfitter of Bridge Street, 35, was another death reported this month.

The Parish Church magazine carried a piece about the public crowding into the church-yard at funerals with sightseers including dirty children running around getting in the way of mourners, and sometimes crying children disturbing the funerals. It was decided to close the churchyard to the public when funerals were taking place.

The churches feature a lot in these months, obviously playing a big part in keeping the town functioning. On Sunday at the end of September, the Vicar announced that Neston’s Red Cross depots were not very busy since the holidays. The depots made clothes to send to the troops, and the Vicar pleaded for new helpers to commit to an hour or so each day as winter was approaching.

It was harvest festival time, and the several churches all had services, including the Salvation Army on Park Street, where the produce was auctioned for the organisation by Mr Sowden, the Baptist Colliery Hall – proceeds to the wounded soldiers, also Little Neston Methodists, Neston Methodists and the Parish Church. The Congregational Church (where Legion is now sited) had a musical event in the evening with Mr Rostance on the organ. The Congregationalists had just had a new minister, Rev Herbert Stocks, and Lord Leverhulme, who had built and endowed the church being an ardent Congregationalist was on-hand, promising advice and support at any time. 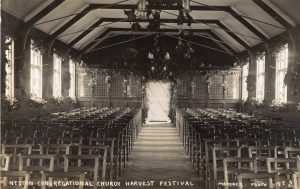 The Vicar, Rev Charles Brooke Gwynne, had a brother, Llewellyn Gwynne who had been consecrated as Bishop of Khartoum in 1908, and on one of his visits to Neston he talked about the deeds and exploits of our lads in France where he was Forces Chaplain. A sports event had apparently involved Bishop Gwynne running a three-legged race attached to a Liverpool Catholic padre much to the delight of the troops. He was mentioned in despatches by General Haigh. Bishop Gwynne was a man with a fascinating lcareer in the post-war years.

The Parochial Church Council was urged by the Vicar to look to the future and think about what form a war memorial could take, but meanwhile the finances were a big worry, and Mrs Gladstone (daughter-in-law of the late prime-minister, and organiser of the Parkgate Hospital) gave a generous donation to the purchasing of St Thomas’s in Parkgate. Reducing expenditure in the face of many commitments and falling-off of subscriptions meant no school treats nor choir treats and reduction in the schools prize list. Landlords of property used by church groups such as the quoits club and cricket and football teams were being urged to forego rents.

The Urban District Council was also thinking ahead, and were keen to submit a scheme for 100 workmen’s dwellings after the war, providing of course that Government would finance them. Meanwhile they agreed to relax the lighting restrictions for the town, provided that no lights would be seen from the river.

Three men from the Colliery were had up for illegal fishing in the estuary with fixed nets. James Belton, though working down the pit for good money (being a protected occupation) was one of those involved and he had on a previous occasion attempted to bribe a bailiff not to report him. He and John Wynne were fined 10s. Two more men, Thomas Hare and George Norman were charged with the same offence and also obstructing the officers of the Board of Conservators of the Dee Fishery District together with a hostile crowd that had gathered on the sand. The men’s defence was that they were doing national service by catching fish for food. 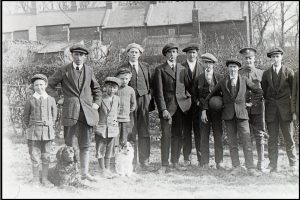 Early October, and war or no war, there was football; a crowd of 25,000 watched Everton and Liverpool (2-2), the first of six fixtures between the two teams. Glorious weather and a 5-0 victory against St Helens Alexandra at Prenton Park must have cheered up Birkenhead a little.

Monday 17th September, 2-3am was the time appointed for a return to Greenwich Time. British Summer Time, an idea introduced the previous year, was generally regarded as being a successful venture.