During the post-war years the Mellock Estate was built and I was born at number 28 Mellock Lane. They were what we call social housing today, though most of them have now been sold. My father used to say how well built they were, and he was right, considering the builds of today. 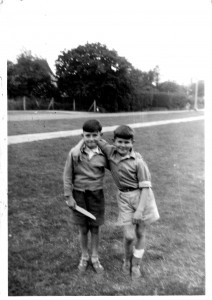 Robin (with stick/?balsa wood aeroplane) and friend, on Mellock Lane.

Every house had built-in wardrobes which were considered quite posh in those days. They also had, and still have, brick-built outhouses which were used for storing coal. Everybody in those days had open fires and any hot water we used  was heated up by back boilers behind the fire. The hot water was stored in a big copper tank in the airing cupboard.

The other part of the outhouses were furnished with copper boilers connected to the gas supply for doing the family washing. This was before the advent of washing machines and nearly every family did their washing this way. My mum had a  dolly-tub with which she did the weekly wash, complaining of a bad back at the end of the washing day.  Needless to say that sometimes the washing had to be done again because of smuts from the smoke from the open fires if the wind was in the wrong quarter. I used to hear my mum cursing, (damn and blast, she used to say).

Every house had a good-sized garden and because the estate was built soon after the war most of  the families grew their own produce to feed their families, carrying on the mentality of the war years when most food was rationed.

There was a very good community spirit between people where they supported and helped each other. I remember my mum giving a Sunday dinner to four children who lived further up the road because their mother was ill and their father was in the army. I don’t think many people were what you would call well-off but they had the cohesive spirit that is not around today. Families used to borrow loaves of bread or a pint of milk from neighbours until the shops were open the next day, or pay-day when they had money.

As children we used to charge around the estate during the six week summer holidays from school on our home-made trolleys, scooters and bikes.  It was safer because not many people had cars and the roads were quieter. At the top  end of Mellock Lane the road used to go over the Hooton to West Kirby railway line, then turn sharp left down the hill to Neston South Station. We used to use these quite perilous inclines to freewheel down on our trolleys, often with two or three of us on the trolley at the same time. Needless to say it very often resulted in the trolley crashing into the fence and hedges at the bottom and somebody suffering scrapes, cuts and bruises but it never put us off doing this, as the thrill of speed downhill outweighed the pain afterwards. At the bottom of the hill, opposite the station was a market garden with a small shop owned by a Mr Withers. A lot of the families on the estate used to buy their fruit and veg there.

We used to carry on down past the station into Station Road to the park entrance and sometimes spend the whole day playing in the park, taking with us some jam ‘butties’ and a bottle of water. Halfway down Station Road was a railway marshalling yard where tons and tons of coal were brought to be sold on to the various companies that distributed and sold it.

I also remember when three or four of us went to the different streets of the Mellock; there were usually gangs of children out playing the same as us and if we weren’t welcome there they used to shout “Get down your own end”, meaning get back to your own street or road. This usually resulted in minor skirmishes when we refused to go.

I remember when Bonfire Night came round, different gangs of children used to build their own bonfires in someone’s garden or on a piece of waste ground. There was always a competitive spirit about who could build the biggest, and there were always fights and fallouts over procuring the wood and material for these gigantic pyres.

Much of the land around the Mellock Estate was not built on in those days, which afforded us children plenty of places to play and build our dens and climb trees, but sadly this is not the case today. We also used to lean over the fences at the top of Mellock Lane bridge and watch the steam trains going to and fro on their daily timetables taking passengers and goods to Hooton and West Kirby. When the line shut down in the fifties there were only coal trains using it and we used to play around the unused deserted station. 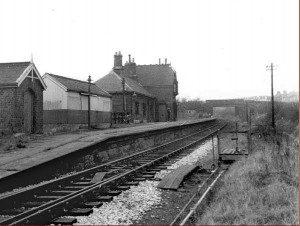 I remember asking the guard on one of these good trains if he could give us a ride in the guard’s van to Hadlow Road Station in Willaston. He duly obliged and warned us to sit still and behave ourselves. It was fascinating for me to do this because of my love of train-spotting. There were four of us that travelled up to Hadlow Road and the only downside of this was that we had to walk all the way back home.  I often said to my dad that I wished we lived on the side of the Mellock Estate that the trains ran through.

Times change and people and things change, but not necessarily for the better. I will never forget my childhood living on the Mellock Estate; although we didn’t have much we had an adventure every day.