Neston Institute was built by William Lever as a Liberal Club in the early years of the 20th century and  experienced a somewhat chequered history, before it opened in early February 1916 as an Auxiliary Red Cross Hospital to cater for the ever-growing numbers of injured soldiers being brought back to Britain. The Parkgate Hospital on the Parade had  opened in October 1914, with thirty beds, and ten more added in November 1915, with well over 200 patients treated. There were several Red Cross hospitals in Wirral, including the Chalet at Hoylake, Manor Hill in Birkenhead, Stoneycroft in Wallasey , the Vernon Institute in Saughall, and one in Bromborough, in addition to several in Chester city. 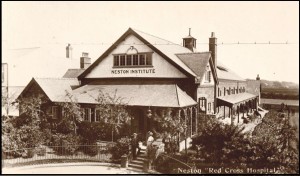 The new Neston hospital was open to the public for the day on February 10th, and hundreds of visitors braved the biting cold to have a look inside.  A building beautifully decorated in the Swiss chateau style, according to a local reporter, calculated to arrest the attention of the most casual passer-by, (and we never noticed!). William Fleming’s building company, a large Neston concern, had done the interior work and the visitors were well impressed.

Refreshments throughout the afternoon were provided by the two ladies in charge of Neston Red Cross, VAD Cheshire /62 (Neston), Lady Hill  (wife of  the Secretary of the Liverpool Steamship Owners Association), who was the Commandant,  and Mrs Pemberton (wife of  the Chairman of Neston Council, five serving sons) who was Vice President. In addition to  a number of Voluntary Red Cross nurses, there would be two trained staff nurses, and the professional services of Dr Grant (who lived on Station Road opposite to the Cricket Club), and Dr  Gunn from Beechways House at the library end of Church Lane. 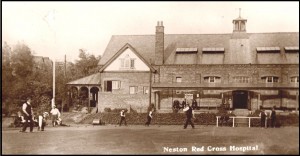 Carefully chosen colours to match the rooms were used throughout, restful green, flushing pink and rose in the ‘tonic’ departments and steady blue for normal conditions.  There was a thirty-five bed main ward and an observation ward with further five beds.

The stage was converted to what was described as ‘a snuggery of recreation’.  The visitors viewed the patients’ dining room, doctors’ room, a nurses’ sitting  room done with dainty chintzes, a kitchen, stores, and three billiard rooms upstairs.  Four thoroughly modern bathrooms had  baths that could be refilled every quarter of an hour from a massive copper cylinder.

Mrs Pemberton, Lady Hill  and Mrs Whineray from Leighton Court lent furniture, Miss Whitehead tables and glasses, Miss Makin teaspoons, Miss Whineray dinner services, and Miss Cowan of Seaward House in Parkgate gave serviette rings.  These items were probably for the use of the nurses rather than the patients.  Oakes and Griffiths (building on Parkgate Road with the pillars) supplied all the baize (?for billiard tables).

Lounge chairs were donated by Neston & Parkgate Laundry, and a couch by the fireplace was given by William Fleming & Co.

The public who wanted to be associated with the hospital still had plenty of opportunity to contribute – things were needed such as bath sponges, hot water bottles, brushes, razors, ash-trays, kitchen equipment and so on, providing opportunities for everyone to feel they were doing their bit.