The Old Quay at Parkgate is currently closed for refurbishment but the inn which originally occupied the site was first established by William Williams Mortimer, who is perhaps better known as the author of The History of the Hundred of Wirral, in 1854. Local newspaper accounts reveal that he met with a certain amount of opposition from local residents.  Born in Liverpool, he also lived at various times in his life in Birkenhead, Chester and, for a brief period in the 1850’s, in Parkgate.

William Williams Mortimer was born on 21st September 1797 and baptised at St George’s Liverpool on the 7th November 1797. he was the son of William Mortimer, merchant and his wife Eliza (nee Williams). In 1820 he married Sarah Hayton Radcliffe, daughter of John Radcliffe, bookkeeper. At the time of his marriage he was living at Walton on the Hill. Like his father he was a merchant and also a ship owner, importing goods from Portugal, Newfoundland, the Americas and the West Indies. A member of the Liverpool Ship Owners Association, in 1827 he was deputed, along with another member of the Association, to go to London to present petitions to both Houses of Parliament complaining about the effects of the recent changes to the Navigation Laws.

By the 1830s he was living in Birkenhead where he was an active member of the parish of St Mary’s Church. When his wife, Sarah, died in 1833 ‘ after a protracted illness’ she was buried at St Mary’s. In the following year he married widow Mary Atherton. William and his wife lived in Waterloo Place in Birkenhead and he is listed in Gore’s 1843 Directory for Liverpool as an accountant at that address.

He was active politically, supporting George Wilbraham, Liberal MP for Cheshire in the 1830s and William Jackson who was elected MP for Newcastle Under Lyme in 1847. William Jackson was Chairman of the Birkenhead Improvement Commissioners from 1842-1846 and was one of the business men involved in the industrial expansion and development of Birkenhead. In 1843 he requested permission to access the documents of the Birkenhead Commissioners to assist him in writing his account of the history of Wirral. The book was eventually published in 1847 as The History of the Hundred of Wirral, with a Sketch of the City and County of Chester, compiled from the earliest authentic records. He dedicated the book to William Jackson, adding that it was at his suggestion that he embarked upon writing the book.

By this time William was living at 6 Mortimer Terrace, Hamilton Square and in his sister-in-law from his first marriage, Mary Radcliffe, was also living at that address when she died in 1850. In 1848 the Historic Society of Lancashire and Cheshire was founded and William became a member. Vice President, later President of the Society, was Sir Edward Cust of Leasowe Castle who was also, for many years, senior magistrate of the Hundred of Wirral.

Soon afterwards, around 1851, William and his wife moved to Chester where they lived at Grey Friars on the City Walls. William became a member of the Deva Lodge of the Freemasons in 1851, was a member of the Chester Board of Guardians and was elected overseer of the poor at Holy Trinity church in 1853. He was also the Parkgate and Hundred of Wirral agent for the Provincial Life Fire Insurance Company for Wales.

Parkgate and the Chester Arms

Amongst the properties offered for sale when the Mostyn Estates were sold in 1849 was Chester House in Parkgate. In 1851 William Williams Mortimer became the owner and two years later he applied for a licence to open it as an inn and hotel. In his book he had noted the possible potential of Parkgate-

…The improvements which have latterly been made at Parkgate, entitle it to a greater degree of support, as a watering-place, than it has recently received…

He would also have been aware that a Bill had been passed in 1847 permitting the provision of a railway line connecting Parkgate to the Birkenhead to Chester line at Hooton. There were also suggestions that a line might be built across the Dee to Flint, allowing an easier connection to Holyhead. In fact the line was not opened until 1866.
His two applications for a licence were refused by the local magistrates. When a third application was to go before the magistrates in 1854 a ‘memorial’ was presented to the them by local residents, setting out their objections on several grounds: that first and foremost no additional provision was necessary there being already seven inns in the place, that it would result in increased drunkenness, damage existing businesses and disturb their enjoyment of their recently purchased Parkgate properties. When William’s application was, on this occasion, successful the Liverpool Mail (Liverpool Mail – Saturday 02 September 1854) strongly condemned the magistrates’ action in granting the licence and ignoring the representations of local residents.
They published the objections presented in full.

‘To the Magistrates acting in and for the Hundred of Wirral, in Petty Sessions assembled.
‘Gentlemen, —We, the undersigned, beg leave to address you, with reference to the application now making, for the third time, by Mr. William Williams Mortimer, for a license for a house and premises at Parkgate, in this hundred.
‘We beg leave to state that, in our humble opinion, there is not the least necessity for any additional inn or public house in Parkgate, there being no less than seven inns and public-houses there-a number more than sufficient for all the wants and requirements of the place.
‘We take leave further to point out to the magistrates that it has always been found that, where the number of public houses has been increased beyond the actual public requirements of the place, the result has been not only unfairly to injure the inns and public-houses already existing; but too generally to lead to a great increase in the vice of drunkenness, by the increased competition for custom produced by the establishment of any new public-house; and we believe may, without at all exaggerating the facts, state that the vice of drunkenness is one already painfully prevalent amongst the lower orders in Parkgate.
‘Mr Mortimer, we understand, states that he contemplates his house, if licensed, being used more especially as a boarding- house; but it is perfectly obvious that it could not profitably be occupied solely in that way—nor is a license necessary for any such purpose. When once a license is obtained, there are no means of preventing a house being occupied as an ordinary public house, which, it cannot be doubted, would be the result in the present instance.
‘We take leave further to submit that the pleasures and advantages of Parkgate, and, indeed, of any other watering place, almost, if not entirely, depend upon the quiet and orderly character and comfort the place, which is always encroached upon the existence of any public-house, however necessary such houses may be.
‘ We beg further to represent that many of us are owners of individual houses closely adjacent to the one in respect of which the present application is made, and which we have purchased with a view to our own individual occupation and enjoyment, without the most distant idea that any new public house was ever likely to be established in our immediate neighbourhood, or that our property and its quiet enjoyment would in that way be prejudiced, as it clearly would be, by the granting of the present application.
‘ We well know that the magistrates are not influenced by any personal or private consideration either in granting or refusing any such applications, but we feel assured that they would not prejudicially affect the comforts, much less the interests, of those who are concerned in the matter, except on the ground of the clearest necessity for doing so ; if that could be shown we should not (however much opposed it might be to our own individual interests) make the slightest objection to the present application ; but feeling perfect}y confident as we do that no such necessity can be shown to exist, we humbly and respectfully entreat that you will refuse the present application.

They reported that residents had met at the Mostyn Arms in Parkgate, chaired by Reverend G. W. Gleadowe, vicar of Great Neston, to decide what action to take and had resolved :-

’ That a representation be made to the Secretary of State, complaining of the magistrates having granted a license for a public- house in Parkgate, where none was required, and without having read and duly considered the objections to the license set forth in our memorial’. (Liverpool Mail – Saturday 02 September 1854) 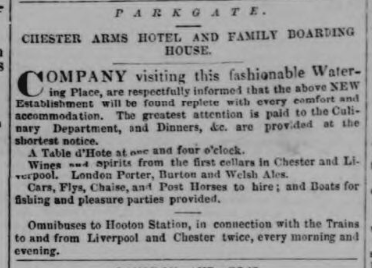 William’s robust letter in defence of his licence application was published in the Mail (Liverpool Mail – Saturday 09 September, 1854) the following week although the newspaper chose not to publish another letter on the subject from ‘A Cheshire Magistrate’ on the grounds that it was anonymous. The Mail reiterated its condemnation of the magistrates and suggested that William’s evident acquaintance with one of the magistrates, William Jackson MP, to whom his 1847 book was dedicated, may have been the reason why the licence was granted on this occasion. There were, as William pointed out in his letter, seven magistrates on the bench, including Sir Edward Cust.

In his letter William maintained that the licence had been refused previously because the premises were considered unsuitable and that he had completed alterations which overcame that objection. He also considered that was a need for increased accommodation for visitors in Parkgate and suggested that one of the signatories, had plans himself to revive the licence for his own house, lately purchased, under its old name ‘The Old Talbots’.
However the complaint by the local residents, if it was in fact sent to the Secretary of State, was obviously ineffective and the Chester Arms opened for business.

William’s wife Mary died in December 1858 and in April the following year the Chester Arms was advertised to be let. In June 1859 the property passed to Mr John Hodgson.

William returned to Birkenhead and the 1860 electoral register records his residence as 6 Catherine Street and his ownership of six houses in Ruabon Street. He died two years later in June 1862.

In 1862 the licence was transferred briefly to Richard Crafter, formerly of Rock Ferry, and in 1863, following his death, the property was conveyed to Charles and Nathanial Cook. 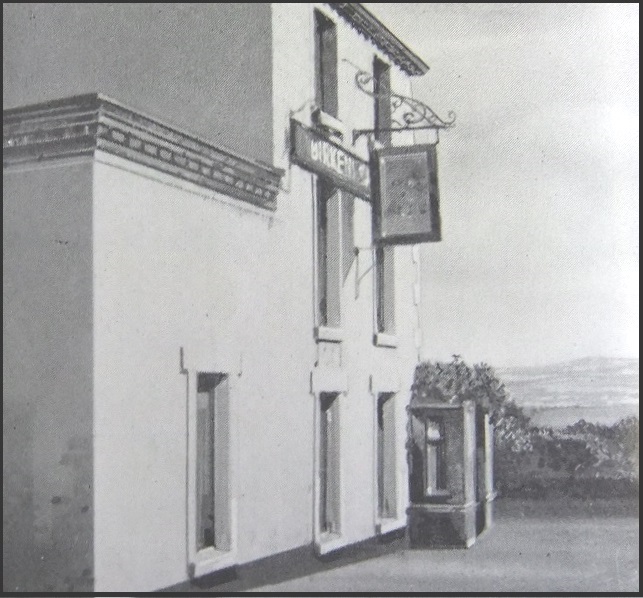