The photo below is of my grandparent’s wedding in 1904 and it was taken outside Neston South station where my great grandfather, Edwin Rook, was stationmaster in the early 1900s. I think he is the seated gent in the bowler hat. He was also a prominent member of the parish church choir and there is a plaque in his name in the choir stalls. There are various family tales of life in the station house, one being that my grandmother[Catherine]and her sister Lillian [Oxton – standing second from right] used to amuse themselves by spitting out of the bedroom window onto the bowler hats of the city gents on the platform heading for work in Liverpool! My grandmother never admitted to this as she was latterly a teacher in the Burton Road school until the 1930s and didn’t want her reputation to suffer. Other branches of the family still live in the area and it is worth mentioning that one of my Aunt Lill’s daughters was the ‘Dene’ in Salon Dene. I’m the only member of my branch of the family left living in Neston, or rather returned to live ten years ago My grandfather, Will Llewellyn, was a joiner with Albert Fleming builders whose yard was situated at the end of Station Road where the old persons housing now sits.

My mother got hold of her mother’s birth certificate and saw that she was born in a place called Grange Court in Gloucestershire. She thought this must be some grand house and was therefore descended from gentry. Now Edwin R worked for the Great Western Railway, and that was probably why he was promoted to the job at Neston station and was therefore not from aristocratic stock. Having thought about it for a while I remembered that Grange Court is a railway junction near Gloucester and therefore my gran was most probably born in a humble tied railway cottage at that location! 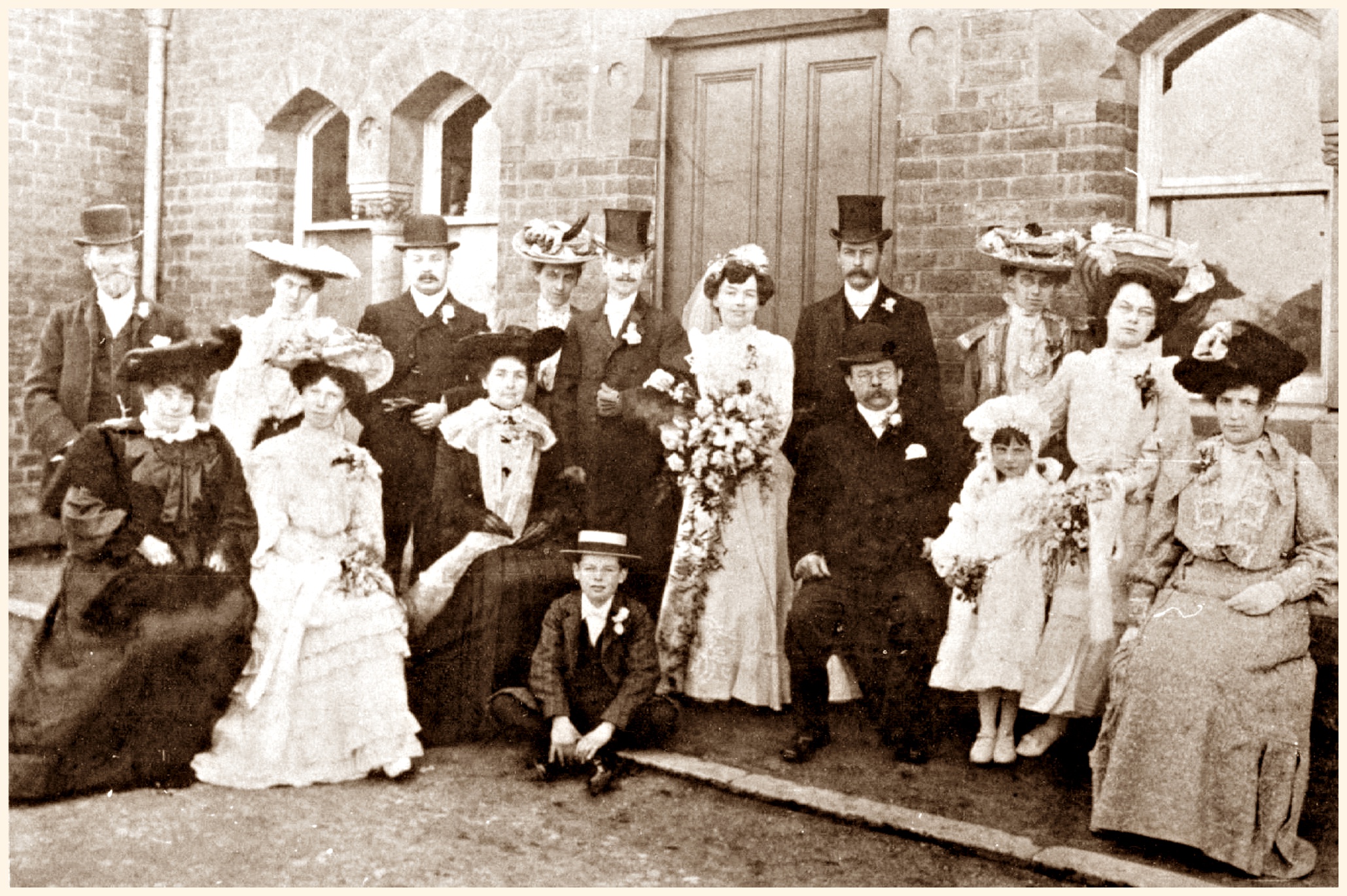 Edwin Rooke was born in Ross, Herefordshire in 1855. He evidently considered a career as a teacher at one point and in 1871 he was a pupil teacher at a local school. When he married in 1877 he was employed as railway ticket clerk in Tenbury in Worcestershire.  His wife was Katherine Elizabeth Rocke was the daughter of a railway signalman.  In the mide 1880s he was promoted to the position of stationmaster at Neston South station.

Edwin was a member of the church choir and also participated in many local entertainments, including one November 1899 in aid of the Little Neston Football Club which was held in the Ness Holt Schoolroom.

On Friday evening a successful entertainment on behalf of the Funds of the Little Neston Football Club was given in the Ness Holt Schoolroom by Mr. Cramer-Roberts, jun., and Mr. E. Rooke. The latter gentleman presided over a good audience, and, assisted by his daughters, gave some capital songs and duets during the evening. Mr. Cramer-Roberts gave a phonograph exhibition, and also a capital series of lantern views, from photos taken chiefly by himself. Types of the British Army were received with much applause, the audience joining heartily in singing “Rule Britannia,” and a very mixed reception greeted the appearance on the screen of Uncle Paul Kruger. The local views, shewing picturesque bits of Neston, Burton, Parkgate, &c, were greatly admired. The Misses Rooke played the accompaniments, and the customary votes of thanks were passed at the close.

Edwin’s daughter, Catherine Mabel Rooke (1881 – 1965) was born in Tetbury, Worcestershire in 1881. She successfully passed the pupil teacher examinations and finally the Queens Scholarship examination in 1900. She served her apprenticeship at Neston before taking a position as assistant schoolmistress in Atherton, Lancashire. She left Atherton to work in West Ham in London in May 1902 and the presentation from the staff and students of Atherton National School was reported in Neston.

Miss C. M. Rooke, daughter of Mr. Rooke, stationmaster, Neston, was on Tuesday the recipient of several presentations at the National School, Atherton, Lancashire. Miss Rooke served her apprenticeship at the National Schools, Neston, and secured a position at Atherton, where she had been for two and a half years. She has now obtained a post under the West Ham (London) School Board, and will commence her new duties on Monday. Miss Rooke was presented with a drawing-room clock, with candlesticks to match; a blouse watch by the scholars; a picture by the headmistress; a table centre and cushion cover by the assistant teachers; vases and photo frames by the pupil teachers; two gold charms by two little scholars; a teapot by Mrs. Brown; and a hall brush stand and salt cellars by Mrs. and Miss Evans. The Rev. Mr. Potter, curate, expressed his regret at the severance of Miss Rooke’s connection with the schools and also at the loss of her valuable assistance in the choir. He wished her every success in her new appointment.

In August 1904 Catherine married Arthur Willink Llewellyn, a joiner, of Ross in Herefordshire. Before their marriage he was lodging in West Kirby with stonemason, Benjamin Collins and his family. The family were guests at the wedding and their young daughter, May, was one of the bridesmaids.

Edwin’s youngest son, William Ernest Rooke (1892 – 1972 ) worked as a coal agent after leaving school. When war started in 1914 he enlisted and fought at Gallipoli, escaping serious injury until March 1917 when he was severely wounded in the right arm. The local newspapers reported his injury and gave some details about him and his army career.

On Sunday week the parents of Pte. W. E. Rooke received a cheering letter from their son, stating the  he was in the pink but that the cold weather was very trying in the trenches. On the following Saturday, however, came the news from a hospital in France that Pte. Rooke was located there, suffering from wounds in the right shoulder and arm. This sad news was confirmed by Captain Towse, of the Gordon Highlanders, by letter same post.

… He is a keen footballer and played for Institute, and was the chief factor in winning gold medals for the team a few seasons ago. Pte. Rooke has seen much fighting, having gone through the Gallipoli campaign, where he had some miraculous escapes, and was ultimately slightly wounded and contracted dysentery twice. Afterwards he was sent to Malta and then to a hospital in England, and due course sent out to France attached the 10th Battalion Cheshires last December.

Pte Rooke. is a true patriot, having responded to Lord Kitchener’s appeal for men August, 1914..

His condition was considered serious and his parents undertook the difficult journey to France to be with him.

PTE. W. E. ROOKE. With reference to the account, given in these columns a fortnight ago respecting the wounding of Pte. Rooke, a subsequent wire summoned the parents to France, as he was in a critical condition. Various rumours got afloat during the parent’s absence in France in consequence of the difficulty of getting news through, but it is pleasing to report that on arrival at the hospital a change tor the best had taken place in the patient’s condition, although he was very ill. He began to make rapid progress, and the latest and best news is that Pte. Rooke has arrived at a hospital at Ingham (England). His many friends will be pleased to hear this cheering news, and hope for a speedy recovery

William recovered well although he did need a number of operations on his return. He worked for many years as a postman and died in 1972 at the age of 80

Edwin’s health was failing and died in 1918.