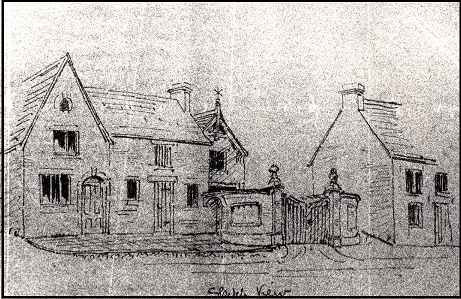 In earlier centuries Neston was well-known for its breweries, and four such establishments flourished within the town centre at the same time in the late 18th Century, with perhaps the sweet smell of brewing often permeating the Neston air.

One of the brewery sites was in Liverpool Road, where the Malt Shovel and the former ‘Top School’, now residential, stand. In 1790, brewery property in that area was owned by Margery Whittle, a wealthy single woman, whose parents’ initials are on the newsagent’s building on the Cross. Her father and brother had been prominent brewers in Neston. On that land in the 1870s was the Malt Shovel beer-house, malt kilns, drying kilns, outhouses, and also the school which had been built on brewery land in 1859.

A newsworthy event happened on the morning of 12th July 1884 when a bolt of lightening struck the Malt Shovel, leaving a gaping hole in the roof several feet wide. A tremendous clap of thunder had the patrons quaking.

Below – planned alterations for 1884 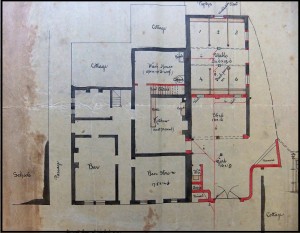 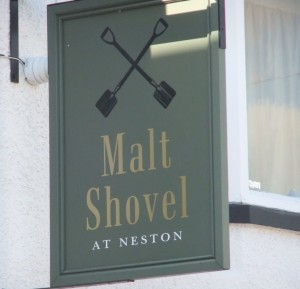 Two months previously the landlord and wife, Joseph and Matilda Waring, had been in court accused of being drunk in charge of licensed premises. They were seen through the kitchen window quarrelling and fighting by Sergeant O’ Donnell, and a man was trying to separate them. Two other police officers backed up the Sergeant’s story, but two customers swore the couple were quite sober. The Bench formed the opinion that the police may have been mistaken and dismissed the case. Perhaps the lightening strike was divine retribution.

In that same eventful year, brewers Gatehouse and Yates, later to become Yates Castle Brewery, owners of the Malt, carried out major alterations, building a new yard and stables with a gate onto Liverpool Road. Unfortunately the wall of the yard projected 10 feet onto the pavement so permission to build was refused.

Fights amongst the clientele of Neston’s hostelries were no rare thing, though the Malt was not the worst place for trouble. William McDonnell, the Malt licensee, was injured when he intervened in a big fight in Liverpool Road in 1889. Patrick Ryan had head-butted a constable, and was joined in the fracas by his wife, mother and three other men; McDonnell tried to help but was attacked by the women and left bleeding; it wasn’t easy being a landlord in those days.

The landlady in 1893 had a shock when she opened a telegram announcing “Licence refused; house not needed”; this in fact was someone’s idea of a joke, at a time when there was a lot of pressure to shut down many public houses.

Two cottages adjoined the back of the pub, known unsurprisingly as Malt Shovel Cottages; by the 1930s they were in a bad state, verminous, with damp walls, a standpipe in the yard, no kitchen sink, the floors two feet below ground level and a dilapidated privy. A family of seven lived in one, with two bedrooms, one of which was 5 feet by 6 feet 8 inches. Like many Neston houses they were condemned and closing orders issued.

Above Left – the Malt as it is now, and its sign… the Malt Shovel at Neston as opposed to the one at …..?