Sometime in the late 1940s/early 1950s two local men decided to try and find something to occupy the young lads in the Colliery area of Neston, which was remote from the main activities for recreation

At the Marshlands Road end of New Street was a derelict Chapel they decided to try and form a Boys Youth Club in the derelict buildings. They were George Wellings, a local painter and decorator, and Eric Hanley, the local milkman. They let it be known what they were doing and asked the local lads who would benefit from the new Club to come along and revive the buildings by painting, plastering and other building trade activities, without pay, but with the promise of free membership once the building was made habitable. A couple of names I remember where Mickey (?) Kerrigan and the Anyon brothers who lived in a house that was at the back of The Harp.Eventually the Club was the proud possessor of a table tennis table, a small snooker table and kitchen for making the inevitable “cuppa”. 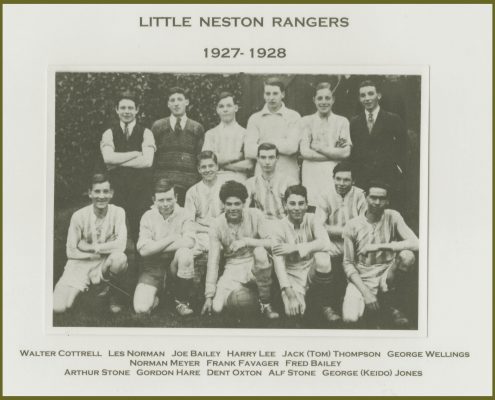 George and Eric had the idea that they should have a football team and it was taken up with great eagerness. A local farmer, Mr Griffiths of Ivy Farm in Little Neston, was persuaded to loan them the bottom end of his field which was alongside the larger of the old colliery pits and the side of the railway which came from Moorside, carrying coal to Moorside where the line joined the railway to Hooton and then onward to where ever the coal was wanted.

There was a tale that, during a game when the locals were losing by one goal, the ball “accidentally” finished up in the reservoir. After a bit of a search a punt was found and an intrepid spectator was persuaded to get into the boat and retrieve the ball. This gave the tiring defence of the Boys Club team a few moments to recover their energy and claim a draw in the final moments. Coincidentally this happened so regularly that eventually a boat was moored on the “Ressie” for each game, just in case it was needed.

The marches of time meant the boys became young men so the Club’s name was changed to Marshlands Football Club and lasted a few years more under that name. There is no proof, but it could well have been, that some of the better players joined the main local team, NESTON NOMADS. They ultimately became a well-known team, but not always for their skill with a football.

I remember going to an away game at Moreton and, as was the regular practice, as the players finished getting changed they would go into the field and have a “kick in”. Almost always the goalkeeper, Moggie Lewis would be the first out. His nick name arose from his cat-like agility in leaping around to save shots from all angles. He sported long auburn hair which he controlled by wearing a ladies’ hair net and a flat cap. Not an act many other goalies needed to follow. He would run behind the goal and collect the shots that went wide and on one occasion a couple of local youths took the opportunity to offer him “encouragement” but with a touch of sarcasm about his hair. Well, having retrieved the ball he put it down on the white line, walked across to the young lad making the comments, grabbed him by the front of his coat, lifted him off the ground and explained that if he carried on offering his advice in the same way he would need the services of a local dentist!!! There were quite a few words used that I did not understand but suffice to say, the boy went to the halfway line and watched the game from there.
The Nomads were, at this time, playing in the Park at the rear of The Institute and this story took place on that pitch.

It was recorded somewhere in the local history that, in a very important game the referee awarded the visitors a penalty which was converted. This didn’t go down very well with the Neston players or their supporters. As the final whistle was about to blow, the Ref made for the halfway line near the door into the changing room area. The whistle blew as the Ref dashed indoors escaping by the proverbial skin of his teeth. Things quietened down and the visitors’ team and officials came out and got on their coach. The coach left to a chorus of rude words as the home supporters settled down to await the appearance of the Ref who they wished to have word with!!! After a long wait the local lads came out but there was still no sign of the Ref. A couple of the locals managed to get into the room where the Ref and changed but there was no sign of him. The visiting team had allowed him to swap clothes with the coach driver and he had escaped dressed in the driver’s long coat and flat cap.

Not very much longer after that I seem to remember that, due to further problems with disputes with the authorities, the team name was banned “sine die” which I was told meant “for life”. I have since heard that it’s use had been allowed again, but only at “boys’ level” of competition.