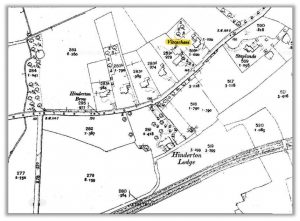 Approaching Neston from the A540 down Hinderton Road, on the right-hand side where the road narrows lies a substantial Edwardian family house bearing the name Vizcachani at its gate. An unusual name, given by the house’s first owner John Lionel Barber in 1907. 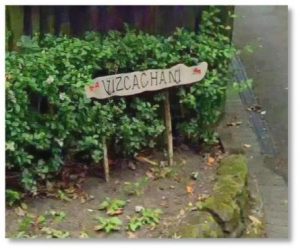 The house, large, double-fronted and pebble dashed (now painted white) was set back from the road in big gardens, lawns and flowerbeds to front and side, kitchen garden, orchard and soft fruits to the rear. The family occupied the ground and first floors, with nursery and servants’ rooms above. To the rear of the building were stables, coach-house and a courtyard, overlooked by the scullery and kitchen.

The Neston 1911 Census return for Vizcachani describes John Lionel Barber (head of the family) aged 41, as a South American Merchant, born in Leeds Yorkshire. Also resident were his wife Edith Mary or May aged 40, also born in Leeds; and their children Margarita aged 14, born in Chile (“ of British parentage “); Joyce aged 3, and Philip aged 1, both born in Neston.There were also three living-in servants. J.Lionel Barber probably settled in Neston because of its proximity to Liverpool, the major seaport in Britain dealing with cross-Atlantic trade.

Economic prosperity in Victorian Britain led to the growth of towns and cities where people came to earn a living in thriving coal, iron and steel industries. The overcrowding of such centres of population may have attracted many to travel further afield, to venture into new lands seeking opportunities to explore and exploit newly discovered resources.

Liverpool’s vital role as a hub in the network of trade, commerce, migration and culture connecting Britain with the rest of the world was in its heyday from the mid-1800s to the First World War. Thousands of people passed through the port on well-known trade routes, attracted by the prospect of fortunes to be made in newly expanding ventures around the world: gold in the Yukon and Australia; silver, copper, tin and other minerals in the High Andes of South America. Others followed, to build necessary roads, railways and public buildings; then came banking and insurance companies, providing an infrastructure for burgeoning economies, in countries where land and labour were cheap.

Vizcachani was named for one of the Barber family’s South American business ventures, a copper mine which became the largest in Bolivia. The name originally came from a small river, a tributary of the River Desaguadaro in the Andes Mountain range, some 80 miles from the Bolivian capital La Paz. The area was particularly rich in mineral deposits.

In 1913 the French Ministry of Commerce commissioned a survey of “Bolivia, its people and resources; its railways, mines, and rubber forests”–by Paul Walle, published 1914 by T Fisher Unwin, London. In Europe at least, the abundance of raw materials to be found in the remote Andes was now being realised. Page 245 of the survey, dealing with Bolivian Railways, reads: 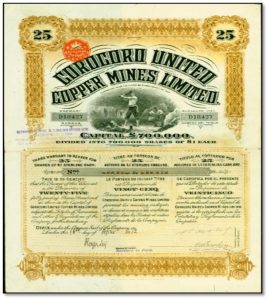 “A new syndicate has acquired the stock and equipment of the Amazon Steam Navigation Company……The new syndicate consists of Suarez Brothers of London and El Beni (a town near La Paz); the Booth Line of steamers, Liverpool; and Mr Percival Farquhar, representing the financial group of that name, who is the chief shareholder in the Madeira-Mamore Railways; and a number of other capitalists of Paris and London.”

Map showing Olinda next to Recife and Olinda township.

He worked briefly in a Leeds bank before going to Chile in 1889, subsequently moving to Bolivia and Peru. He was living in Corocoro in Bolivia at the time of his marriage to Edith Mary (May) Holroyd on 27th November 1893 in the city of Iquique in the English Church in the city of Iquique in Chile (From a newspaper cutting on the occasion of their Golden Wedding announcement, 27th November 1943, when they were living at Vizcachani in Neston)

In 1895 the couple were living Argentina and in the Argentine National Census for that year we find him living in Buenos Aires, as Juan Barber, aged 34, mecanico (Spanish = engineer) with his wife Maria aged 26, both born in “Inglaterra”.

They returned to England in 1898 when a list of incoming passengers to Liverpool in February records the arrival of John Lionel Barber, aged 28, Miner, with Mrs J. L. Barber his wife, and daughter Margarita, aged 1 month.

By July of that year they were living at Ilkley, Yorkshire, where John is described as a “Mining Engineer” on a birth certificate for his son, Harold Downwood Barber, born July 1898.

By 1901 they had moved to Neston and were living in the one of the villas in Hinderton Road.  By 1907 J.Lionel had purchased the new house, built in Neston in 1905, and had moved there with his small family. They had a son, John Maurice Barber, in 1903 but he died, aged 5, in 1908 in the same year that their daughter Joyce was born.  Another son, Philip Lionel Barber, was born two years later in 1910. The 1911 census states that John Lionel Barber and Edith M. Barber had been married for 17 years, had 6 children of whom 4 were still living.

He founded a firm in Liverpool which operated under various names finally becoming Lionel Barber, Sons and Co. He founded a copper and silver mining company, Lampa Mining Co. Ltd in Santa Lucia, Peru in 1906.  In addition to his business interests, he was vice- Consul for Bolivia from 1910 and acting Consul for Paraguay from 1936 until his death in 1947. He was also, at various periods, acting Consul- General for Bolivia from 1939. He was an elected member of the Council of the Liverpool Chamber of Commerce, and of its South American Trade Section.

The proximity of Vizcachani to the railway line at Neston South Station, (opened in 1866) which connected at Hooton to the Birkenhead line, made it much easier for him to make his many trips to the mines in South America via Liverpool.  Frequent journeys were made, criss-crossing the Atlantic sometimes several times a year, including: 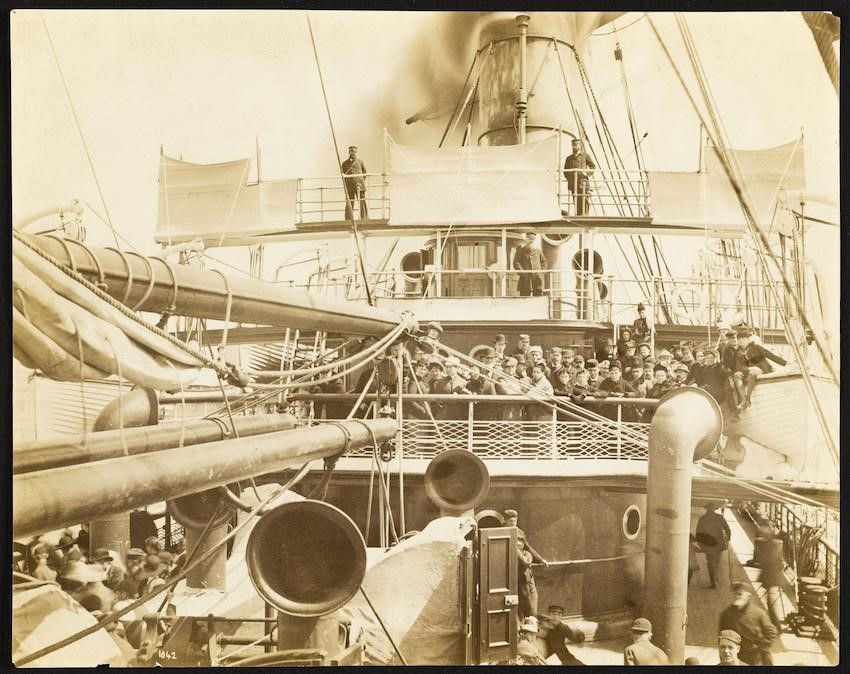 The family business also included two of his younger brothers, who married and settled permanently in South America while J. Lionel Barber looked after business matters at the British end of the operation although  making frequent visits back to the Bolivian mines.

His younger brother Edward Claude Percival Barber, (born Leeds 1872), at the time of Leeds Census in 1891 was still living with the family, aged 19 and working as an Analysist’s Assistant (possibly in metallurgy or minerals?). He appears to have followed JLB to South America and we find him in 1898 December, as Edward Barber, aged 25, “buyer”, travelling from New York to Liverpool, on SS “Cymric”.

He was followed by younger brother Reginald Dykes Barber. Born in Leeds in 1873, he is described on the 1891 Leeds Census as aged 18, and working as a bank clerk.

Like Edward, he followed his brother to South America and appears on several passenger lists:

In August 1925 Reginald died at his home in Arica, Chile, leaving his assets to his widow Mercedes Lopez Barber (will proved 1927 in London). Administration was given to JLB, his older brother.

In August 1930 Edward too died, in Arequipa, Peru, and probate was granted in 1932 to his widow Lastenia Palza de Barber.

J. Lionel’s son, Harold Downward Barber (1898-1940) fought in the First World War, enlisting in the Royal Field Artillery at the age of 18. He served in France where he was twice wounded and was awarded the Military Cross and the French Croix Militaire for gallantry. He worked in his father’s business in Liverpool before going to Chile where he was a Lloyds agent and partner in the firm Barber, Dear and Company, South American merchants. He died in Arica, Chile, aged 42, in 1940, leaving a wife and four children.

His wife, Edith May, remained at Vizcachani until her death in 1957.

After her mother’s death Joyce lived alone in the house for some years before the upper floors were rented to a suitable tenant while she continued to live on the ground floor. In 1965 she was awarded an M.B.E. She was Secretary and Housing Manager for Liverpool Improved Houses Ltd from its formation in 1928. She took a keen and active interest in the Guide movement and was a county commissioner for Cheshire. Joyce died in May 1999, aged 91.

My interest in Vizcachani and the Barber family came about after many years’ friendship with Joyce (Miss Barber) who had been my Guide Captain in 1950s Neston.. As Guides we spent much time at the house, sleeping overnight in the stable loft or under canvas in the old orchard, using the gardens for various Guide competitions and visits from other Guide troops in the area. We had heard some tales of her father’s adventures in South America and knew of her extended family there. In 1970/80s she made a trip to visit them and was made extremely welcome by these distant cousins. Some time later one of the girls came to stay with her while studying in England.

In recent years one of my sons moved to Recife in NE Brazil, where he discovered the old English Cemetery, containing hundreds of graves of people from all parts of the UK who had lived, worked and died in that part of South America, mostly between 1850 and the Second World War.

Strong links between the Port of Liverpool and South America were evident in some of the gravestone inscriptions, and there remain many connections in the Liverpool area, the house Vizcachani being one of them. Successful ventures often resulted in men returning to Britain wealthy enough to build or buy large properties for themselves and their families. Several large houses around the Sefton Park area of Liverpool, and further out from the city, were named after places in Spain, Portugal, or South America which had some particular memory or connection with the families dwelling there. 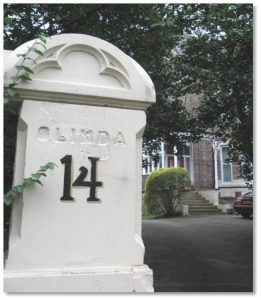 For example, the large house at No.14 Aigburth Drive still has the name Olinda carved into its gatepost. Olinda was one of the earliest Portuguese/Dutch settlements on the North-East coast of Brazil, an important port of entry into South America.

Valencia Road (L15), and the former Valencia House (now demolished), together with Belem Towers (also now demolished but its gatepost remains at the entrance to the land), were named after Valencia in Spain, and Belem after a town in Portugal and also in NE Brazil, near the Amazon Basin.

In Liverpool a group has been set up to investigate more of these links between South American, Spanish and Portuguese travellers of the 19th and 20th Centuries, and the Port which ties them all together. This has been set up in the University of Warwick Hispanic Studies Department by Doctor Kirsty Hooper.

More information can be found at