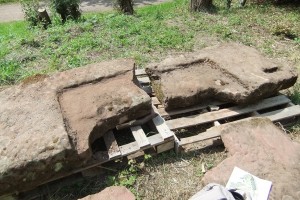 Just before the bends on Leighton Road is a group of fields (SJ292791) that bore the name ‘Headless Cross’ by 1581.  What this name signifies is unknown, but the fields in question are very near to the boundary between the townships of Great Neston and Leighton, and that may be relevant, indicating a significant position of some sort of wayside cross.

In a nearby field which was by 1820 part of the parkland garden of Ashfield Hall, the house built by Joseph Hayes Lyon (article coming up when we have time), were discovered some interesting pieces of  worked sandstone. John Evans and Peter France, amateur archaeologists, found these in 1991, covering a Victorian cess-pit. They appeared to be parts of two separate features, with a square hollow recess, and may possibly have been part of  some ‘Headless Cross’.  But many questions are presented – why at that site?, why headless?, why two which do not fit together?

Some articles have been written (see below) but none can give an answer of course, and it is doubtful that proof will be forthcoming, but speculation is interesting.  The stones are in the care of Ness Gardens and are currently being positioned as part of a new feature.

Details can be read in these publications:

Cheshire Sites and Monuments Record no. 2314

Cheshire Past, an annual review of archaeology in Cheshire, Cheshire County Council, 1994