Neston in WW1, just before Christmas 1917

There was still no major breakthrough in the war in Europe. A single day’s allied success at Cambrai on the Western Front in France, late November (first major use of British tanks) did not last, many of the tanks broke down and the Germans soon retaliated in force. Things were faring better in the Middle East with Jersusalem taken from the Turks, and that provided a major boost for British morale.

The last weekend in November saw some rough weather in the neighbourhood, with trees, chimneys, roofs and even shop windows being damaged. Some of the Parkgate fishermen’s boats were sunk, though they were recovered once the tide receded. Tides were in a low phase so there were no impressive scenes. The following weekend threw thunder, lightning and huge hailstones at the area, and thick snow covered the Welsh hills for several days.

The high price of coal was making life difficult at this time, as were national food shortages, and a Food Economy Committee was formed with Joseph Pemberton as Chairman, (he was also Chairman of the Council). The town was not agreed on how to handle food economy, and ‘voluntary rationing’ was called for by the Government, but by February 1918 rationing was introduced nationally.

Notices were issued to allotment holders from Neston Council’s clerk that seed potatoes must be ordered in quantities of 1 cwt and shared out. Poultry was expensive so Christmas dinners were expected to be sparse. An article in the Chester Chronicle headlined ‘The Food Crisis’ said that everyone must eat one fifth less food – but then reveals itself as a Bovril advertisement with “The addition of a small teaspoonful of Bovril to the diet as a peptogenic leads to more thorough digestion and assimilation and this saves food”

Some minor distraction was provided by the almost daily visits by aeroplanes, and one landed in Scott’s field in Little Neston on the first Saturday in December; there was no school of course so children rushed with some excitement to see the machine. Older residents were treated to an explanation of the workings of it by the pilot before it rose amidst applause to fly home – perhaps back to Hooton which had just opened as an aerodrome for the Royal Flying Corps. 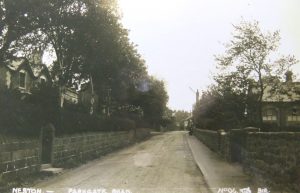 On Mon 9th December another ambulance train arrived in Chester, and the injured were distributed amongst several local hospitals. Chester War Hospital had 49, Parkgate 4, and Neston 12 (in the Institute). Several patients were troops from the fighting in Palestine, and were delighted to hear the news of the fall of Jerusalem. On Wednesday an entertainment was provided for the troops at the expense of William Whineray of Leighton Court, a man who had done a lot for the war effort and the town.

Private Harry Hough, Royal Engineers, had written home from Palestine, he’d had four months in hospital, rejoined his unit, then had a hellish two weeks which were nearly as bad as the awful days at Suvla Bay, Gallipoli, then two weeks marching up to 16 miles a day over hills and bad roads, frightfully hot all day, and ‘proper English weather’ at night, carrying a heavy pack, a gas-mask and one blanket to share between two of them. Food was biscuits and bully beef, with only a quart of water a day, They were the first dismounted troops to enter Beersheba, which didn’t impress Harry, only being ‘about the size of Ness.’ He noted that the area was populated with Bedouins wearing the same garment as the pictures of Our Lord in the books at home. Christmas dinner might be in Jerusalem if they makd it there. Harry later served on Neston Council and ran a decorators business on the Cross.

Joseph Pemberton, chairman of the Council, was father of five serving sons, the youngest of whom at just 20 years-old received the Distinguished Service Order this month. News also came through that L Cpl John Anyon had gained the Distinguished Conduct Medal for conspicuous bravery during an enemy counter attack. The Cheshire Observer points out that John’s many football friends will remember his success as a defender during the opponents’ attack on the football field, a skill now proved in a ‘nobler field’. 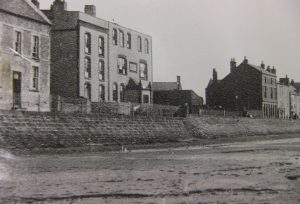 The Red Cross hospital in Parkgate.

Neston Petty Sessions dealt with the usual list of petty misdemeanours , George Kendrick charged with the heinous crime of travelling by train between Parkgate and Neston without a ticket – twice. He had a cheap workman’s weekly ticket from Neston to Hooton, but did not offer the 1 ½ d excess fare. The defendant pointed out that the cheap weekly fare wasn’t available from Parkgate and he committed the offence to save walking up to Neston. The bench considered that the facilities offered by the London and North Western and Great Western Joint Railway (where Wirral Way now runs) were being abused more and more, and called for ‘substantial punishment’ – 15s fine for each offence.

The usual list of insufficient lights on motor cars or carts, dogs without collars, a woman using petrol in contravention of the Motor Spirit Restriction Order to drive to Liverpool, and a lad from the Akbar Reformatory Institution in Heswall breaking and entering, and five lads from Wallasey who had been thieving at Thurstaston had three or four strokes of the birch.

And so yet another Christmas loomed, and the War STILL wasn’t over….