Coal preparation at the Wirral Colliery, Little Neston, in 1896

The following article was first published in the Burton and Neston History Society Bulletin, No. 18, of 2002/03.

Whilst it is, by its nature, focussed on one small facet of the last decades of coal mining in Little Neston, the article has much of interest to the general reader who is interested in learning a little more about a ‘lost’ part of our history and a local industry which played a dominant role in our town for over 150 years.

The article is reproduced in its entirety and without amendment from its first publication.

On the 19th February 1896 an important event occurred in the history of commercial coal mining in the Neston area when James Platt, then colliery manager, delivered a paper to the Federated Institution of Mining Engineers at their General Meeting in Firth College (later to become the University), Sheffield. Although commercial coalmining in Wirral had commenced before 1760, Platt’s presentation in 1896 provides the first detailed account of the process of coal preparation at the pithead and demonstrated how – albeit briefly – the Wirral Colliery was at the ‘leading edge’ of coal technology.

In the following account the italicised sections are direct quotations from James Platt’s paper.

The recent background
Ten years before Platt read his paper in Sheffield the Wirral Colliery Company Limited had purchased, for £7 750, the freehold colliery property and assets of the recently-liquidated Neston Colliery Company Limited. Located on the land and foreshore adjacent to the western extremity of Colliery Lane (now Marshlands Road) the colliery, extending over 25 acres and with an invested capital of £20 000, appeared to have a secure future. 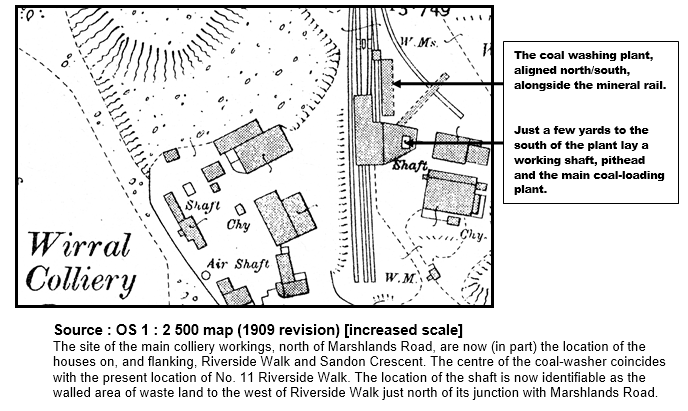 Although recently there had been some decrease in national coal output [from a record level of 1633/4 m. tons in 1883 to 157½ m. tons in 1886] rising regional demand had resulted initially in the re-opening of the nearby Point of Ayr Collieries in March 1885 where ‘..work was commenced with an energy that gave impetus to the trade of the district’ and, in February 1887, the sinking of a new shaft on land reclaimed from the sea to the east of the Point.

In 1881 James Platt was ‘underlooker’ (ie undermanager) in a colliery near Skelmersdale on the western margin of the Lancashire Coalfield but, by 1889, he had moved with his wife and nine children to Neston and assumed the responsibility of manager of the Wirral Colliery. Under Platt’s guidance the colliery appeared to prosper; the pit-head price of coal had risen to 8s 2d per ton by 1890, a 58% increase from its price four years earlier, and by 1891 it was employing 153 workers to raise around 100 000 tons of coal from the 5 feet (Badger Coal] and the deeper 7 feet seams under the Dee Estuary. However, as in earlier times, the financial viability of the Little Neston colliery was tested at times of recession within the industry – around 1895 the pit-head price of coal at Little Neston had fallen to 6s 5d per ton and the wages of the colliers had been reduced by 15%.

It is tempting to suggest that the Wirral Colliery was productively uneconomic, yet the figures for the period 1892/96, when Wirral produced 15% of Cheshire’s coal output from just 11% of those employed county-wide within the industry, appears not to sustain this supposition. Nevertheless Wirral, as other small coal-producing districts, would certainly have found it difficult to compete with the better-quality coal being sold from the larger coalfields where, since the 1860s, some very large coal-producers had emerged by amalgamation. Unlike, for example, the Wigan district – where the Wigan Coal & Iron Company had, by the 1880s, a capitalisation of over £2 million, a workforce exceeding 10 000 and an annual output of 2 million tons – the Wirral enterprise remained small and would have been unable to benefit from the economies of scale enjoyed by larger collieries in Flintshire and Lancashire.

Economically, however, the most important factors militating against the Wirral Colliery were the absence of an immediate large-scale industrial market and the high costs of coal transport to the major coal-using, but distant, markets. The sea export of coal from Neston to Wales, Ireland and beyond appears to have ceased in the 1850s but, more especially, the growth of coal-demanding heavy manufacturing industries characteristic of the other northern coalfields during the later part of the 19th century, was not reflected in Wirral. The absence of significant, accessible, markets for the colliery must have provided little stimulus.

It was against this background that, probably in 1895, the management of the Wirral Colliery recognised the need to invest in modern surface machinery. In radically improving the quality of coal sold from the pithead, this investment would enhance the demand for coal from Wirral.

Platt’s presentation and an outline of coal-preparation

James Platt opened his paper of 1896 by succinctly establishing the rationale of the decision to purchase revolutionary surface equipment for the Wirral Colliery:
‘The necessity of separating dirt from coal is being forced upon colliery-owners more urgently as competition becomes keener, and as the best seams of coal become worked out or cannot supply the demand, the inferior and dirtier seams must supply the coal for the market.
When the matter is fairly and impartially considered, it does not appear rational to expect consumers to pay for dirt when they buy fuel. In addition to this, it seems wasteful to pay the carriage on dirt, and this is a considerable item when we consider that a large bulk of the slack-coal sold for manufacturing purposes contains from 10 to 25 per cent. of free dirt, i.e., dirt which is free from the coal, and consequently ought not to be mixed with it’

In the first half of the 19th century, when the demand was for large and strong pieces of coal and ‘small coal’ had little market value, most collieries worked only the thickest and best seams. Although there is no direct evidence of the practice at Neston, it was common elsewhere for colliers to riddle the coal underground to remove much of the ‘dirt’ and slack (coal fragments less than about one inch in diameter), this material then being packed into the old workings rather than be raised to the surface. 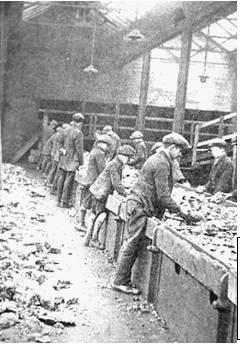 The hand-picking of coal from a picking-belt, Murton Colliery, Yorkshire [c1900]
Source : ‘The Preparation of Coal for the Market’,
Henry Louis, 1928

At the surface, further mechanical sorting of the coal could be made by passing it across inclined screens (rather like cattle grids) where the spacing of the wooden slats determined the size of the coal that fell through. At Neston, some of the small coal that found its way to the surface was used in the colliery’s steam engines and it is most probable that the brick- and lime-kilns (operational in 1872 but disused by 1909) associated with the colliery would have provided a proximal market. Hand-sorting (‘hand-picking’) of coal at the pithead using teams of boys and older men alongside picking-belts was introduced into the UK in about 1870 and soon became the normal method of grading coal and allowing the removal of the more obvious fragments of shale, sandstone and other non-coal material.

By the late 19th century earlier working had removed much of the more accessible and better-quality coal from the Neston workings and it is clear that Platt was echoing the sentiments of the Wirral Colliery’s shareholders when he said: ‘Those who have a dirty coal to sell, in these times of depression, can well understand how their difficulties would be lessened if they only had clean coal to dispose of.’

The recognition of the necessity for the colliery to provide ‘added value’ and provide a more marketable commodity, whilst recognising that this could increase the market cost of the product, was a
‘..problem [which] forced itself upon the management..’. .
The decision, made in 1894 or 1895, was that
‘..after looking for the most efficient and economical coal-washer in use, visiting and inspecting the most modern plants, and having samples of coal washed [the management] decided to erect an Elliott coal-washing plant, which, on account of its efficiency, simplicity, and small cost, was most suitable for their wants’.

In making the decision to purchase an Elliott coal-washer the management of Wirral Colliery was taking a risk. The concept of using water to clean coal on a continuous basis, thereby removing much of the ‘free dirt’ (the detrital impurities intermixed with, and often adhering to the surface of the coal fragments) was not new but, in Britain, was not common. Although metal ores had, since at least the mid-16th century, been concentrated using sieves and water troughs, the comparatively low value of coal, the much higher volumes involved and much higher product/waste ratio had not stimulated the introduction of comparative methods of preparation. 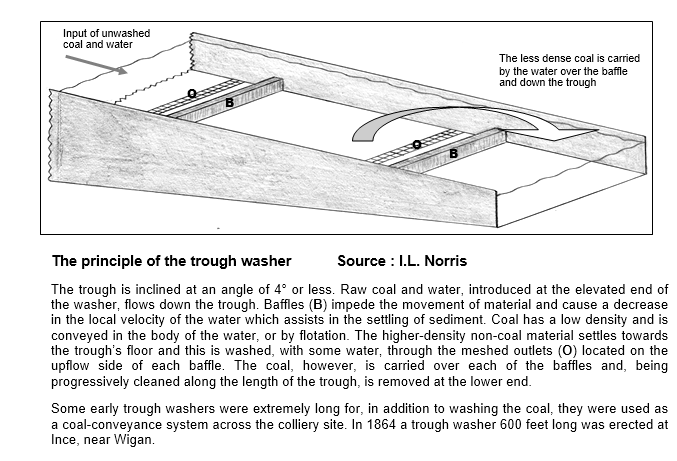 Some collieries had, by 1865, installed semi-mechanised trough washers in which mechanical devices stirred the coal and helped in the removal of the settled debris. Such washers, however, were unable to handle large volumes and their efficiency was questionable. The first record of the installation of an efficient, continuously-operating, coal-washing appliance in England (to wash slack for coking at a colliery at Newcastle-upon-Tyne) dates from 1849 and a similar (Bérard-type) washer had been erected for the Wigan Coal & Iron Company by 1868. Nevertheless, such appliances found little favour in England and it was not until the last quarter of the 19th century, when more mechanised coalmining techniques and the mining of thinner and ‘dirtier’ seams became widespread, that colliery owners paid serious attention to the sizing and cleaning of coal.

In 1894 (or, possibly, two years earlier) Elliott designed an automated trough washer which was, in a succession of refined versions, to set the standard for coal-washers for the next 35 years. In 1895, however, when the Wirral Colliery installed one of Elliott’s plants, the future success and national importance of this machinery was unenvisaged and the management – in being one of the first in the country to purchase this substantial equipment – must have been making an investment of faith.