The Hostels and HMS Mersey The original 1942 plan for the site, using both sides of Liverpool Road.

The original plan for the site that eventually became the Ringway development was hatched in 1942, and was intended to provide ‘temporary hostels’ for those made homeless by enemy bombing in Merseyside.

In April ’42 the Ministry of Works and Buildings, under Emergency Powers, took immediate possession of 22 acres of land north of Liverpool Road, ‘in the national interest’, whilst regretting, of course, any inconvenience this may have caused the farmer, William Croxton, based on Leighton Road; he would receive compensation anyway.

Building work by Government contractors commenced and Neston Council attempted to organise an extension to the water-main from the Chester/West Kirby road;  seven months later and the Ministry of Works finally agreed to the council’s offer to lay the main if the Ministry paid 50% of the cost.  There was of course,  a War on, and authorisation for steel supplies was a complex matter involving rationing periods covering only essential needs of the contract within the rationing period, and requirements for tinplate , ternplate (?) and blackplate(?) all had to be made separately.

Work on the water-main finally started on March 1st 1943, pipes having been delivered, though valves and fittings were not ready, but the supply to the hostels was finally turned on by April 14th. Because of the delay (of one year) in getting a water supply, the problem of the blitzed and  bombed-out families had lessened, and the section on the south-east section of Liverpool Road was put on hold, and was never built.  In fact the hostels were never used for their original purpose of housing Merseyside/Wirral bombed-out families.

Councillors and officials were invited to visit and inspect the finished site on July 11th 1943.

The homeless Merseyside families never materialised but refugees from Gibralter did, and they were the first people to use the camp.  Subsequently evacuee families from London and the South were there in August 1944, and it sounded somewhat like a holiday camp, with organised entertainment for the children including a sports day on that August Bank Holiday, and baby competitions and concerts. They lived in 4-bed rooms in blocks with bathrooms and toilets, and ate in the communal canteen. The complex was now being run by the National Service Hostel Corporation.

Some time later the Navy took over the site and it became HMS Mersey, with some connection with the Merchant Navy and then a ‘naval demobilisation centre’.

The camp was in the news in December 1945 when a woman was murdered in Wood Lane  by one of the sailors.  She was lodging in Moorfield Drive and had spent the evening in the Brewers Arms with a sailor and another girl, but that’s another story.

Five naval ratings from the camp who damaged street-lights in the town were named by their Captain in April 1946, two were  assistant bakers, one a scullion, an assistant steward and an assistant cook. This was presumably some leaving/demobilisation high-spirits as within a couple of days three of them  had been released under Class ‘A’ (ie subject to any emergency recall) and returned to their home towns, one drafted to another vessel and only one was still serving in HMS Mersey.

On August 31st ’46 the site was transferred from the  Admiralty to the Ministry of Health. Neston Council had already signified an interest in the site because of the serious housing situation in the district, and they were aware of the possibility of adapting what was already on the camp to make the huts fit for habitation for the many returning servicemen.

By around August 19th  the first of the Squatters had in fact moved in, amidst rumours of Poles possibly being housed there. The Council had a meeting with Squatters on 22nd August;  Chairman of the Council, F. Lewis made it clear that whilst they were in the difficult position of supporting the Squatters, (indeed Cllr Tilley had been invited to advise them on fuel provision), the Squatters were acting illegally and had in fact committed an act of piracy on one of H.M Ships.

A Q&A session followed, with discussion on cooking facilities, Yale locks, and rent charges (10/- a week) and formation of a small representative committee. Within a week there were problems with extensive damage being done to the unoccupied buildings and fuel was being stolen, mainly by outsiders. Around 200 people were living there by the end of the first week in September, and the seventy years of life on the Clayhill site for local people was just beginning, and indeed still continues.

As a post-script, Neston Council’s Clerk discovered in August 1953 that they had never received the 50% of the cost of laying the water-main ten years previously from the Ministry of Works. Correspondence ensued and the Ministry pointed out that all relevant records had been destroyed, but they finally contributed their £365 in June 1954!

And another post-script… whenever I look at these few years in our town’s history I am always impressed by the contribution the Neston Councillors and officers made to providing housing  and sorting a serious problem of homelessness and social distress. 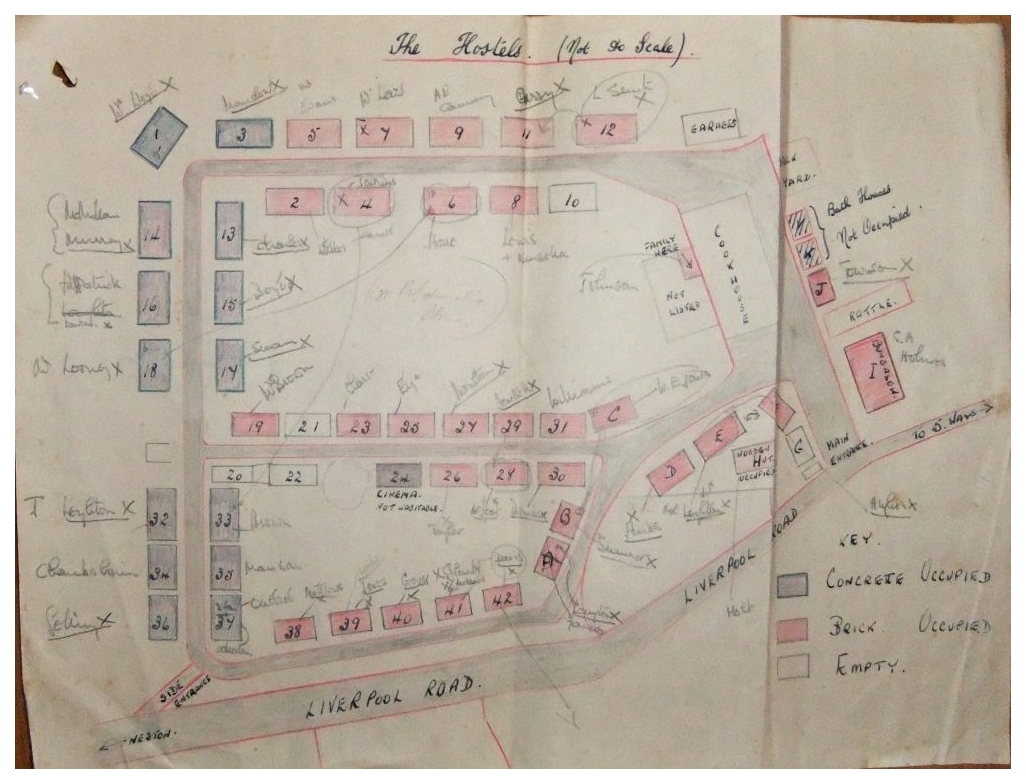