Memories of my Days on the Marshes

I was brought up in Little Neston in the ‘50s and ‘60s when the area was still quite rural. My father who hailed from Saughall near Chester, moved to Neston after serving in the army in WWII. He was brought up with the country pursuits of shooting and fishing and told me stories of his father who more often that not fed his family on rabbits and anything else he could acquire in the fields.

And so I followed my father and was encouraged to shoot and fish at the many pits and the old colliery reservoir that existed then. I remember my dad when he helped to form the Neston Angling Club, and the members used to fish in pits at the bottom of Lees Lane that they had permission to use from one of the local farmers. They also used to fish the old reservoir down by the Wirral Colliery slagheaps, which had some magnificent carp and tench in it. The club stocked Lees Lane pit with a lot of these fish when the reservoir was filled in for the land to be built on. I used to go with my father on these fishing trips but did not have the patience of the adults. I wanted to run around climbing trees and running up and down the slagheaps.

I acquired my first gun at the age of fourteen when licensing laws were not as strict as they are today. It was a single barrel Cooey 12 bore shot gun, and my father and I shot the fields and land around Little Neston which were accessible to us. Needless to say my father was very strict with me on the safety aspects of having a shotgun (given that I was only fourteen) and accompanied and supervised me on those trips. There was and still is quite a large group of characters in Neston who shared the same pursuits and when we meet up we reminisce about the old days when a good proportion of the community either fished or went shooting. 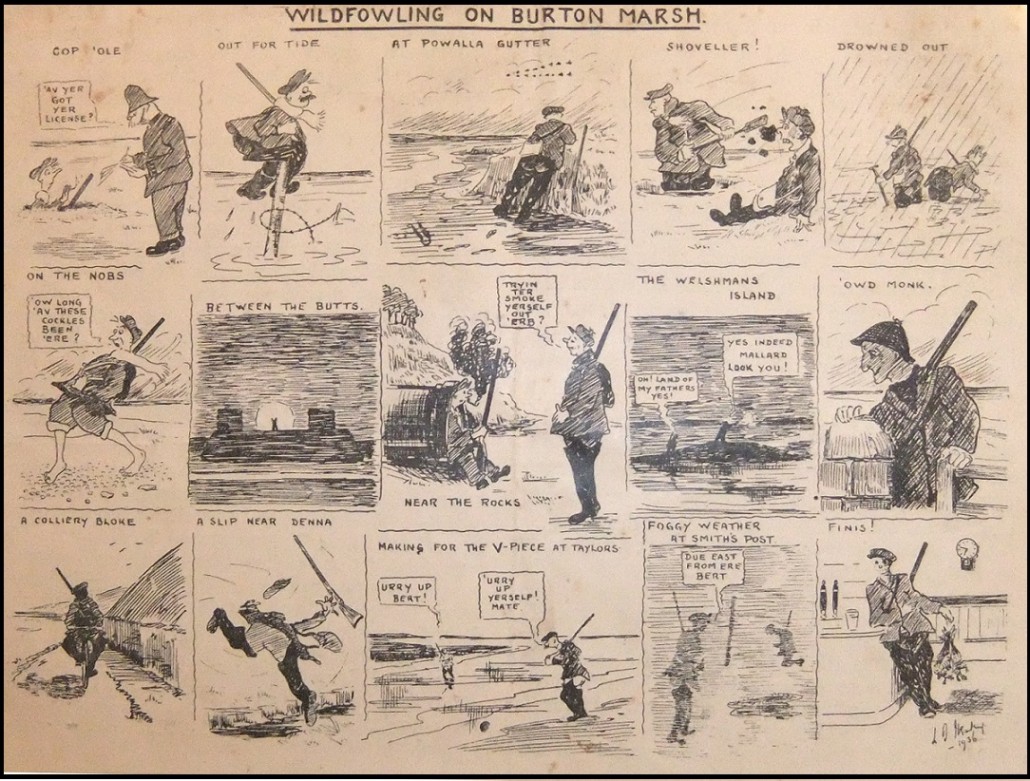 As I grew older I started to do a Saturday job at one of the local butchers in Little Neston where I could meet and chat with one of the local people who first introduced me to shooting the marsh. I had always regarded the Dee marshes with a sense of fascination  but also with trepidation after getting caught out by the tides when we made our many forays as kids unto the marshes to swim and play. It was a different place then, when it was clean, and golden sand stretched out from the lollipop gutter which was just off the shore at the bottom of the Colliery Lane. Many of us learned to swim down there; in the summer on Sunday afternoons, local people would take their family down there to have picnics and swim.

I gradually found and learned my way around the many gutters and gullies in the marsh during my late teens and struck up friendships with many of the local wildfowlers and learned the names that the locals gave to the various areas and places on the marsh, which I used to frequent during my twenties. Bad weather was a major factor as to when we went on the marshes because it made the wildfowl move around more which made it more likely that we would encounter it. Quite often we went on the marsh during very rough and windy weather to shoot on the tide and at those times I don’t mind admitting  that I felt quite nervous and anxious of the potential danger that we faced when were not sure how big the rough weather would make the tide, and a few times we had to make for higher ground called the Nobs to stand the tide out if we had left it too late to abort our forays.

I used to shoot on the tides and on the front with a friend who lived next-door-but-one to me, and very often when the wind was blowing he would give me a knock early in the morning and we would brave the elements out to the front and dig ourselves in very often before dawn for morning flight and wait for the tide to come rolling down the gutters and move the wildfowl. At one time we were called “the mast bank demons” for frequenting this place so often.

I have been very lucky to have experienced this tidal and front shooting during my time on the marsh because wildfowling is no longer allowed up there after the R.S.P.B. started to manage the marsh. I have seen many wonderful sights and been in some quite comical situations, falling in and getting wet when there was a lot of flooding left on the marsh after a big tide. I remember after one particular evening flight foray, it took us 2 ½ hours to get out of the back marsh because of the floods, getting wet up to the waist in the process. I have often been soaked and sat for hours with not a sight of any quarry, but it was worth it to be able to write down experiences like this in my sixties. Also a pint and a warm by the fire in the Harp made it seem all worthwhile especially when we could sit with other wildfowlers and tell our stories and tall tales.

I no longer go shooting or fishing but take great pleasure in seeing and observing the wildlife that still abounds in this area. My wife is also very interested in the wildlife and can identify different ducks and geese as well as I can now!