– and Little Neston remembered by me, Ann Jones, daughter of Edward (Marlow) and Amy Jones. 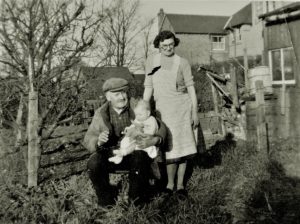 Me, with Mum and Dad

I’m so enjoying Neston Past, I wonder if I am in the unique position of being the daughter of a Little Neston miner born in 1889, at Number 3 New Street, and still in control of most of my faculties at 75.

My father was married three times, and I’m the surprising product of his third marriage – imagine the gossip, when he was 55.

My spinster Mother, Amy Young, was evacuated from Liverpool at the beginning of the war to Adsheads in Little Neston.

Dad was too old to serve in the Second World War but he did serve in the First World War. H came home from the First World War with the ability to drive, so when Neston Urban District Council got a dust bin truck, he became the driver, earning (I just found the council expenses from 1939 on the Nestonpast website) the handsome salary of 2 pounds 15shillings for driving the council motor lorry. (Did poor Tommy the horse out of a job I see!) It was the only truck and they covered a lot of territory: Ness, Burton, Hinderton etc.

We never had anything new at our house, all came from the wagon and was repaired by my Dad. He could fix anything – the bigger the challenge the better. After retirement that’s what he did, he’d fix anything for anyone, usually for nothing. A lot of his jobs came from the people he knew from the bin route, some from the wealthy houses in Burton and Hinderton Road, from the Parkgate fishermen and a lot of from local farms.

An early memory, when I was four years old, was going to see my dying grandmother in West Kirby where her daughter Aunt Julia was nursing her. A Parkgate fishing boat took us to West Kirby, and after the visit we took the steam train back to Neston. My first memory of terror was when that train arrived.

Later Dad got wheels and used to take me with him in his old Ford pick-up, with a wooden back painted green and red, called Lizzie. The carburetor had to be primed before it would start, and that was my job. He later upgraded to an old red clapped-out Austin from the Gas Board. When we went on a family outing, Mum sat up front and I sat in the back, all year round, sometimes wet and cold. He often hauled stuff in the back; once, a pig in a cage which urinated, and my friend Sue Lett and I spent the rest of the trip avoiding the moving puddle.

He called me his  ‘chicken’ as I followed him around all his haunts, him chatting with Mr. Bridson, Henry Norman, Mrs Ashbrook, the Mellor’s, Mr. Williams from Upper Raby Road, Stormy Mealor, Alf Mealor, the Petrol station on the Parkgate Front, Bibby’s Engineers, Bibby’s farm in Burton, Dicker Jones of Talbot Avenue, (who ran an illegal book on the Grand National and had a wooden leg), Bill Jones the builder, Mr. Whiteway carpenter on Cross Street, Mrs. Palfreyman from the Harp (which was fondly called “Pomps” at the time), Fred Jones from the bungalow on the Rocks (now gone but the garden trees and bushes are still there), Mr. Buglass at the sweet shop, Clough’s Farm and many more I can’t remember. Many I didn’t know as we were not of the same class, but he did odd jobs for them.

1950’s
One of the local farmers was having trouble keeping his livestock fenced in so Dad rigged up an electric fence. An old electric turntable/gramophone was the heart of it.As the turntable turned a sensor on the side touched a stationary sensor and a pulse of electricity went through the wire. Some of my friends were there, maybe Carol Wycherley, when he tested it. We held hands and he held the live wire, and we all got a pulse of electricity. He maintained it was good for your heart to get belt now and again. A man whose name escapes me designed a system for letting the gas out of home made wine while fermenting. It was two plastic bottles one smaller than the other. The neck was cut off the smaller bottle, the base cut out of the other (I think) then one was slid into the other and the base of one was drilled for a glass tube. There were quite a lot of them, so Dad set me up on the lathe, and I cut the necks and bases off, drilled the hole and assembled them. I got paid for it! my first job. Not sure if or how it worked but later I did see a booklet this man had published on wine making. Think he was from Heswall or out that way. One day the petrol mower from the Catholic Church was brought over as I wouldn’t start. So Dad said you know what to do, see if you can get it started. All I did was clean the plug, and off she went. It was a horizontal blade, unusual at the time. Unfortunately I had my foot under the cowling when it started. The blade took a chunk out of the top of my sock but didn’t cut me.

I learned a lot of history and local tales, wish I’d taken more notice or asked more questions, but I was just too young. I also learned to fix things, using a lathe at age of ten, and I could change a car tyre (not just the wheel) with tyre wrenches. I could braze – useless stuff for a girl of my generation. One day he lit an incendiary bomb to show me how it worked.  It was made of an aluminium type metal that burns hot and is difficult to extinguish. No big bangs. Just another day at our house. He probably got it on the bin round.

He worked at the water works up Lees Lane periodically when someone was on holiday. The local dump at that time was up Woodfall or Woeful Lane; they set fire to it periodically. It might have been an old marl pit. Not far from the water reservoir now I think about it…..

I have his 25 year retirement clock from NUDC.

He was the third generation of miners, although he himself didn’t go underground.  His father vowed that none of his sons would go underground, and as far as I know they didn’t. Swad and Dad had a small brickwork’s after the mine closed but fell out and never spoke again. Sooo Neston!

He was born in 1889, the son of a miner, Edward Jones, and his wife Julia. He lived with his family at 3, New Street. The first Edward Jones (Great Grandfather) appears to have come from Hawarden to the Colliery. Not sure when. There were 11 children in Dad’s generation, though three of them died. My Dad was the eldest son. The males were Ted (Marlow), Swad (Henry) (who lived in the in managers house at the bottom of Colliery Lane until he died, long after the pit disappeared), Mick, and Oliver.

Oliver, the youngest, was too young to enlist during the First World War, but the other three did, and amazingly met up in the desert and somewhere in the family was a photograph of them but it’s long since disappeared. My Dad was in the Cheshire’s, and then transferred to the Royal Engineers. We can’t find his army records; they were amongst those destroyed in by the bombing in London during the next war.

He talked very little of the war, apart from mentioning the bed bugs (much to my Mothers horror), and he swore when he got back that he would never leave home again and he didn’t, except to go on a NUDC bus trip to the Exhibition of Britain in the 50’s.

The only war story he told was that his job in the desert was keeping the water supply operating somewhere in Egypt. He worked for a wealthy man called Abu Kadra who offered Dad a 12 inch pile of gold and a job after the war if he would go back with his family and run the water system. Needless to say he didn’t go, but he did call our house Abukadra, which was on Burton Road across from Rose Gardens.

He worked on the engines of the Parkgate shrimp boats, and we often got shrimps and fish. The best. Visiting the families was fascinating, the women sitting around a large table covered with newspaper ‘shulling’ the shrimp with amazing speed and chatting. The pile of shells was twice the size of the shrimp. The shrimp were boiled in seawater on the boat as they caught them, ready for shulling at home.

I was born in 1945 on Burton Road at the bottom of Badger Bait or (Badger Butt) across from the new Rose Gardens. I grew up with the Ashbrook, Jones, Wycherley and Gabriel kids. Behind our house were the allotments which kept us well supplied with vegetables, probably through the war too. Mr. Bates from Gladstone or Olive Road was a good friend. Our house didn’t have a number, they all had names, ours was Abukadra. I see it has a number now.

Dad was married three times. His first wife was Kate(Kit) Byron, from Burton. They were married in 1912 and had three children.  A couple of years ago my niece Pauline showed me a grave in Burton churchyard where Edward Jones, my half-brother, was buried with his maternal, grandparents, the Byrons of Burton, at the age of 5 months. That was when I realized there was no Edward Jones in the next generation, the eldest son was Ronald. The baby was never mentioned to me. My half-sister was Hannah. 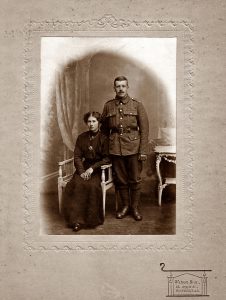 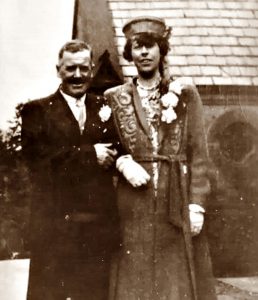 Learned many valuable lessons from Dad, some came in useful especially the two stroke plug issue as I had a snowmobile in the Yukon which I rode a kilometer on the frozen lake in winter to get to my car to go to town. Used a quad in the summer when the trail cleared of snow. Below is a picture taken from a neighbours house of the Suzuki quad the very last time it let me down and I had to walk. I left soon after. 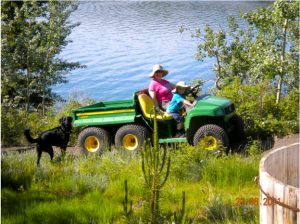