The Local Board held elections at the beginning of April, where, according to the Observer, more feeling had been excited than at any other Neston Local Board Election (ie twenty years of them). Dark dealings were suspected; a ratepayers’ meeting had been organised in the Town Hall by persons unknown, with the promise that all candidates would be there, but one candidate, John Churton (Chester solicitor) had been thousands of miles away, and Thomas Molyneux (Neston baker, another candidate) claimed he had not been invited, and turned up merely because he had seen the placard outside. It was sparsely attended and chaired by Mr Grylls from the navvy mission, where Neston Methodist Church now stands.

Gladstone Road. John Thompson was the builder and he was standing for election.

Some men had been going round illegally canvassing, a practice which had only occurred in the past two years since the cottagers had been allowed the vote. Colonel Lloyd, harness maker, (his rank was from the Volunteer Rifle Corps) was the returning officer, and voting papers had been fraudulently filled out in people’s homes while they were at work; for example Mrs McIver had been approached when her husband was at work in the colliery, and despite her objections, the form had been filled in for her husband, but he objected to two of the four candidates he had supposedly ticked and made an alteration, thereby spoiling his paper. This was a regular occurrence, and in another instance a man who could not read had brought his voting paper to the returning officer and asked who he had voted for – and one of his entered names was Thomas Molyneux the baker, whom he had no intention of choosing, but Dr Blunden had supposedly filled it in for him. There were other examples, and a public enquiry was being considered. Such was the ill-feeling and accusatory remarks at the last meeting of the retiring Board that no formal thanks were given to the chairman or committee chairmen.
The Board reported a high irrecoverable rate total in its end of year account because of empty colliery cottages and the former electric works which was also standing empty (later the laundry).
There was a lot of fuss about telephone poles that were being erected by the National Telephone Company, particularly by Hutton Wright of Leighton Hall Farm who thought the poles should be paid for and rated, and that he would strongly object to poles and wires in front of Leighton Hall. One Board member pointed out that if Neston persisted with this obstructive policy it might find itself in the position of some towns that had been left without a railway. 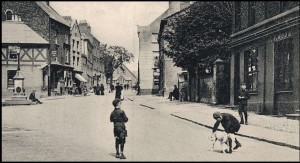 High Street, the old Navvy Mission Hall at the top of the road.

At the end of April a meeting was arranged to set up a Quoits Club, mainly consisting of Rev. Barrett’s men’s bible class; he became President and Treasurer, and a piece of land in Raby Road had already been taken (across the road from Aldi car-park). There was also a flourishing Bowling Club, President Captain Grundy (Volunteer Rifle Corps rank, Parkgate Road) was the President.
The Rev. Barrett organized a Church of England Temperance Society concert, well attended, in the Liverpool Road schoolrooms. The highlight of the evening was Rev Barrett’s rendition of “In Neston you know” to the tune of “Quite English you know”, the music itself lost in the mists of time, but a number of local topics and grievances were humorously touched on. (His wife, incidentally, was playing many a piano accompaniment twenty-five years later in the War).
More Neston controversy was aired at the end of April when a leaving presentation was made to Rev. Joseph Lyon, senior curate. The aged and infirm vicar Canon Gleadowe had for some mysterious reason given him and the junior curate notice, an action that had been met with some incredulity in the parish. A very distinguished party sat on the stage in the Town Hall – including Duncan Graham from the Lydiate, Dr Riddock the schoolmaster from Little Neston, Reginald Bushell of Hinderton Lodge, Rev. J Towert from the Presbyterian church, Colonel Lloyd, Captain Grundy, W. Jones, property auctioneer, T. Molyneux, baker, and Joseph Pemberton, chairman of the Local Board. Rev Gleadowe did not attend.Grateful speeches were given, and 130 sovereigns, with mentions of the Lyon family being ‘one of the oldest in the district’. They had been a wealthy brewing family in the town centre.
Even the annual Easter vestry meeting at the Parish Church was somewhat fraught, (Chairman, the vicar, Canon Gleadowe) with several regulars not attending , and one nominated sides-man declining to serve because of remarks by the vicar that more sides-men were needed because of the disgraceful behaviour of some young persons during services. 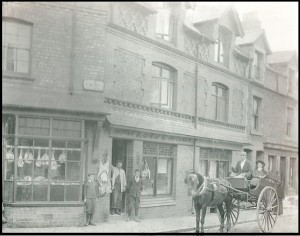 An exciting few minutes occurred at the end of Chester Road by “the ruins”. These were some notoriously derelict buildings where the accountant now stands. On a Monday evening early in May a large bullock was being driven into town from Chester by a boy called Newton, who was working for Thomas Swift, the butcher. Swift’s shop was where the late “Nat West” now stands. Seeing the bull was getting out of control, young Newton shouted a warning to the bystanders, most of whom scattered except for young Annie Birch who was seated on a wheelbarrow holding a baby. The bull charged and the baby was flung high in the air, and Annie was hurled to the ground, was again attacked and had her dress ripped by the bull’s horns. At this point Mr Swift’s dog (wearing the regulation muzzle) came to the rescue and kept the beast at bay until young Newton with some difficulty took control and ushered it to its destination to meet a rapid end. Amazingly neither Annie nor the baby were injured apart from a few scratches.