Romp and Stomp in the Town Hall Basement? No Chance, said the Council.

A popular music promoter from Wallasey, by the name of Les Dodd, was responsible for bringing the Silver Beetles to Neston in 1960. His company, Paramount Enterprises had in fact been running events in Neston for years, and in 1952 he was organising a series of Wednesday dances at the Institute, (Civic Hall) with a steady attendance of 90-100 for (according to Les Dodd) ‘a stylish and well organised dance, which brings nothing but credit to the hall’. However, the dances were not bringing a profit for Mr Dodd, so he was allowed a discounted rate.

Dances were a very popular form of entertainment at that time, but not without their problems, an example being the occasion of a Boys Brigade dance at the Institute in July 1953 when three drunks tried to gain admission at 11pm, and were refused. A few minutes later they appeared by the verandah with a ladder, broke the verandah doors, smashed five panes of glass and ruined the bowling green flower bed. The council Clerk consulted the Chief Constable’s office but was merely advised to admit NO-ONE after 10pm, and he would find there was no trouble ‘after the first few months’. Police would keep any eye on things, but stewards should be doing the work really, said the Chief Constable.

A quote from Cllr Reg Chrimes, 1950, referring to Morgans employees. Click to view.

Neston Council actually found that running dances themselves was a source of revenue, and in January 1955 the councillors set to and organised two municipal Saturday night dances featuring the Debonairs Orchestra, with the door staffed by Councillors Reg Chrimes, Grant and Macbradley, catering by Mrs Hough, and Harry McNally (who seemed to have been there for ever) as steward. The idea was to demonstrate, as indeed it did, to outside promoters that the dances could be a success. Five dances were actually run by the councillors, 620 people had attended and a good profit made to contribute to council revenue.

Trouble broke out at dances intermittently, and usually stemmed from people being allowed in late in the evening. In 1957 the Police Chief Superintendent again pointed out that conduct in the hall was the responsibility of the organisers.

In January ’57 an innovative idea caused some fierce objections from parts of the populace. A Chester Jazz club was wanting to hold jazz concerts on Sundays in the Institute. The Municipal Buildings Committee recommended refusal, but Cllr Reg Chrimes suggested Sunday afternoon concerts would not interfere with church attendance, and as people often listened to music on Sunday afternoons did it matter if it was highbrow or jazz? It was, he said no use bewailing the way young people behaved if we were going to deprive them of the kind of activities they wanted. (Councillor Chrimes could always be counted on to take a sensible view). 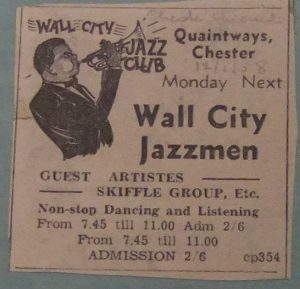 But Councillor Overton had no doubt that jazz ‘in certain forms’ might give offence, and there had, he claimed, been disturbances in some other places. Nearby local residents from Hinderton Road viewed the idea in a positive light, ‘It would be somewhere for boys to go’ said one, ‘instead of hanging around street corners or dirtying their Sunday bests playing football.’

We have no record of the comments of Rev T.O.C.East from the Parish Church; Rev. Kidd from the Presbyterian church (now URC) had no objections, but the representative of the Methodist churches objected strongly, as did Rev. Applebee from Emmanuel Hall (the building with the pillars near to the Library). Rev. Applebee considered it a desecration of the Lord’s Day, and a deprivation of the younger generation of the spiritual and moral example they needed. However, the Council remained supportive of the idea.

A series of dances was arranged by a Chester promoter for Thursday nights from March ‘57, and he requested that the Police make a constable available for each dance. The Chief Superintendent contacted the Clerk of Neston Council with some concern as there was obviously an anticipation of trouble, and he understood that this was a ‘modern rock and roll, skiffle group type of dance’, and he wondered if the dances should be allowed if disorder was possible.

Neston Police planned their annual dance for 4th November 1958, and found its usual hours of licensed bar could well be reduced by an hour to 11pm ‘as the result of certain behaviour at other dances’, though the organiser felt it hardly necessary to add that Neston Police had not had any trouble whatsoever at their dances. He therefore applied (with the permission of his Chief Superintendent, he made clear) for a licence from 8pm to midnight.

By early 1960 ‘Tombola’ sessions were hogging all the bookings and dance organisers were getting frustrated. Three sessions a week of Housey-Housey (an early form of Bingo surely?) were keeping the Institute busy – was this the same as ‘Tombola’?

No council records exist of the Silver Beetles event on June 2nd that year unfortunately, part of a six week run for Les Dodd and his Paramount Enterprises, but according to the Birkenhead News and Advertiser, the five-strong group had made a terrific impact on Merseyside, pulling in capacity houses. 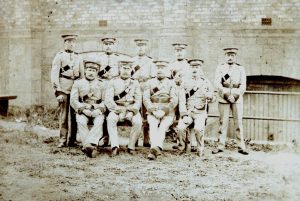 The Town Hall basement was the the home of the local Volunteer regiment late 19th century but has not really been useful since then.

Neston’s Beetle/Beatle appearances were limited to those few weeks in June and July 1960, but Les Dodd and his Paramount Enterprises still ran dances, and in November ’63 Les put an idea to Neston Council that he could run a club dance for local teenagers on Sunday nights in ‘the cellar under the Town Hall’.

The youngsters could ‘romp and stomp to their hearts delight without causing annoyance to anyone’, claimed Les in his application, and other nights could be considered if the Sundays were a success. Being a club meant that any undesirables could be kept out and the local police and Mr McNally would vouch for his good management.

This of course was the era of Liverpool’s Cavern Club, where the Beatles had just made a final appearance as their fame expanded. Did Les Dodd see our Town Hall basement as a similar venue, with its limited capacity and vaulted roof? Sadly the police were not happy with the idea, there were fears of people congregating outside, although the venue itself may be well managed, and of course there would have been a fair amount of noise. So Neston missed its one chance to flourish as a centre for ’60’s music and culture.

The promoter of the Beatles in Neston, and many other dances and events.