It was nine years before the Boer War, and twenty-four years before World War I and there was plenty to do in Neston, with the new Town Hall being well used.  There were however several occasions when tempers frayed amongst the  leading gentry…

On New Year’s Eve of 1889 (Tuesday night) Uvedale Corbett of Ashfield Hall gave a Ball for his tenants in the Town Hall, with supper served in the basement (the Drill Hall) by Mr Sutherland the landlord of the Golden Lion across the road. The brass band of the Neston Volunteer Corps entertained the guests.

After midnight services at the Presbyterian Church (URC) and the Mission Hall (where the Methodist Church now stands), there was the traditional gathering at the Cross, accompanied by the Mission Hall brass band. 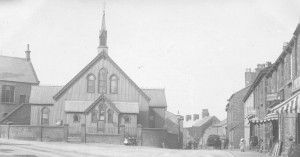 The Mission Hall, replaced by the Methodist Church 1907

The previous day the annual treat to the aged poor had been enjoyed in the Liverpool Road schoolrooms, financed by Mr and Mrs Churton (he was a Chester solicitor) from the Manor House down Moorside. Around sixty guests enjoyed the beefsteak pies, hot-pots, roast mutton, cakes and tea, again provided by Mr Sutherland, and were given a packet of tea to take home.

On New Year’s Day the Volunteers Corp’s rifle competition was held on the range at the Old Quay (on the shore by Old Quay House) for prizes given by local traders, ranging from casks of beer (Birkenhead Brewery) to cigars, ham, ducks, a bunloaf and six months free shaving. The following day the Town Hall was in use again, for their annual prize distribution. Reginald Bushell of Hinderton Lodge chaired the event, which had been initiated by his father, Christopher Bushell, and Duncan Graham of the Lydiate. Around one hundred of the Volunteers assembled in the Drill Hall and marched into the main hall where hot-pot and beef steak pies were again on the menu. Toasts and the national anthem preceded the prize-giving, and there were no women present. 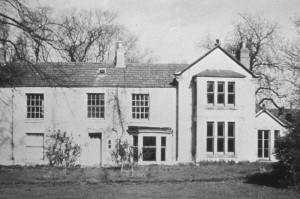 The Manor House, down Moorside Lane, home of the Churtons.

Mr Sutherland of the Golden Lion was kept busy yet again on Friday at the first annual ball of the Neston Lodge of the Ancient Shepherds (a male Friendly Society) in the Town Hall (which had been open for less than a year). About 170 attended, with dancing to the strains of a string band into the early hours.

But it had not been a jolly New Year for everyone, and a 17-year old from Eldon Terrace had stolen 1cwt of coal from the gasworks on Church Lane on New Year’s Eve. Just after 5am he took a large lump of coal and also filled a sack but he had been spotted by the son of the Manager who reported it to his father. The lump was produced in court and 10s penalty inflicted.

Mid-January saw the excitement of a Draught Contest at the Reading Room and Club, predecessor of the Library, held in the Town Hall. Thirty four members took part, and P. Maddox was victorious.

Mrs Jellicoe, confectioner of The Cross died at the end of January; she had been a member of Ladies Club for 46 years, and twenty society members carrying white staffs trimmed with black crepe led the funeral procession.

The monthly council meeting, chaired by Dr Russell of Vine House, was concerned that the Wirral Colliery Company was reluctant to repair the road by the colliery entrance, though this bit of road was only used by people robbing the stones and gravel from the shore. There were also complaints about the road in the centre of Little Neston, where someone had filled a hole with rubbish including tins and old mortar. This was followed by complaints from the Little Neston members that the township had been neglected,  and Mr Mealor mentioned the woeful state of Woefull (Woodfall) Lane. Mr Pritchard brought up the Little Neston drainage system; he owned about twenty cottages that had no sewerage outlet and had to be drained into ditches or suchlike.

Little Neston, complaints over holes in the road

Grocer William Garnham of Bridge Street was proudly displaying in his window a single-yoked goose egg weighing ¾ lb . It was claimed that the bird’s triumphant exclamation after producing the egg was heard for a considerable distance.

At the start of February twenty-two choir boys from the Parish Church had a great day out with a trip to Henglers Cirque in Liverpool, followed by a visit to Lewis’s, Reynold’s waxworks, and St George’s Hall to hear the organ, coming back through the Mersey Tunnel and catching the 9pm train to Neston.

An entertainment in connection with the Church of England Temperance Society was held in the schoolrooms in mid-February. Songs, violin solos, vocalists from the infants school, humorous renditions and a pianoforte duet resulted in several locals signing the pledge. The Little Neston Band of Hope managed to attract around 150 children and many adults, who listened to the hon sec pointing out that Samson had been a teetotaller. Five Little Neston residents signed the pledge.

Yet another event in the busy social calendar was the Cricket Club Ball in the Town Hall. Some local gentry attended but an epidemic of illness and several bereavements prevented a number of guests attending. A string band from Birkenhead played from 8.30 to around 3am. Mr Sutherland from the Golden Lion once again did the catering. The gentry included Bushells, Haighs (Leighton Banastre), Churtons and Russells (Vine House) and the programme of twenty-four dances included quadrille, waltz, polka, lancers, Highland Scottish, and a galop.

Much discussion was going on in the Local Board meetings about footpaths – the blue bricks or cinders. Conflict erupted between the chairman Dr Russell and Mr Wyse (he of the above Samson lecture) who was accused of coming to simply kick up a row though he had not been properly elected onto the Council…

The annual report from Chester Infirmary gave some interesting figures about the Parkgate Convalescent Home, twenty-four years before its time as a Red Cross World War 1 hospital. Out of 339 patients treated, 25 had been fully cured, though we have no idea from what they had been suffering. One inmate was hauled up at the Petty Sessions for returning to the Convalescent Home drunk and being abusive to the Matron so the Parkgate P.C. had to lock him up. 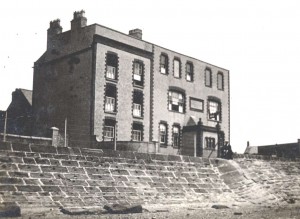 A number of men (including a Rev from Thornton Hough) were being prosecuted because their dogs were wearing imperfect leather muzzles, the landlord of the Hooton Hotel was drunk in charge of a horse and cab in Neston, and a man from Birkenhead was asleep in charge of his horse and cart. The usual line of probable poachers, and drunk and disorderly locals, male and female, made an appearance. Theft of a piece of cod from the cart of Edward Henshaw, Neston farmer, resulted in a month’s gaol with hard labour for a New Ferry man.

A gypsy funeral caused some interest in Willaston, when those accompanying the body made loud demonstrations of grief, with one excited female mourner upbraiding the deceased’s husband for the way he had treated his late wife. There had been trouble in Birkenhead at the Wake.

The funeral of Captain Henry Ward took place in early March; he had lived at Woodpark, on Chester High Road, the house near Hanns Hall Road with a small viewing tower in the garden. Captain Ward had provided the mission hall (mentioned earlier, on site of present Methodist Church). He was a leading member of the Mercantile Marine service in Liverpool, and chairman of the Tug Owners Association.

Feelings ran high at the annual meeting of the Neston Town Hall Company Ltd., Col Lacy of Moorholme (now Springvale down Moorside Lane) vice- chairman, conducting the meeting. They had already had three secretaries, and the meeting had had to be delayed.  The method of accounting caused a big division among the shareholders and directors including W.G. Scott (now the newsagent at the Cross), and Mr Clarke from Leahurst. It was proposed that a proper accountant rather than Mr Bulley be used as auditor. A number of strong opinions were expressed. (This sort of problem  could never happen now the Town Hall management is in the hands of Neston Town Council  of course– Ed.)

The March Local Board meeting discussed at some length the salary of the surveyor, John Morris, who had designed the Bushell Fountain; he was far from happy with the terms offered after eleven years’ service. He made it clear he would accept another post elsewhere if it was offered, and darkly commented that there was another department which needed some light throwing on it…