‘..a dignified and worthy Nestonian.’

William Quay was born in Neston and baptised on 23rd August, 1778, the oldest child of John Quay and his wife Hannah (nee Thomas). John Quay and Hannah Thomas were married at Neston church on 21st September 1777. John’s occupation when William was born was recorded as ‘labourer’ but by the time their second child was born in 1780 John’s occupation had changed to brewer. While William and his brother and sisters were growing up their father was an innkeeper in Neston possibly at the Nag’s Head which was situated in Neston where the HSBC bank now stands. When John died in 1799 his wife Hannah continued as licensee for a few years.

William began his career as a joiner and this was his trade when he married Betty Harris at St Anne’s Church in Liverpool on 19th September 1805. His mother, Hannah, died the following year and she was buried in Neston on 30th June. In her will she named her daughter Mary, William’s sister, as executrix and left each of her surviving children, William, Mary, John, Hannah and Nancy, £25 each. The residue of her estate she left to her daughter Mary. Mary continued as licensee for a short time until her marriage to Lemuel Welch, a Neston joiner, on 15th October 1807. William’s brother, John, became a shoemaker and left Neston to live in Forde, Shropshire shortly after his marriage to Elizabeth Edwards in 1810. William’s sister, Nancy, also moved away from Neston to Birkenhead after marrying grocer John Waring in Bebington in 1813.

In the same article Gleave describes William as ‘a man of exceptional energy and enterprise’. Although he was originally a joiner by trade during his working life he was a successful builder, an estate agent, an auctioneer and a farmer. George Gleave recalls that he had a yard in Raby Lane opposite Londsdale’s school where he employed sawyers, joiners and wheelwrights. He was one of the contractors employed by Joseph Hayes Lyon in the building of Ashfield Hall and stables between 1819 and 1821. His largest contract, and possibly the one for which he is best remembered, was for the building of the Asylum at Chester. Work began in March 1827 and the building was completed in September 1829.

Following the Poor Law Amendment Act in 1834 the provision of relief for the poor in Neston, along with other Wirral townships, became the responsibility of the Wirral Poor Law Union. In 1836 the Wirral Union invited contractors to tender for the building of a workhouse at Clatterbridge to accommodate 130 people initially increasing later to 200. William Quay was the successful contractor.

At the same time William also worked for both the Mostyn and Hayes Lyon family as agent. Joseph Hayes Lyon owned land and property in Willaston and Prenton as well Neston and Little Neston, some of which was leased from the Mostyn family. When Joseph Hayes Lyon died in November 1836 his property and estate passed to his brothers John Winder Lyon Winder and Edmund Henry Lyon, and sister Mary Anne Jane who was married to Uvedale Corbett. The family also owned Vaynor Park in Powys in Wales through their mother’s family, the Winders. William Quay continued to act for the family after Joseph Hayes Lyon’s death, organising the sale of some goods and assisting with the letting of Ashfield Hall although he was incapacitated briefly in 1837 when he was injured in a fall from his shandry (a light horse drawn cart or carriage).

When Edward Mostyn Lloyd Mostyn inherited the Mostyn estate in 1840 he initiated repairs and improvements to the front at Parkgate some of which were carried out using stone quarried from Mr Quay’s land at the junction of Buggens Lane and Leighton Road.

In 1832 he also acted for the executors of Mrs Mary Browne, widow of Captain James Browne. (She, with her daughter Jane, was one of the founder members of the Neston Female Friendly Society).

He was also local auctioneer and for a time he operated the business as William Quay and Son with his son John until John died in 1837 at the age of 31. Only one of his seven children, Betsey, survived him, three died in childhood and his son, William, died in 1831 at the age of 17 and his daughter, Hannah, in 1833. This business extended to Chester and more distant parts of Cheshire in 1829 and 1830, perhaps because of contacts made during the building of the Chester Asylum. 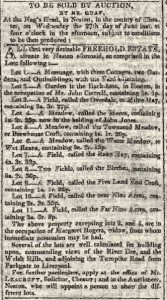 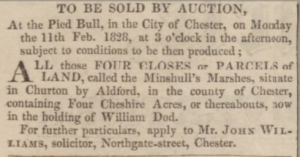 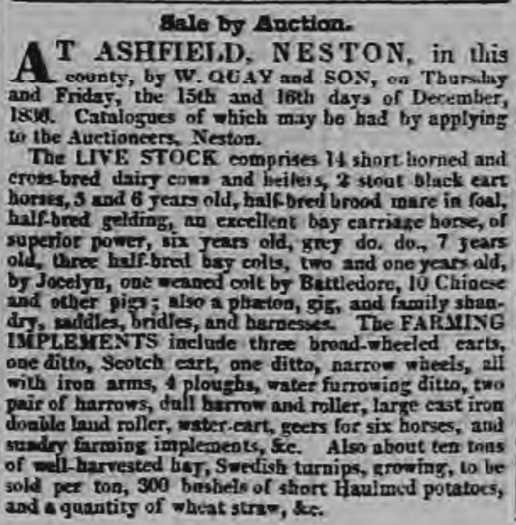 He was a member also of Liverpool Agricultural Society. In 1834 their annual show was held in the Old Infirmary Yard, Lime Street with a dinner afterwards at Lucas Repository, Great Charlotte Street. Included amongst the distinguished guests was Sir Edward Mostyn. Williams name again appears amongst those awarded prizes during the evening.

‘To Mr William Quay of Great Neston, as a tenant of a farm containing 132 acres for making a in a substantial and durable manner, a reservoir for the reception of dung water- The Society’s silver medal’
Liverpool Mercury 3rd October 1834

When the Wirral Farmers Society was formed in 1842 he was amongst those joining. Evidently he made an unsuccessful attempt to start a society for the Neston area but there was insufficient support.

1845 Chester Chronicle – Friday 24 January 1845
‘several attempts were made to form a Farming Society in the neighbourhood of Neston, particularly by Mr Quay, a distinguished promoter and advocate of the extension of agricultural knowledge’

Ploughing competitions occurred regularly especially for local farming events but William initiated a competition of his own in March 1841. He challenged Mr John Garner, who had moved from Stand Park farm owned by the Earl of Sefton to Leighton Hall farm owned by the Honourable E.M.L. Mostyn, to a ploughing match. The ploughing was, of course, not done by them but by their ploughmen and when Mr Garner’s man was declared the winner Garner suggested that, as they each had four men, they should compete against each other in another wager, ‘Lancashire v Cheshire’.  Garner’s men were again declared the winners. His  men used iron ploughs made by Mr. John Hamilton, of Torthorwald, near Dumfries. (Chester Chronicle – Friday 12 March 1841. For full article click here)

When William died in 1846 and was buried at Neston on 23rd May 1846 his daughter Betsey was by then married to John Penketh, a farmer of Hargrave Hall farm near Willaston, and had four children. His only surviving child, she was named as the main beneficiary in his will which also made provision for a trust fund for her children. Betsy was widowed the following year when her husband died at the age of 33. She continued to farm at Hargrave into the 1860s but by 1871 had moved to King Street in Bebington where she lived with daughters Bessie and Alice who were both governesses. Her daughter, Jane, was married to a tanner, George Southcomb and her son William was farming in Raby. Shortly after William’s death his goods, including farm stock, furniture, building materials and tools were offered for sale by auction.

George Gleave’s article closes with this tribute to William Quay.

Mr. William Quay was a man of sterling integrity. His respectability and high moral worth were of general repute. He stood high in the estimation of those among whom he lived. Every movement that had for its object the social and material well-being of those around him found in Mr. Quay a prominent supporter, and we are therefore pleased to remember him as a dignified and worthy Nestonian. 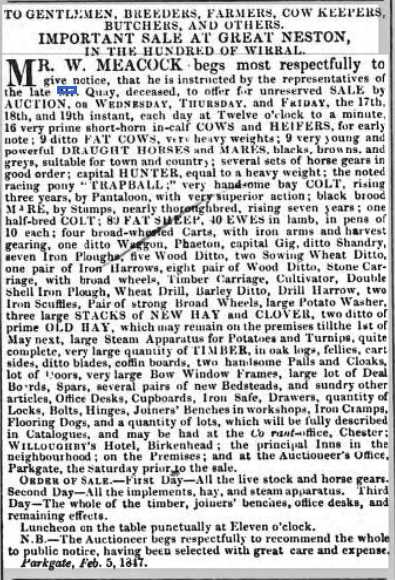 Newspaper articles accessed through The British Newspaper Archive
Newspaper images ©THE BRITISH LIBRARY BOARD. ALL RIGHTS RESERVED.
http://www.britishnewspaperarchive.co.uk/
Newspaper articles are also available on www.findmypast.co.uk.
These are both paid for services but Find My Past and Ancestry on line are both available for use free of charge in most Cheshire libraries.
A list of the Hayes Lyon family papers and correspondence can be found on the National Archives website
http://discovery.nationalarchives.gov.uk/
The papers themselves are held at the Chester Record Office
http://archives.cheshire.gov.uk/home.aspx