The Charity of Nessie Mathews and John Monk (to give it its official title) is perhaps better known locally as the Mathews Monk Charity. It started in the latter half of the nineteenth century and, unlike some earlier Neston charities, is still continues. It was founded with bequests from Nessie Mathews (nee Monk), who died 12th December 1874 and from her brother John Monk, who died 2nd May 1880.  Nessie Mathews and John Monk were brother and sister, children of Esther Monk (nee Matthews) and her husband William Monk who was customs officer at Parkgate. Nessie’s mother and sister, Arabella Monk were both founder members of the Neston Female Friendly Society when it began in 1814.

Esther ‘Nessie’ Mathews was born in Neston and baptised at the parish church on 18th March 1799. She was the youngest in the large family of William and Esther Monk. She married Mervyn Otto Mathews of Sandymount Green, Dublin on 12th May 1820. Her older sister Elizabeth had also married a resident of Sandymount Green, Dublin, Edward Acton Gibbon in 1802. In 1841 Nessie was living in Parkgate and was most probably a widow at this time. She was certainly widowed by 1851 when she was living in Parkgate Road with her older brother John Monk, R. N. Their brother Charles also lived in Parkgate Road. She continued to live there until her death on 12th December 1874.
In her will, proved at Chester on 7th January 1875, she left £100 in trust for the benefit of the poor of Neston and Parkgate to be administered by her nephew William Brown of Chester.

“and bequeath to my nephew William Brown of the city of Chester, the sum of one hundred pounds upon trust to pay and apply the same for the benefit of the poor of Parkgate and Neston in such manner as the said William Brown in his discretion shall think best”

John Monk was born in Parkgate and baptised at Neston parish church on 18th September 1791. Like his brothers, Charles and Joseph, he embarked on a naval career, joining the Royal Navy in 1810  following which he saw active service in closing years of the Napoleonic Wars. He was a midshipman at the Battle of Copenhagen in 1807 and was a veteran of a number of naval encounters in the Mediterranean when he was severely wounded in the Battle of Algiers in 1816, sustaining an injury to one arm and the loss of one eye. He was discharged on half pay and in the years that followed commanded his own ship in trading around the world first with the brig, William Black, 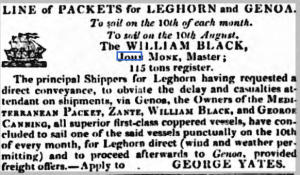 and later the Monk. In 1837 the Monk was lost on the return voyage from Leghorn (Livorno) in Italy.

Captain Monk seems to have retired after this and eventually returned to Neston. Both he and his brother Charles took an active part in the celebrations for Queen Victoria’s Coronation and in some of the regattas held at Parkgate. When Neston Parish church was reopened following extensive rebuilding work in 1875 one of the new stained glass windows

was paid for by John Monk; it features maritime scenes from the bible and is in the west of the church near the font.

He outlived his brothers and sisters, finally dying at the age of 89. Sadly, in his latter years he suffered a fall which, according to his doctor, was followed by a mental decline which eventually resulted in his committing suicide on 2nd May 1880.

Amongst a number of charitable legacies he left £200 in trust to be used for the benefit of the poor of Neston and Parkgate, to be administered by his nephews William and Charles Brown.  His will dated 15th January 1875 was proved at Chester on 21st May 1880.

“to my trustees hereinafter named upon trust for and to be disposed of for the benefit of the poor of Neston as my said trustees shall deem best the sum of two hundred pounds.”

Charles and William Brown were nephews of Nessie Mathews and John Monk. Their sister, Ann Monk, married John Brown of Chester at Neston church on 23rd November 1812. John Brown’s mother, Susanna, established the business which eventually became Browns of Chester. The Browns were a prominent Chester family and various family members served as Mayor of Chester. Both Charles (born 1818) and William Brown (born 1816) died in 1900.  It is not clear how they managed these two bequests or even whether they were initially combined as they are now. In 1900 the local newspaper reported that the Mrs Mathews charity gave clothing to the poor of Neston and Parkgate each Christmas.

The Chester Courant and Advertiser for North Wales 25th December 1901
NESTON. SEASONABLE CHARITY. The late Mrs. Nessie Mathews, who was well known in Neston and who died in 1874, left a Christmas charity to be given in warm clothing to the poor of Neston and Parkgate. A great niece of Mrs. Mathews, now residing in Neston, has undertaken the management of the charity. Last year about seventy people derived benefit from it and again quite lately ninety deserving poor folks have been placed in possession of warm blankets, shawls, shirts, dresses, flannel, etc.

The great niece referred to was Emily Nessie Livermore (nee Brown) who was Ann Brown’s (nee Monk) granddaughter. It may be that the two charities operated separately although it is equally possible that the reporting was inaccurate. Certainly the charity was registered with the Charity Commission in 1915 as the Charity of John Monk and Nessie Mathews and was administered by a board of trustees in Neston. The capital was invested in the name of the trustees and William Brown’s son, Harry Faulkner Brown.  Charity commission returns document the work of the charity from 1917 up to 1953.

The Treasurer was J.P. Gamon.

In 1953 the board of Trustees includes some familiar names:-

The charity provided tea and coal to those in need and the return for 1919 records that 16 people received 2 cwt of coal and ¼ lb of tea for 18 weeks. Local suppliers were used to supply them: Mrs Castle and John Rees (his shop was where Jones and Chapman is today) for tea and the Colliery for coal. Surprisingly, there were no distributions in 1926, the year of the General Strike when the colliery workers would have been on strike. In the years after the General Strike when the Colliery closed suppliers of coal for the Charity included included H. Jellicoe, Mr Millington.

The charity continues as a registered charity based on the scheme submitted to the Charity Commission on 17th December 1915.  Its activities include distributing vouchers for  groceries, clothing and chemists, occasional awards to a young person towards training expenses and contributions to projects in local schools.  However interest rates no longer generate enough income so the some fundraising is necessary to continue the Charity’s work. For further information see the Charity Commission website.