The Vaults, The Letters or the Neston Hotel

Nearly four centuries ago, before the greater part of Parkgate existed, Neston’s main street had a large and roomy inn, much used by travellers waiting for tides and winds to suit their sailings from Neston Quay. It was opposite to the site on which our Town Hall now stands and the only building we would have recognised would have been the sandstone barn, further up the street and the farmhouse that became the Brewers. 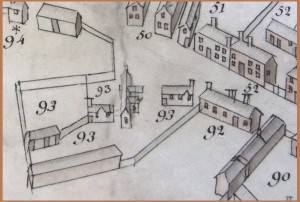 The site of the early inn in the 1730s. The sandstone barn that we still see on the High Street is the building near top left corner.

The inn was run by the Betson family in the  1630s. Around a courtyard open to the street were the inn and farm buildings including the brewery and dairy; there was a wine cellar and a cellar for food storage, stocks of malt, oats, barley, wheat and corn and cheese, meat, bacon, charcoal for fuel, yarn, woollen cloth, linen, and everything to make the establishment self-sufficient. 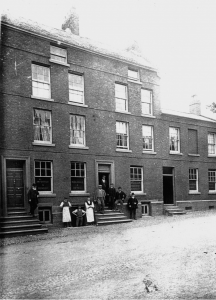 The Letters (Vaults) before 1899 alterations 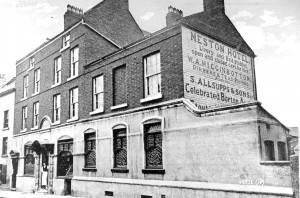 The same building after alterations and new windows

Some time in early 19th century the ancient buildings were rebuilt in brick and in 1898 the pub, then known as The Letters, was sold by William Jones, the independent land-lord, to Samuel Allsopp and Sons as ‘old but in thoroughly good repair’. It soon had a name change to the Neston Hotel. This was the principle licensed house on the main street, opposite to the Town Hall, with eight other pubs within one mile, though all of inferior class to the Letters with its two bars, smoke room, drawing room, large parlour and five bedrooms.  It still had thirty stables, a coach house, cow-sheds, a dairy, a harness room, bowling green and small pavilion.

The brewery had no intention of sticking to Mr Jones’ opening hours of a six-day week closing at 10pm. Sunday, it was said, was the most popular day for visitors to the town and there was plenty of room for ponies and traps. It was also the Headquarters of the Cyclists Touring Club. By the following year, 1899, Allsopps enlarged the place by taking in a bedroom from next door and converting a room for billiards.   The place was empty by 1950, when the Ministry of Works were in discussions about acquiring the site for  a sub post-office or sorting office.

By 1954 it was said to be an eye-sore and a dangerous structure. In early December 1955 various tenants had been given notice that demolition would soon take place and the tenant of a small cottage at the back was offered one of the brick hutments at Clayhill. By 1957 nothing had happened and no-one was holding out much hope for a new Post Office. By 1965 the Brook Street site was chosen for a sorting office and the Neston Hotel site was for sale.

An old Neston ‘legend’ was quoted to me decades ago, namely that Lord Nelson had signed the visitors’ book to this establishment…..anybody seen that interesting evidence?