The Lamp on the Bushell Fountain

In July 1882 a Neston landmark was ceremoniously dedicated in front of a crowd of well over a thousand local residents. They had much for which to thank the man in whose name it was erected. This was Christopher Bushell who in the previous two decades had been one of the prime movers in civilizing the town.

As a Neston magistrate  in the 1860s he had often had to deal with cases of drunkenness and brutal assaults on women and children. He recalled how people just turned their animal out on to the sides of the roads to the peril of passers-by, and at night let them into farmers’ fields where they trampled and ate the crops. The only school had been in a wretched building now used as a drill shed. The absence of sewers and fresh water had meant that Neston suffered particularly badly in the 1866 cholera outbreak, when sixty people died. 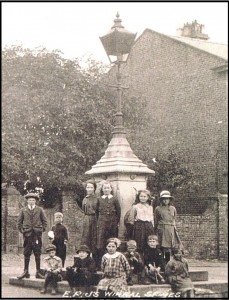 The fountain in WW1.

But by 1882, Mr Bushell pointed out at the ceremony, we had a school in every local township, several churches and parsonages and a rebuilt parish church, decent drainage and a good water supply.

So as a tribute of respect, a subscription fund had been  launched, and as the fountain was dedicated to the use of the public, the Local Board agreed to take care of it and provide a full supply of water night and day.  It would be an ornament to the town, and appreciated by many a tired wayfarer who would ponder the religious texts whilst drinking from the chained cups.

The water was not a problem but gas for the lamp gave trouble for years. Despite the original plan for a handsome lamp with enamel reflectors to shed an abundance of light, the gas company refused to supply gas for three burners as designed and an ordinary street lamp was used instead at first. In March 1883 a gas leak posed questions about who would pay for the gas, caused by defective fittings used by the Local Board employee. 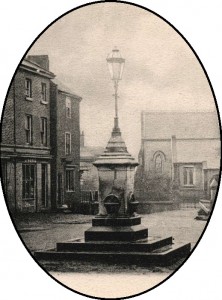 Four years later there were comments that it should be kept lit all night, but it was in reportedly the worst light in the district. It was said that a  decent light would  have been top heavy for the stand.  Many different styles of  lamps have been used over the years.

Sixty designs for the drinking fountain had been submitted, but the Local Board chose the one by their own surveyor, John Morris.  It was of grey granite, with two red granite bowls and base, on two York stone steps , 9’ and 6’ square.  Weight was 5 tons.   Four bronze lions’ heads provided the water.  It was 8’6” in height with the lamp a further 7’6” above the stone work.