The timber dumps in Neston were part of a national war-time scheme to recycle used timber from bombed buildings and refitted ships. By the end of 1940 hundreds of former passenger ships and coasters had been requisitioned by the War Office for use as troop and supply carriers, and thousands of tons of timber from cabins, decks and fittings were being heaped all around the docks at Birkenhead and Liverpool, taking up space and causing a fire hazard. So it was brought to Neston, a safe distance away from the docks in case of fire, yet near enough to be transported cheaply to be dealt with.

As well as large sections of mahogany from luxury passenger cabins there 2 inch thick planks of teak decking, wooden masts, birds-eye maple (a very expensive timber used for dance floors and passenger lounges), ships’ staircases, and baulks of beautiful yellow pine. The army disposal squads had just gutted the ships, leaving them empty and ready for war use.

Besides lorry loads of ships’ timber there were dozens of huge crates which had contained parts of aeroplanes shipped as deck cargo from USA to be assembled here, and also a large consignment of damaged timber from bombed-out houses in Liverpool and Birkenhead – roof spars, purlins, windows etc.

A local building contractor, Thomas Norman, from Little Neston, was paid by the local Council to organise a suitable site in the Neston area, and the first reclamation dump was started on Burton Road, on a narrow strip of land running from the road back to the railway, almost opposite Badger Bait. A small office was put up and the deliveries of timber began, but there was soon so much wood that other sites had to be found. Another site was on the Neston road, going into Ness Village, on a field next to Miss A. L. Bulley’s house which she shared with Miss Norman (Tom Norman’s sister): this field was later the site of Reg Leeman’s house. This dump was supervised by Henry Jones (nicknamed Swad) from the bottom of Marshlands Road. Lots of women from the Colliery worked there part-time.

The last, and largest, site chosen was the large field behind Rose Farm in Little Neston, running down alongside Badger Bait to the Burton Road, the site of the present Rose Gardens houses (see Rose Gardens, Little Neston). In 1941 Badger Bait was a narrow single track winding lane with a long curve and a row of cottages at the top. These cottages were then demolished and replaced by an air raid shelter.

The timber was brought by lorry to the Rose Farm field where it was sorted into stacks according to length and type of wood. As most able-bodied men had entered the armed forces, pensioners, women, and those disabled or unfit for Service were employed to run the site, sorting and stacking and pulling out nails. In charge of the day-to-day running of the site was Jim Bushell who had lost one lung through an injury. He employed, among others, his father Tom Bushell, a retired fisherman, and Richard Smith, a retired joiner, who were both from Parkgate and both in their 60’s. Women who worked full time at the dump were paid around £5 per week.

As imports into the UK were severely restricted during wartime to foodstuffs and essential raw materials there was a great shortage of building materials which were rationed out and issued only on licence from the local council. No new building was to take place during the war years unless it was essential to the war effort – i.e. repairs of air raid shelters. So second-hand timber from the dumps was in great demand. 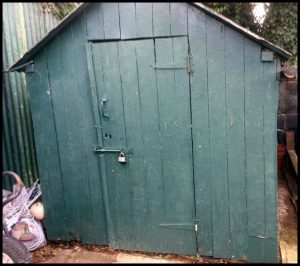 Shed made of aircraft packing cases in Thomas Norman’s house at Newton, Little Neston (thanks to Don Hardy for permission to use this photograph)

The aircraft packing cases came into their own as garden sheds all over the district, as the crate sections (20ft long with strong battens of 6” x 2” and 4” x 2”) were very strong and durable. Many of them still survive as garden sheds 50 years later.

Other better quality wood, including slabbed mahogany pieces 6ft long, made dozens of wardrobes, again many in use to this day. Gate posts were made from sections of masts and there was a good trade in piano stools of best quality mahogany and pine. Much of the timber, including choice teak, redwoods, yellow pine and mahogany found its way to local farms where it was used for fencing, shippons, chicken sheds and farm buildings.

A 5-ton lorry load of timber cost £5 delivered and supply was plentiful. As well as selling timber, the dump also sold nails and screws which were pulled out of the wood and sorted into drums for the scrap man. Strips of phosphor bronze were also used as thresh-hold pieces in local houses, or stair treads.

The Rose Farm dump lasted from about 1941 to 1945/6 when at last new timber could be imported once more. Returning service men were looking for houses and jobs, so the local council closed the dumps and decided to start on its first new housing scheme since the war, to be built on the dump site, now renamed Rose Gardens. Badger Bait was widened and straightened out, and the air raid shelter demolished.
Several local firms were contracted to buld the Rose Gardens house, among them Jack Henderson from Eldon Terrace, Faircloughs of Willaston, Capstick from Dunstan Lane/Willaston, Rathbones from Burton, Frank Norman of Mellock Lane (Father of Henry and brother of Tom) and Tom Norman of Newtown, Little Neston. During the war years, when all the local labour force of building tradesmen were away at war, Tom Norman was kept busy running the dump, a building firm and the majority of local funerals, with a team of older tradesmen who were past conscription age, and apprentices.

The Rose Gardens field was cleared and levelled and building started around 1947/8, the Council Building Clerk of Works being Bill Ashbrook for Marshlands Road. These were the first new houses to be built in the district after the war. See Rose Gardens, Little Neston