An attempt to establish a Neston Football Club was first made in 1884, using a field near the site of the old station on Station Road/Mellock Lane. Despite forty members initially joining, this venture failed, but after several further attempts throughout the 1880s, a Neston Football Club was successfully launched on 15th September 1890. Well supported by the Parish Church (The Vicar Canon Gleadowe was the President), it was agreed to use the field where the quoiting ground was sited, on Raby Road, probably the present site of  the gardens of the houses on the north side of the road. Sport was a good way of keeping the men out of the pubs, and Rev. Barrett who had established the popular Quoits Club in the 1870s, also chaired the 1890 inaugural meeting. 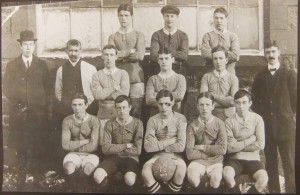 The new club’s first match was played in October against New Ferry, but a couple of  Neston players did not turn up, and a  man had to be borrowed from the other side .  (G. Brownsworth,  E. Jones, G. Bell, C. Swift, W. Oxton, J. Tudor, H. Davis, T. Medcalf, R .Evans, W. Johnson  match lost, 3-0). A couple of weeks later they played the brand new Heswall club and beat them 5-3, (C. Swift, G. Bell, W. Oxton, J. Jones, W. Owens, G. Brownsworth, R. Evans, W. Rugman, S. Williams, S. Smith.) Neston & District, Neston Victoria, Ness, Neston Liberals, Little Neston, Neston Scouts and Neston St Marys all had teams in the early years of the 20th century and no doubt many a game was played  informally in the streets and fields. A game in Burton Road on a Sunday resulted in a court appearance for several lads from Eldon Terrace in 1908, Henry Peters, Albert and James Lewis, John Mellor, Joseph Bartley and John Cottrell, fined 1s each. Another group were fined in the same year for playing in Bridge Street – Edward Swift, Aaron Jones, William Ryan, and Henry Peters, again. Sunday football also caused trouble in March 1914 when Sergeant Bee had Charles Millington, John Smith, Thomas Moreton and J.Henry Jones in court, 2s each. 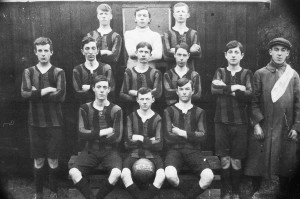 Neston St Mary’s team in 1903 included Bartley, Anyon, Swift, Anderson and Harry Grundy, son of William Grundy, parish clerk and later licensee of the Greenland Fishery. Harry was an assistant at Bradleys, men’s outfitters where the optician now practices. In December 1905 and the first part of 1906 he was playing for Everton F.C. and its Reserves but did not play in the F.A. Cup Final in April. In April 1908 he played outside left for Lincoln City with fellow Nestonian H. Smith (ex Chirk and Whitchurch). Harry Grundy came from a large family, with sisters Florence and Alice, and brothers William, Thomas, Eveleign, Charles, Herbert and Ernest, 25, a bricklayer. In December 1903 Ernest had been involved in a fight outside the Liberal Club (the Institute/Civic Hall) with Henry Pritchard from Little Neston who had ended up with a fractured skull and died within a couple of days, whereupon Ernest killed himself by cutting his throat in his bedroom. In February 1904, six weeks later, William, 31, died and in October 1904 William the father was cutting a tree in the churchyard when he fell over the wall into Church Lane (the wall was higher then) and was badly injured.

The Institute team like many others was disbanded soon after war broke out. Harry had been playing for the Institute team in early 1914 as had son of the former stationmaster Private W.E. Rooke who went through Gallipoli and was wounded in March 1917. Also wounded in July 1917 was Thomas Finchett, another Institute player, son of the landlord of the Coach and Horses.   Harry Grundy received head injuries in May 1917 in France serving as a Private in the Cheshire Regiment, but survived. The desperate need for war-time allotments meant the digging up of the Institute pitch in 1917.