My name is Ann Leah Howarth (nee Brassey).  I always knew that my Dad’s family came from Thornton Hough in Cheshire and I remember when I was about 16 years old and learning to type my Dad gave me some of his handwritten notes and asked me to type them up.  I did so – very badly.  19 years after his death I was on holiday with my husband in the Cheshire area.  I suggested that we go to Thornton Hough and have a look.  I vaguely remember typing up the notes and remembered and few things but as it had been around 39 years since I had typed them my memories were sketchy to say the least.  We enjoyed the visit to this beautiful place and when we came home I decided to find the notes that my Dad had given me so many years before.  The following work is Dads own and so written through his eyes with his voice.  My Dad’s name was Eric Richard Brassey.

I hope you enjoy it.

A Few Memories of Thornton Hough

In 1907 Harry Brassey was born at number 4 Manor Road, Thornton Hough.  He was the youngest of three brothers – Tom, Dick and Harry.  Harry was my Father.

He was educated at the village school and later trained in Liverpool to be a heating engineer.  He travelled ten miles to work every day by bike – unless he was working away, which he did quite often.   That is how he met my Mother Elsie.  Her family had a small grocers shop in Dyson Street Blackburn, which was close to the Royal Infirmary where my Father was installing the heating.  He would pop into the shop to buy things but really to see my Mother.  They were married on the 3rd September 1929 at Park Road Congregational Church in Blackburn.  This has now been demolished, at the time of writing it is the site of the local Ice Rink. 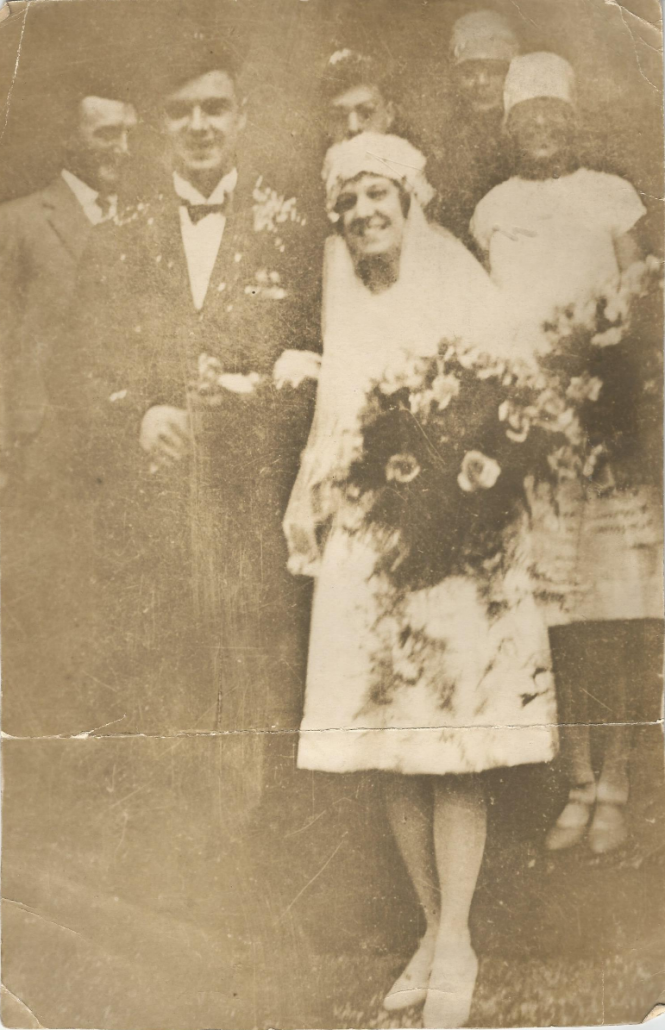 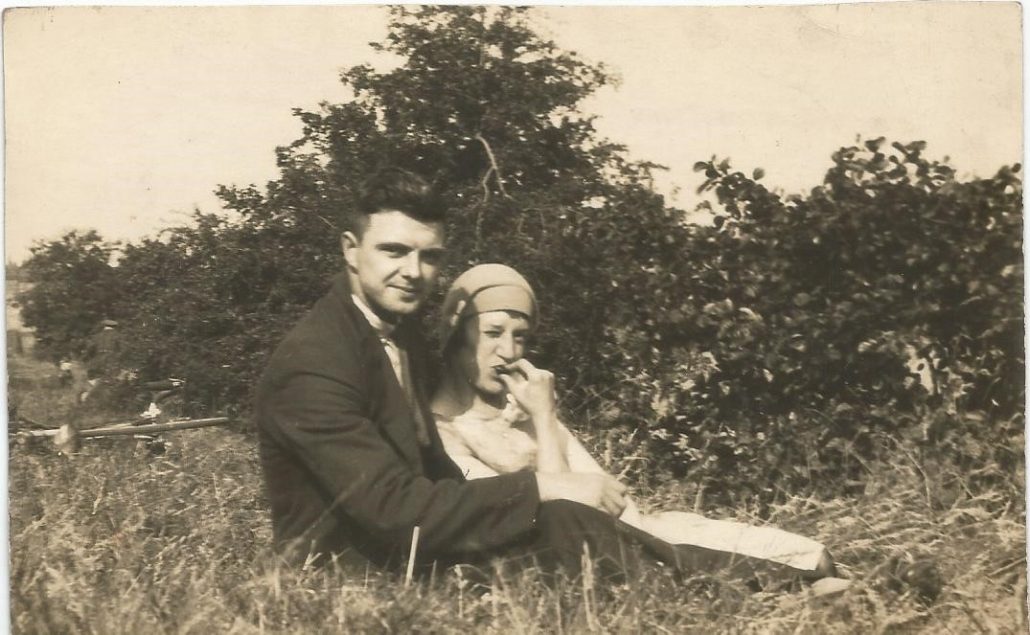 Although they were married in Blackburn they moved into a flat in Birkenhead for a short while and then on to a wooden bungalow at Thurstaston near Neston on the Wirral.  All was well until unfortunately my Father hurt his back at work.  He stupidly told a workmate that ‘he would take a few days off as he deserved it – as he worked such a lot of hours for the firm’.  The man told the boss and the result of that was that he was sacked.  The only job he could get was stoking boilers for 12 hours per day 6 days a week.  That was in 1932.  I was born the same year on the 11th July.  My Father stuck to the job as long as he could but finally he had to give it up.

Things were tough and after a period of unemployment Mum, Dad and I all moved in with my Granny Lizzie Brassey at her cottage in Thornton Hough.  Six months after we moved, the bungalow at Thurstaston was burnt down along with several others in a spectacular fire.  Fortunately we were safely ensconced in Thornton Hough by then.

My Mother threw herself into the local activities becoming a member of the band and went on to managing productions at the local Women’s Institute.  I still have photos and a press clipping of her in her role of producer for the local W.I.  production of ‘The Butterfly Queen’. 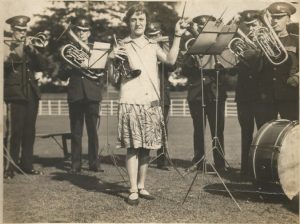 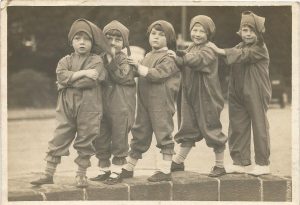 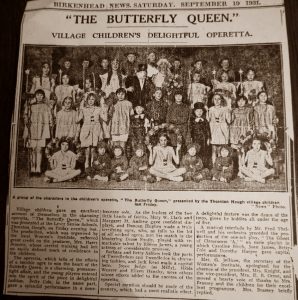 Press cutting and cast members of The Butterfly Queen 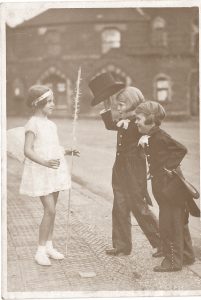 Thornton Hough had a wonderful community spirit. They had their own band subsidised by Lord Leverhulme. The band was very dedicated and at one time even went to a competition in Belle Vue – They didn’t win. 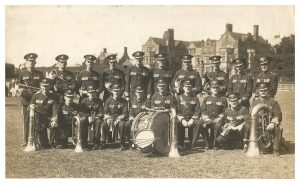 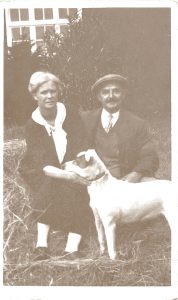 Here begins the realms of memories and information passed down to me by my Father and Granny.

My Grandfather was called Joseph and he was born in approximately 1878.  My only memory of him was just after he’d had an accident to his right hand when a block fell on it when he was working on Liverpool Cathedral.  I remember being frightened but fascinated as he removed the bandages to show my Father the extent of the injury.  He was a Stone Mason by trade.  A thick set man about five foot seven with a large moustache.  He was a powerful and scary man with a booming voice.  He went to work for Mr. William Lever – later Lord Leverhulme as an Estate Stone Mason and was given an estate cottage when he married my Granny.  They both worked for the estate. Granny was a maid at the ‘big’ house.  Joseph lived in the cottage for the rest of his life as did my Granny who died there.

In 1914 he enlisted in the army at the outbreak of the First World War.  As he was older than most of the men who enlisted he was made Sergeant.  He saw action in France for the four years of the war and I remember the large framed wall plaque with all his medals.

Unfortunately his son, my Uncle Dick, wasn’t so lucky.  He ran away to join up when he was only 16 years old.  He was sent to France within days of joining up.  He took with him the scout bugle belonging to his brother, Tom.  As all the family were involved with the local band at Thornton Hough – he knew how to play well and was good enough to be made the company bugler.  He was killed in France at the age of sixteen and a half.

From an early age I remember going to the yearly Armistice Day parade at the Village war memorial.  Lord Leverhulme’s son used to attend in uniform on horseback.  This looked very impressive to a child.  But I remember it being a sad day as my Granny always cried.

My Grandfather Joseph died at the age of 61 in 1940.  He was carried through the village with his coffin draped with the Union Jack.

Opposite my Gran’s house was the church built by Lord Leverhulme.  In 1908 I believe my Father was the first baby to be baptised there.  I was baptised there myself much later.  The man who actually built the church lodged with Grandma and Grandad for the time it took to build.  During this time he became almost one of the family.  His next big job was in Burnley in Lancashire and he promised that the first row of houses he built would be named ‘Brassey Street’.   Brassey Street stands to this day in Burnley – just off the Padiham Road.

In Thornton Hough there are two churches – which does seem rather strange for such a small place but as they say ‘thereby hangs a tale’.  As told to me by my granny.  How much of this is absolute truth I cannot swear to – but she was there at the time…..

The oldest Church has the grave yard in which several of the Brassey family are buried.  However, they all attended the Church across the road.

The story of how this second church came to be built goes like this:-

One day out for a drive in his coach Lord Leverhulme spotted the Vicar walking down the lane, he stopped and asked him to get in. 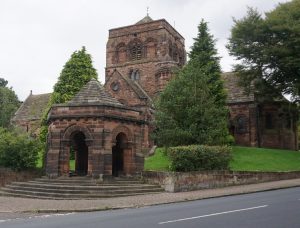 “I am composing my sermon and communing with God – drive on.”

“I wish to speak with you”

“In that case God will have to carry on without my support.”

And with that he drove off back to the Manor and straight away asked an architect to draw up the plans for a new Church.

My Grandfather worked on the Church and my Gran always said that the lichgate was all his own work. 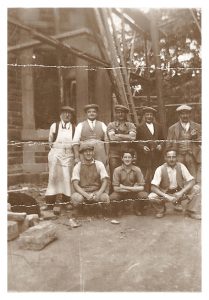 My Grandfather was involved in the building of the famous Port Sunlight village of the Lever Brothers soap fame.
Working for the estate he did all sorts of jobs and one of them was working on the Lady Leverhulme Art Gallery.  At that time Lord Leverhulme was buying vast amounts of things with an eye to filling the museum rather than with an eye on the love of art and culture.  Things came in by the crate load.  Naturally there were boxes and stuff everywhere.  One day when Lord Leverhulme arrived he couldn’t get in for boxes that had just been emptied.  They had arrived that morning straight from the Egyptian agent.  He called Grandad over and said “Joe get rid of these boxes- shift the lot of them – dump them.  Joe protested that they hadn’t been checked out yet and might still contain things.  “If you find anything you can have it but remember it’s all come from the tomb of Tutankhamun and it is supposed to be cursed he laughed.  My Grandfather did find a small bronze figure at the bottom of one of the crates – it was a figure of Osiris.  Wrapping it up he took it home but my Granny ‘went mad’ and straight away put it on the top shelf of a cupboard out the way, telling my Grandfather to leave it there.  There it stayed until one day in 1940 when he decided to clean it up.  He was working on the Liverpool Cathedral on loan from the Estate at the time and the next day a stone block fell on his right hand – six weeks later he died as a direct result.  Back on the shelf went the figure- my Granny being Welsh firmly believed in the occult and was convinced that the figure was somehow linked with my Grandfathers death.

I started these few memories of Thornton Hough and its connection with the Brassey family with the three brothers Tom, Dick and Harry.   You will recall that unfortunately Dick was killed in the First World War. I was named Eric ‘Richard’ after him.  But now we come to the other brother Tom.  There were many stories about Tom.  I believe he was a ‘way out’ character very different from my father.  In every way a drinking man.  After a night out at the Seven Stars, Thornton Hough – friends would place him on his bike and point him in the direction of Heswall where he lived.  He would merrily cycle home only to fall off at the other end and be helped into the house.

When he was a young man he was ‘involved in trouble’ with a young lady.  My Grandfather decided to try and get him away and asked Lord Leverhume if he could find a position in a large house in London as a trainee footman.   So with his letter of introduction and few pounds they had managed to scrape together, he set off for London.  After a week when he still hadn’t arrived at the house in London they began to worry.  But they shouldn’t have bothered because several days later he arrived back home in Thornton Hough having spent up.  They never found out where he actually went.

Harry my lovely Father went on to live in Blackburn with his wife Elsie, son Eric (me) and daughter Joan.  I married Leah Norman – now Leah Brassey and we had two children Ian and Ann.  Joan became Mrs. Prescott and had two children Jacqueline and Stuart.  I am proud to say the name of Brassey lives on in my Son Ian and his family. 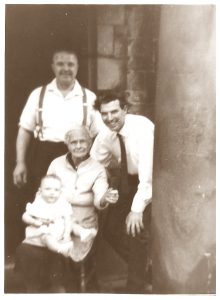 Four generations of the Brassey family. Dad at the back, Granny sitting down with Ian on her knee and me leaning over Granny. Photograph taken outside her cottage in Thornton Hough