Can you help solve a milestone mystery?

Many readers will be familiar with the seven magnificent sandstone milestones that used to line the driveway to Mostyn House School and which have now been relocated to the car park on the site.

The milestones before work on Mostyn house commenced.

An eighth stone can be seen standing at the entrance to the Leahurst veterinary school campus. I recently stumbled across a photo of one of the stones in its original location and this led me to realise that the story is more complicated than originally thought. It is clear that some of the Neston area milestones are missing and I wondered if any readers could help shed light on their whereabouts. 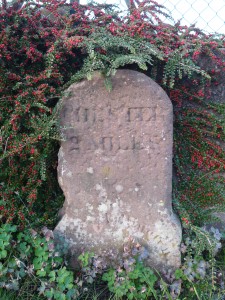 The milestones were originally installed on the route of the current A540 and B5134 from Chester to Neston, as a requirement of the 1787 Wirral Turnpike Act. The Act was responsible for bringing the first properly maintained roads of the modern era to the Wirral, linking Chester to the then principal Wirral town of Neston, and the major seaport of Parkgate. As the word implies, one stone was situated every mile along the route. In 1896, on the establishment of the new Cheshire County Council, the stones were replaced by triangular, cast iron black-and-white ones, several of which can still be seen on the northern side of the road today. 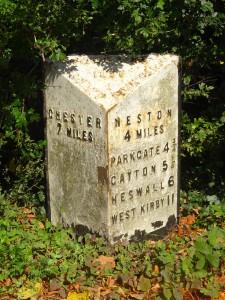 When the iron milestones were installed, at least seven of the sandstone ones were dumped by The Half-way House (today’s Yacht Inn) on the Chester High Road, ready to be broken up for hard core. However, they were found there by the then headmaster of Mostyn House School, A. G. Grenfell, who bought them cheaply and, thankfully, took them to the school where they were erected by the entrance drive.

Each stone bore the horizontal carved word ‘Chester’, followed by the distance from the city in miles and then the location of the stone (usually the township name) in an arc at the bottom. The late Parkgate historian, Geoffrey Place, uncovered the milestones’ story and speculated that there may have been ten in total, as follows:

The lettering on the surviving stones has deteriorated substantially over the years. Those stones with distinguishing features that were at least partly identifiable to Dr. Place when he wrote an article about them in 2002 are asterisked above. Note that, while eight stones survive, he could only identify seven, so the eighth could have come from any of the remaining locations. 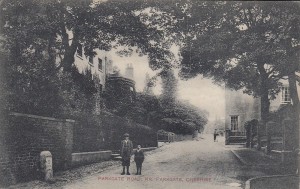 I recently came across a photo postcard of a scene on Parkgate Road, just above the Moorside Lane/Buggen Lane junction, which clearly shows one of the milestones situated there. This bears a number ‘11’ (miles) and what appears to be the location wording of ‘Great Neston’. While the photograph itself is not dated, the card was posted in 1908 and is typical of picture postcards of the Edwardian age. We thus know that were eleven milestones, not ten as surmised. Their locations correspond with mile points shown on one of the earliest detailed maps of the area, made by Christopher Greenwood in 1819. Early large-scale Ordnance Survey maps depict the milestones more specifically (abbreviated to ‘M.S.’) and it is interesting to note the wordings used on them:

Incidentally no OS maps indicate a ‘12’ milestone. The 12-mile point from Chester would be shortly after the Middle Slip on Parkgate Parade, beyond the end-point of the turnpike at the Assembly House at today’s Donkey Stand.

A review of 20th century OS maps suggests that milestones 10 and 11 disappeared some time between 1954 and 1964/5. The mapping of milestone 9 is erratic – the cast iron milestone is present pre-war; not indicated in 1954; depicted, without mileage, in 1965; and missing again on various 1970s/80s maps. Does this somehow reflect the odd succession of milestones at the Leahurst site?

An intriguing possibility is that the 1954 survey was inaccurate regarding stones 10 and 11. Could they, as well as no. 9, actually have been removed during WWII as part of the area’s anti-invasion measures (the pillbox on Parkgate’s Station Road being another such measure)? This is admittedly just speculation, but many similar milestones were removed across the country for just this reason.

In any event, it appears that a number of milestones went missing at some point. These are:

Incidentally, cast iron milestone 8 was depicted on maps at least until 1980, near the junction of the Chester High Road and Hadlow Road, but this has now disappeared too.

So, can any reader suggest where the missing sandstone or cast iron milestones, or their broken remains, might be?

Even if there are no physical remains, I wonder if anyone happens to have a photo or postcard that shows the stones in their original location or moved elsewhere? Or does any older reader simply remember the missing stones in place or being removed?

Any light you can shed on this mystery would be most welcome. 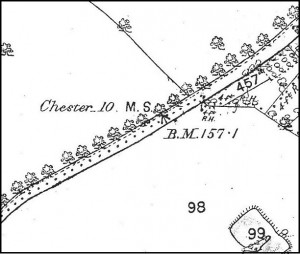 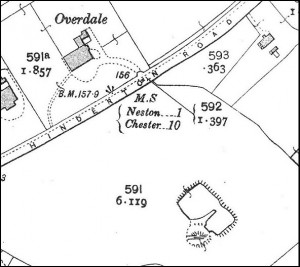 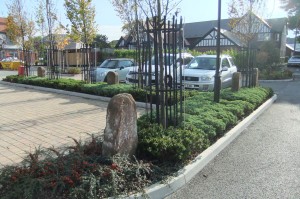 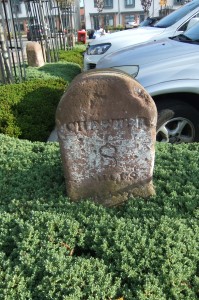