Thomas (Tom) Crimes Ashbrook (1877 – 1942), along with other civilian platelayers and railway workers, volunteered to work with the Army in France during the Great War. Although these men, drawn from the various railway companies, made a very valuable contribution to the War effort in France, often under extreme working and weather conditions, very little is mentioned when articles/stories are written regarding the 1914/1918 War. Authentic photographs are relatively rare; in fact, copies of the photographs accompanying this account are the only ones the Imperial War Museum has which can positively be identified as being of the civilian platelayers in France during the Great War. 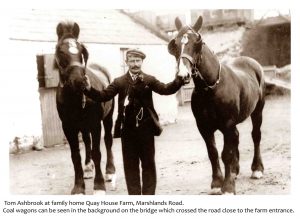 Tom Crimes Ashbrook was born 17th March 1877 in Little Neston the son of William Ashbrook, who farmed the Colliery Farm in Little Neston, and his wife Emily/Emma(nee Crimes). Although he worked on his father’s farm as a young man, by the time he was 21 he was working as a platelayer for the Great Central Railway Company which operated the line carrying passengers from Liverpool and Wirral to North Wales. He was, for a short period a member of a rail workers trade union, the Amalgamation of Railway Servants. In 1905 he married Mary Ann Griffiths and after their marriage they lived in Burkey’s Cottages in Little Neston. They had two children: a daughter, Emily Susannah, born in 1906 and a son Jack born in 1910. When war broke out in 1914 he was 37 years old.

In October 1916 Sir Eric Geddes, Director-General of Military Railways and Inspector-General of Transportation visited France where he observed a need for skilled platelayers to supplement the work being done by the Army’s Railway Troops. A system of narrow gauge railways had been identified as the quickest and most effective method of providing transport for troops and supplies. There was a need for railway track between the bases and the railheads and the railheads and the trenches. The army’s Railway Troops of the Royal Engineers were fully occupied working between the railheads and the trenches close to the war zone where civilians could not work. Although there was a civilian labour force who were able to do the ground work between the bases and the railheads they did not have the skills necessary to lay track. It was decided that the Railway Companies should be asked for volunteers in their workforce to provide the 3000 men required. 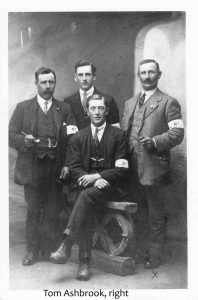 The men were asked to volunteer to work in France, for a period not exceeding three months, on the lines of Communication outside the danger zone. Letters were sent out to the railway companies in February 1917 asking for volunteers and within a fortnight the first volunteer companies arrived in France . Tom Ashbrook was one of the men who went out as part of No 5 Company which was composed of men from the Great Central and Great Eastern Railway companies. They arrived in Le Havre, along with Company No 6, on March 26th. Each company was composed of approximately 250 men which included blacksmiths, carpenters and fitters and 160 plate layers with 8 gangers and 16 sub-gangers.

They were paid a weekly wage, which included war bonuses, for a 54-hour week but with no overtime for any additional hours worked. Lodgings and food were provided by the Army. They were working under difficult conditions, often hampered by a shortage of materials and poor weather and, although working within the ‘safe’ zone some companies were often close to the war front. 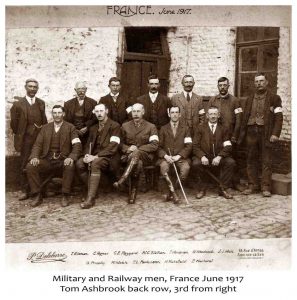 There were also some tensions perhaps inevitable in a situation which placed civilian personnel under army control; the civilian workers were unaccustomed to army routine and discipline and with army staff unsure how to treat them. The inscription on board on the photo reads

Despite all the anomalies, relationship problems aligned with the hazardous work, (some, at one time, kept working over eleven hours a day for ten consecutive days within four and a half miles of the firing line with enemy shells falling on the camp), indescribable severe weather, shortages and all the misgivings, the work done by civilian platelayers was not inconsiderable and was of great strategic importance.

These tenacious, patriotic men should be recognised, acknowledged and applauded. The ‘mission’ was a resounding success and, without doubt, made a valuable contribution to the War Effort and outcome of the Great War of 1914 – 1918.

After the war, Thomas continued to live in Little Neston until his death in 1942. His wife, Mary Ann, died in 1954 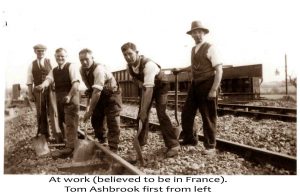 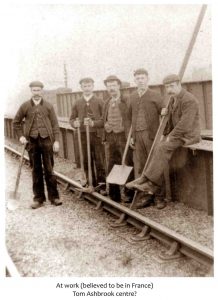