[William Astbury lived in Neston all his life apart from a short spell in Hargrave Lane, Willaston in a house which probably came with his father’s job as a gardener. The family came back to Neston to 43 Mayfield Gardens, later moving to Hawkins Road.
When he left school he went straight to work as a Telegraph Messenger Boy with the GPO). He had some interesting tales to tell about the miles he travelled round Neston and Burton on his bike delivering telegrams and the people he met. He probably wrote this memory in the late 1980s for his granddaughter’s school project. He died in 1993.]

I was born in 1922 in a house in the area behind Goulbourne’s (Greengrocers) commonly known as Tozer’s Yard although the real name at that time was Pennington’s Yard.

I seem to remember there were houses in the square at the top end and more houses to the right, currently used as the entrance to the car park. Goulbourne’s shop at this time was the private residence of the family Tozer who had a few cows on nearby fields and sold milk from the back door. The shop next to the greengrocers, now Temptation, was Tozer’s bread shop. You entered the shop and to the right stairs led down to the bake house. 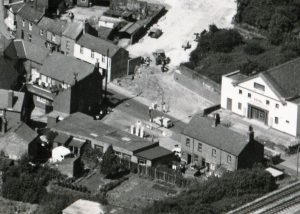 On the opposite corner, Chester Row, was Mrs Mannions sweet shop. Then came two private residences before Brassey’s greengrocer. Then came a row of five or six terraced houses before the cinema, now the Arcade. Films changed twice weekly (balcony seats 6d) with a Saturday afternoon matinee. Musical entertainment before and during the interval was provided by Tommy Johnson, well-known local pianist and radio broadcaster. Directly opposite the cinema were four large terraced houses and Hill’s Garage.

At the junction with Bridge Street was Reid’s cake shop. The entrance to the shop was by means of several steps which as kids we liked to play on, to Mr Reid’s displeasure. Pearson’s, the grocer was next door.I remember the times I was sent for 6d bacon bones which made excellent meals.

An open space came next before Ashton’s sweet shop which came out into the High Street, making the road narrow at this point. I seem to remember, on the side of the building, advertising signs and a sign stating ‘191 miles to London’.

A large detached house came next occupied by the Woodwards. Mr Woodward was a joiner and had workshops at the rear.
Beyond this was the Parish Church, Tennis Club and Comrade’s Field ( now known as Church Field). The entrance was a cinder path alongside the Church Hall. This track also led to the long hut known as the Comrade’s Hut. Various organisations used the hut for meetings, including the Forces (teas and snacks) stationed at Leighton Hotel and Ashfield Hall buildings.

An annual sports day was held on the Comrade’s Field: Neston C of E School [Liverpool Road], Neston Council School [Burton Road] and Ness Holt School competing against each other for a shield.

I remember the Horse Show although my main recollection is the local Council shire horses bedecked with ribbons and brasses. The bins were emptied into carts drawn by the these horses in those days.

Lots of changes have occurred in Neston since these days. For example, the large detached house which is now Evans’s Shoe Shop was occupied by the Bartley brothers’ families. One Mr Bartley used to pump the Parish Church organ on Sunday mornings and the other Mr Bartley would do it on Sunday evenings.