In the atmosphere of the Cold War and concerns about nuclear annihilation, the civilian Civil Defence Corps was launched in Britain in 1949. September 1951 saw the first meeting of Neston’s own Civil Defence Corps with nine volunteers ready to embark on training. Cheshire County Council was the responsible authority.

On Park Street, just behind the Methodist Church stood the old Court House and Police Station, built in the 1840s and not used by the Police since their new building was erected on Hinderton Road in the late 1930s. In the war years the old Park Street building had been used by the Air Raid Precautions units and by 1955 it was in a poor state and suffered from dry rot. The old cells were on the ground floor and stored old black-out material, but the first floor provided a useful base for the Civil Defence at £1 per year rent. New gas fires, tables and chairs, cups and saucers and a gas ring were ordered, and a flag pole was organised.

The formal opening was on 25th May 1957, with Councillor Bill Howe as Chairman of the Council and distinguished guests including Freda Viscountess Leverhulme of Westwood Grange, representing the WVS. The photo shows those two, and Clerk to the Council Frank Poole, and A. W. Fletcher, of Wood Lane Head Warden. His wife was Centre Organiser. 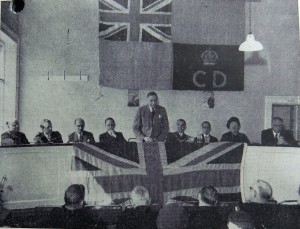 Weekly meetings and occasional joint events with other units kept the Corps busy. An Exercise “Wirral” in July 1954 had involved units of the Experimental Mobile Column from Seaforth being met by a guide from Neston Council at the junction of Boathouse Lane and the High Road, being led to the Town Hall where the Post Controller would despatch them to Neston Cottage Hospital where many casualties were supposedly trapped; their next job was a similar occurrence on Buggen Lane, and then Boathouse café.

Councillor Albert Tilley chaired a special performance of the film “The Hydrogen Bomb” in the Institute in November 1956; this jolly film can be viewed on YouTube. 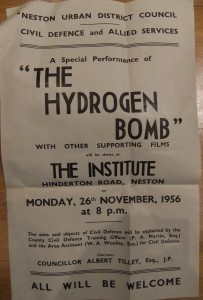 In early October 1960, there was an Exercise “Deeside”, using the Institute, Council Yard and Town Hall car-park; Mr Wallis, of the Fairground, Raby Road was asked to ensure space for the parking of CD vehicles – was the Fair a permanent fixture?

The County Civil Defence Rally the following year held at Hooton Park offered lots of scope for competition in the care of the Homeless, Emergency Feeding, Wardens and HQ ; the HQ Section team (Intelligence and Operations Sub-section) were trophy winners though the Neston ladies were unsuccessful in the arduous emergency feeding competition, which consisted of preparation and service of a tea meal of hot-dogs, buttered scones, fruit pie and tea. A soyer boiler (an enclosed drum with a heating source below it )and improvised equipment were to be utilised for cooking.

Attracting new volunteers was an on-going problem, and displays and demonstration of vehicles were often held. Councillor H.Stevenson, Chairman of the Council’s CD Committee in 1960 wrote to everyone in the town inviting them to a talk and exhibition of training equipment in the Town Hall. He pointed out that:

‘There are many people under the impression that Civil Defence is a waste of time and that nothing could be done in the event of a nuclear attack on this country. This is not true. There would be millions of survivors, many of them trapped, injured and homeless in each area of attack and along the path of radiological fallout’

On a Tuesday evening in July 1963, Exercise “Shrimp” was held here, to practice ‘deployment routing’ with the Chester City Corps. This involved lots of instructions about Sector, Warden and Control Post but was simply about the technique of briefing rather than dealing with any actual incidents or casualties.

The annual November Recruiting Parade of that year consisted of six ambulances, operations, rescue and signal vehicles. A couple of months later the Neston HQ (Intelligence & Operations Sub-section) were winners at the County Rally. 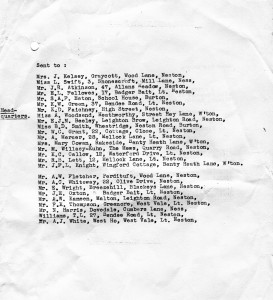 July 1964 saw plans for a CD Training Centre in a demountable building  by the Police Station on Hinderton Road, the Old Police Station on Park Street becoming totally unfit for purpose. The Air Training Corps and the WVS were also using the old building, but by November ’65 it was being boarded up, the main staircase was unsafe and slates had blown off in a recent gale. The Methodist Church considered buying it to demolish and use for a car-park but decided it would be too big an outlay. A certain local carpet company considered it for storage and officers, but eventually Neston UDC purchased the site and plans for demolishing proceeded in 1966.

By 1968 the Government had decided that a voluntary Civil Defence Corps was no longer a practicable idea, and a stand down was announced. 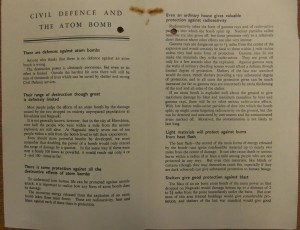