Reminiscences of a Train Boy

I started at Calday Grange Grammar School in September 1955 and we took the 8.25am train from Neston South (the present station in Raby Road then being called Neston North). Neston South has of course been long demolished and replaced by an extension of the Mellock Estate. The station and platform were very like those still standing at Hadlow Road, Willaston. 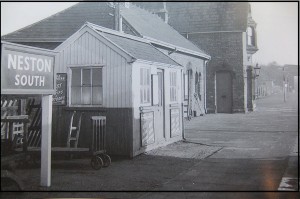 The school train had separate through compartments (as in Harry Potter films!), so there were no corridors and we had to get in the correct door. We were divided up so that each compartment had about 6 or 7 boys, one from each age level, and a sixth-former was in charge. This, probably deliberately, prevented mixing with classmates.

Sounds fine, but before I started I was terrified because there were scary stories of bullying in the compartments and the sixth former in charge of mine was reputedly the worst sadist! In fact, I kept quiet and unobtrusive and nothing happened to me at all. I really enjoyed the morning trip to Calday and hanging out of the windows (horribly dangerous by modern H&S standards), which often caused soot and even flying hot ash to catch the face. It was a special skill to be able to stretch out far enough to pass somebody’s satchel to the next compartment, and so along the train.

The journey took just over 20 minutes and we had names for all the stations: Heswall was “Yowler”, Thurstaston was “Thurgo” and West Kirby “Wekka”. Strangely, when we moved to the buses a year later, all these names disappeared, as if they only belonged to the railway.

Although it was officially a scheduled train, I don’t remember it ever stopping at Yowler or Thurgo, probably because passenger numbers were in serious decline. We got off at the stop after Caldy village onto a single platform at Kirby Park, next to the Ring o’ Bells (where our maths master was said to spend most of his evenings). It was only a halt, but the platform’s remains can still be found in the undergrowth on the Wirral Way. Then we had to climb Caldy Hill – a steep mile trek in all weather over the rocks, and it kept us fitter than any sport. I soon found that being a “train boy” was a wonderful excuse for being late in class.

After school we did it in reverse and ran helter skelter down the hill. Minutes before the 4.27pm train arrived at the Kirby Park halt a scheduled bus would go over the railway bridge, roughly coinciding with the appearance of the train’s smoke, and the cry of  “bus!” would go back along the stream of running boys to warn laggards that the train was imminent. If missed, either we had to climb back up the hill for a bus, or walk all the way into West Kirby for a much later regular train – but that had corridors and much more opportunity for mischief. 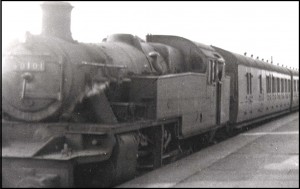 One of the last trains on the line (David Scott collection)

The school train ran until the very end. In mid-September 1956 the axe fell and the line was closed to passengers (for goods trains it continued a few more years). It was very sad moving to the buses, which seemed boring and, worse still, meant we had to get up 15 minutes earlier. But I’m really proud to have been a “train boy”, if only for a year. Now I’m living just 100 yards from the Wirral Way, and sometimes at night in bed I swear I can hear the chuff chuff of the old train rumbling past…….

N.B. The school is Calday, the village Caldy, I never found out why.

The author wishes to thank Peter Rossiter (another Train Boy) for additional information.

(I have added the image top right from Merseyside Railway History Group’s ‘Railway Stations of Wirral’ published by Ian & Marilyn Boumphrey;  the extract from Bradshaw is from web-site ‘www.disused-stations.org.uk’ with thanks  – Editor)

The image at the top of the page shows Neston South, probably around 1950; note the train passing over the Station Road bridge on its way to Neston North on the Wrexham – Bidston line;  David Scott collection.

See also Jack Cox’s memories of the same journey some years earlier in Memories of an earlier train boy.