On the 11th November 1918 the Armistice was signed and, after four years,  fighting ceased at 11 am on that day. It came too late however for Private Joseph Downes of Liverpool Road in Neston. He had been in France only five weeks when he was killed on the 23rd October. The Armistice brought the fighting to an end but the Treaty of Versaillies which officially ended the war was not signed until 28th June 1919. Before the army was demobilised another Neston man, Private Benjamin Hughes of Bridge Street, died in France of pneumonia on the 18th November. He had only recently returned to France after recovering from wounds sustained at the Battle of Arras.

The response at the Front to the signing of the Armistice was reportedly somewhat muted but for those at home it was the occasion of national celebrations and Neston was no exception; the town was decorated with bunting, the church bells rang and a service was held in the local church. By December, even before the Peace treaty had been agreed, there were already discussions on how to honour the memory of the men who had died. A meeting of Church people was held in the Neston Town Hall, organised by the Vicar, Rev Brook Gwynne to discuss how it might best be done. The Rev Gwynne declared at the outset that he would make no suggestions himself but would support whichever option was favoured by the people of Neston. At this initial meeting it was suggested that the Parish church was best site for a permanent memorial although it was pointed out that a memorial chapel would require structural (and expensive) alterations to the building. Other suggestions included the provision of a Church institute, ideally with a field attached, or the endowment of a ward in the East where so many local men had died. In the end a committee was appointed to consider the options and to report on them. It consisted of members of the Local Board Finance Committee of Neston Urban District Council, with the addition of Mr Beausire, Mr Rimmer, Mr Powell and Mr Moyes. As a result of these deliberations the names of those Neston men who lost their lives are commemorated at the Parish Church and in what is now the United Reform Church in Parkgate Road.

The Parish Church of St Mary and St Helen – the Cross

On Sunday the 29th August 1920 a sandstone cross outside the Church was dedicated by the Dean of Chester.

Parish Church of St Mary and St Helen – War Memorial Window
Inside the church a window in the Arts and Crafts style in the North Aisle showing St George on the left and St Michael on the right was made by Williams, Gamon and Co. to a design by Bernard Rice. Inscriptions were by Liverpool sculptor Herbert Tyson Smith.

Below the window is the inscription-

Gilbert Percival Gamon of Williams, Gamon and Co was the uncle of Captain Sydney Percival Gamon whose name appears on the list inscribed on each side of the window. 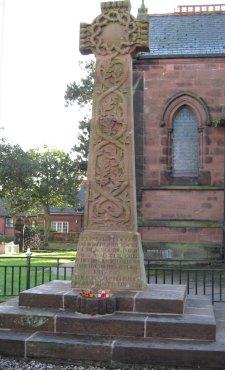 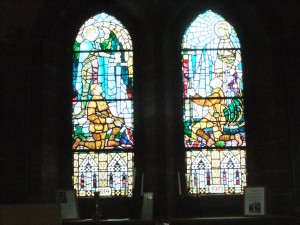 During World War War 1 the building which is now Neston Civic Hall served as the Red Cross Military Hospital and after its closure in 1919 it was decided to use the money which still remained to provide a memorial in the form of a local hospital.
Dee View, a house near the Green in Little Neston was bought for this purpose. It was formerly the home of local builder William Pritchard who built it for his own use in the 1880s. The hospital was opened by Lord Leverhulme on 16th June 1920.

More than eighty-nine former pupils of Mostyn House School at Parkgate were killed during the war and in August 1919 the then headmaster, Algernon Grenfell, decided that a memorial to them at the school should take the form of a carillon to be housed in an open belfry with chamber beneath for the bell player. He drew up the plans which were submitted to Neston and Parkgate Urban District Council. Amongst those subscribing towards the cost was the brother of Allen Appleby Drew who had been a pupil and later teacher at the school before the war. 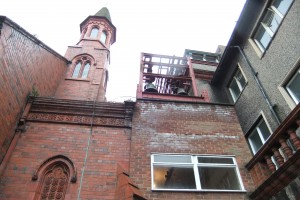 The bells were made by John Taylor and Co, a Loughborough bell foundry which is still in business today. The carillon consisted of rows of stationary bells struck by clappers connected by wires to batons or pedals on the clavier below. The batons are struck with the fist and the foot activated pedals work the larger bells.
Work was finished on the carillon of thirty-one bells in the summer holidays of 1921. The old chapel bell went to the Newfoundland church of Algernon Grenfell’s brother, Wilfred Grenfell. On 25th May 1922 the memorial was dedicated by the Bishop of Chester to the memory of those ‘who fell fighting for England in the Great War.’ A panel in the chapel entrance listed those who died.

A covenant in the deed of gift for the memorial stipulated that if the school were to close the carillon should go to another school, preferably Charterhouse. When the School closed in 2010 the bells were offered to Charterhouse who accepted the donation and with financial contributions from the Mostyn House Griffin Project, the Carthusian Trust and John Taylor and Co Ltd of Loughborough (the company which first made the bells) the carillon was installed in the original Charterhouse Chapel. The service of rededication took place on 22nd May 2014, the centenary year of the start of the war

Although not strictly speaking a war memorial Comrades Field remains as a reminder of all the Neston men who served in the First World. The adjustment to civilian life even for those who were fortunate enough to escape physical injury cannot have been an easy one and one of the organisations established to support returning servicemen was the Comrades of the Great War. A Neston post of the organization was established with financial support from Colonel Eustace Harrison of Denna Hall who also provided them with a hut on the field next to the Church. When the he sold the field to the Church in 1919 it continued to be used by the Comrades as a football field.