A July wedding, 1848 – and the whole of Neston celebrates.

The wedding in question was that of Nessie Monk Bankes and local doctor, James Braid, M.D.,The wedding took place in the Parish Church on 6th July 1848.

Nessie Monk Banks was the daughter of Arabella Bank(e)s (1788-1875) and her husband, Neston doctor, John Wharton Bankes (1798-1847). Arabella Bankes was born Arabella Monk, the daughter of Parkgate Customs Officer, William Monk and she was one of the original members of the Neston Female Friendly Society. They were married on 22nd December 1825 in Neston. Nessie was their oldest child and the only one to survive to adulthood. She was born on 2rd April 1827, her brother James Roger on 8th July 1828 and her sister Arabella Annie on 27th May 1831. All three were baptized on the same day on 21st April 1837.

In 1841 when her parents and siblings were living in the High Street in Neston she was a boarder at school in Leighton. By 1845 both siblings had died, Arabella Annie in April 1845 and her brother James in November, 1844. Her father, John Wharton Bankes, died in 1847 and was buried in Neston on 18th December. In July the following year Nessie married Dr James Braid who had taken over her father’s practice.

James Braid (1823-1892)
James Braid was born in Scotland in 1823, the son of surgeon James Braid and his wife, Margaret. In 1841 he was living with his parents and sister in Piccadilly, Manchester. His father was an eminent surgeon but is now best remembered for his pioneering investigations into the nature and uses of hypnotism. He followed his father into the medical profession though as a G.P rather than a surgeon. He took over Dr Bankes practice when he died in 1847 and in the following year married Nessie Bankes on 6th July 1848.

Neston Celebrates.
After the wedding the couple had a trip to Scotland and when they returned on 24th July festivities to celebrate the event were in full swing. The Chester Chronicle described the events of the day, organized by a local committee and involving, according the reporter, over 2000 residents and most of the local inns.

Chester Chronicle – Friday 28 July 1848
Festivities at Neston.—The clean and neat little town of Neston was very much enlivened on Monday last, on receiving Dr. Braid after his wedding trip from Scotland, who bad joined in the silken banns of wedlock Miss Banks only child the late and well-respected J. W. Banks Esq, surgeon. The day was ushered in by a splendid band from Liverpool, playing through the different parts the town, which was responded to by a merry peal of bells. The amusements commenced at four o’clock, when upward of fifty good old English women were refreshed with that wholesome beverage – “tea,” which was sumptuously 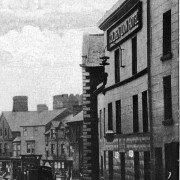 served by mine host from the Black Bull, Mrs. Henshaw a characteristic for which the worthy landlady much noted, the band playing during the time (which was beautifully brought up in a car very tastefully dressed, in which were a lot fat sheep, afterwards cut up and given to the poor) several lively airs, such as—” Polly pot the kettle on-—”Haste to tbe Wedding” –“The girl I left behind me “—“oh, Nanny, wift thou gang with me”- “ A health to the Queen,- and several others.

At the close of this proceeding, forty-five of the gentlemen and tradesmen proceeded to the worthy hostess of the Nag’s Head, Mrs. Norman, a house welt-noted for good eating and drinking where entertainment was amply provided in good old English style. After paying all due honours to the wedded pair, both in toast and sentiment, the party all mounted horseback, joined by a tremendous crowd of spectators, to meet the happy couple on their arrival, when they took the horses from the carriage and drew them in, the band playing in front – “See the conquering hero comes”.- The Bride was handed from the carriage by her worthy uncle Joseph Monk, Esq, amidst upwards of 2000 of her neighbors, who received her with long and loud vociferations. When she mounted the step to the door, she appeared in all the lovely charms or health and beauty, and most gracefully responded, after which the doctor visited the dinner to acknowledge the compliments.

There were likewise seven open houses in the town, amongst which we noticed our worthy landlord of Golden Lion, who did not forget to shew himself as on all other public occasions; and we should be very remiss were not notice the committee whose able management added to the order the day- they were Mr. Thomas Jones, Mr. William Meacock, Mr. Joseph Jones, and Mr. Thomas Parry (the indefatigable exertions of the latter were beyond all praise). The evening’s amusements concluded in tripping the light fantastic toe. Dancing was kept up until a late hour, when all the company separated that unanimous, good, sympathizing feeling so justly due to her worthy mother.

Married Life
After their marriage they lived at Springfield in Church Lane and Nessie’s mother Arabella lived with them. Their first child James Bankes Braid was baptized on 2nd August 1849 but survived only a few months. Their second son, Charles Braid was born the following year and was baptized on 30th September 1850. Just before his third birthday his brother John Wharton Bankes Braid was born and baptized in Neston on 2nd September 1853. Sadly, this happy event was followed by the death of both his mother and younger brother; Nessie Braid died on the 5th May and her son, John just a few days later on the 10th May. They were buried on the same day in Neston on 12th May 1854. Nessie was 27 years old.

Afterwards.
A few years after Nessie’s death Dr Braid married again; his new wife was Lucy Jane Reade from Congleton. They were married at Walton on the Hill on 4th September 1856. They went on to have at least nine children, eventually moving to Sussex sometime during the 1860s. In 1861 however they were still at Springfield, Church Lane in Neston. Also living there was James Braid’s cousin, Dr David Russell who was a partner in the practice. When James’ father, James Braid senior, died in Manchester in 1860 he was buried at Neston Parish church. Nessie’s son Charles was a boarder at a school in Parkgate in 1861 whilst her mother, Arabella, had moved to Parkgate Road where she lived with her brother, Nessie’s uncle, Charles Monk.

James Braid died suddenly on 12th November 1882 at the age of 60 at his home, Lawnswood in Burgess Hill, Surrey.

This respected practitioner died somewhat suddenly on Wednesday, after an illness of only three days, occasioned, we understand, through a chill caught whilst visiting the Olde Englyshe Fancy Fair at the Brighton Dome on the previous Saturday. Deceased, who was sixty years of age, was the son of the late Dr Braid of Manchester, and the lamented doctor had been a popular practitioner in Burgess Hill and neighbourhood for the last 20 years, enjoying the esteem and confidence of all classes. Held the diplomas of M.D., M.R.C.S., E., and L. S. A. The deceased leaves three sons- the eldest of whom, Dr Charles has for some years assisted his father in the practice.

His funeral was attended by upwards of 1000 people. Amongst the pall bearers was Dr Russell. A memorial window in the church of St John the Evangelist was provided from local subscriptions.

Charles Braid entered the medical profession, the only one of James Braid’s sons to do so; one of his half-brothers became an engineer while the other went entered the army. He died in March 1897 at the early age of 42 at Ivydene Dorking in Surrey.

Mid Sussex Times – Tuesday 16 March 1897
Mr, Charles Braid, M. B., eldest son of the late Mr. James Braid, M.D., of this town, died on Wednesday at his residence, Ivydene, Dorking. The deceased, who practised in Burgess Hill for some years after his father’s death, but left the town three or four years ago, was a member of the Oakenden Lodge of Freemasons, which has its headquarters at Cuckfield. He was formerly Medical Officer for the local Poor Law district.