The Brown Horse, an introduction:

The current Brown Horse was built between 1850 and 1875. The land in that area had been held by the Wolstenholme family for over a century when we find the first actual mention of the Brown Horse, owner Henry Wolstenholme, in 1849. That was still an old building that also had a yard, shippons, a barn, and a cart shed and four old cottages on Snig Lane, the site of the present Brook Street cottages. In 1820 the farm had over twenty cattle and a quantity of dairy and cheese-making equipment. (It would be interesting to see if the cellars of the pub appear older than the 19th century building.)

The block north of the present Brown Horse building, (former Ethel Austin/charity shop etc) started as two three-storey houses around the 1730s and has been extended by three single units as far as the former Cheshire Building Society.

The Wolstenholme family also owned these and they were active in various spheres in the town; one ran the Leighton Beerhouse, one was a cheese factor, another a draper and later in the century there was a Henry Wolstenholme surgeon on this site, by which time it had been made into two shops (as now). In 1856 the Inn was offered for sale. In 1873 a Mr Brayne, then licensee and tenant of the Brown Horse sold the good will and fixtures to Mr Thomas Anyon. Later a Mr John Scott was the tenant until his sudden death in 1883 when his wife, Rosina Scott, took over the running of the pub. She retired in 1892 because of ill health and moved to Liverpool where she died three years later at the age of 51. 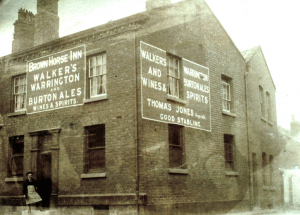 Walkers, the brewers, bought the pub in 1892. Walkers then leased it to Daniel Broster. He was succeeded by Thomas Wilkins and at the turn of the century the landlord was a Mr Stephanus Nixon and at some point after this the landlord was Thomas Jones.
The tenant from the 1920s until 1966 was Reg Stevens, and local historian, Clive Edwards of Burton and Neston History Society provides the following record of life in the Brown Horse and in Neston during this time based on his conversation with Reg’s daughter, Jill Smith.

Growing up in the Brown Horse Public House, Neston

By Clive Edwards, from notes and conversations with Jill Smith in 2008.

Jill tells that she grew up with her two sisters and parents in the Brown Horse Public House, which is on the Cross in Neston. The family had a private entrance into the pub and the girls did not see much of the customers. Once when Jill was a little girl, the cleaner was tiding up the pub and Jill helped herself to some egg flip. She was seen wobbling past Irwins on the way to Burton Road School and after half a day was taken home. She was not allowed to help at the bar, but did help with sorting out the takings ready for banking, which were taken to the Midland Bank. This bank was then situated in what is now the Post Office half of the Town Hall building. Living here in a flat above the pub, they had a view of life and people around the Cross.

Looking out to the left, from the upstairs living room window across Brook Street, was Irwins, the grocers, now Tescos. On Sunday evenings there was a group at Irwin’s corner, singing hymns to a small organ and speaking, trying to convert the listening and passing people. From this window there was a view all the way to Little Neston and they could see their Uncle and Aunt’s house, ‘Stone Bank’ in Lees Lane. They could even see the white sheets bobbing on the washing line. Since then housing around Mellock Lane has obscured the view.

Buses bound for Chester used to stop outside Irwins in the High Street and buses going down to Parkgate stopped actually on the Cross (then in its present position), and people used to stand on the other side for buses going to Birkenhead. Double deckers then continued down Parkgate Road to Parkgate. On the other corner of Parkgate Road and the High Street, queues formed outside the White Horse on Saturdays of people going to ‘town’, Liverpool. The sisters could peep out of the window, while finishing their make up and preparations and run out when the bus arrived, in time to catch it, after the queue had been issued with their tickets. The sisters’ father was Reg Stephens, who was the tenant landlord at the Brown Horse for over 40 years. He had been brought up in Liverpool and knew the musical Goosens family and had been to their home. He was an only child and from a connection on his mother’s side eventually got into the pub business. 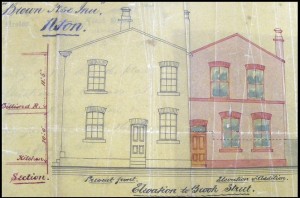 Aged 17 he went into the army in 1915 for four years. In the early 1920s he worked for about three years in Iquique, in Chile, as a statistician for Lockett Bros & Co, a nitrates company, before returning to the UK for family reasons. In the Second World War he doubled up in a munitions factory and later switched to helping with the Swifts’ fields off Boathouse Lane. He was also in the Home Guard from 1940 to 1944. During this period, his wife helped in the evenings and a Mrs Anyon helped to run the pub in the daytime. Mrs Anyon came from Little Neston on a sit up and beg bicycle. Their mother was ‘Dolly’ nee Swift and her father Charlie was a farmer and butcher. His shop was the Swifts’ shop that was until about the 1980s on the Parkgate Parade. The Brown Horse was a Walkers pub and the beer came from their brewery in Warrington. The pub had a darts team and a billiard table. The ‘Buffs’, the Buffaloes held meetings in the pub. It was kept sparklingly clean and there were lots of flowers on display. Reg was well read and educated and some customers called in after work for a chat and a drink. The family had a TV early on, supplied by ‘electrics’ Mr Cameron and for special events it was carried down to the bar. If your TV broke down, Camerons would often exchange it for another one. There were always friends, relatives and others calling. This was especially the case on Ladies’ Club day.

After Christmas, this was the highlight of the year for the children. On Christmas Day a tramp Soloman ‘Sol’ was given his lunch in the bar, after closing time. On Boxing Day, Reg provided free beef sandwiches for the customers, and their numbers increased! The town then had other tramps. Tim had his coat tied with string and carried a short stick. Blossom, a short fat man, had a growth like a golf ball on his face and lived in an outbuilding by the present site of the Servite flats. The pub had a rock tunnel, which joined two cellars. In the Second World War, the sisters and family used to shelter in the tunnel during air raids. There were beds in the cellar and the girls went down through the bar in their dressing gowns. Reg and Dolly were friendly with some Americans, who were based at Clatterbridge Hospital and HMS Mersey. They came for supper and after the war, the Stephens wrote to their families and kept in touch for many years. Jill did an embroidery of the British Isles and sent it to the American family. One was a sailor called Bruce who came from Salem, near Boston, Mass., where one of Jill’s sons now lives. 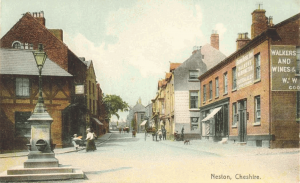 For the VE celebrations, there was a search light from the front of the pub, which shone a light dancing around the Cross, and there were huge USA flags, provided by the council. The sisters knew all the shopkeepers, many of whom were childless couples. Many of the traders and shopkeepers lived ‘over the shop’. Shops in Neston included a cake shop (later ‘Shand’) run by Mr and Mrs Atkinson. He did the baking and always cooked the pub’s Christmas turkey. The confectioner there was Elsie Bostock, the late mother of Maurice Rigby, the barber. In what is now Help the Aged was Morgan’s car show room and they sold petrol from a pump on High Street and the pipe would be used extending across the pavement. Car repairs were done at the rear in what is now a warehouse for Gittins carpets. Nichols Dairy shop was in Brook Street on the site of Tesco’s car park, with a field for the horses, which pulled the milk floats for deliveries.

After the war vehicles were used instead of horses. Mr and Mrs Robinson sold wools etc and toys in a shop in Chester Road, now an animal charity shop (in 2008). Where now (2008) is the Halifax Building Society, a Jack Williams and his wife sold linens, clothing and shoes etc. He wore white pumps and had a snorting manner of speech. In the Tower building, the Miss Halls had cake and catering shop. Miss Albans sold sweets, where now is Guy Payne, accountant. Rostances sold clothing, wool and haberdashery in the shop now Martins the Newsagents. Molly Roscoe, not a pretty woman, sold fish from a box on wheels, on the street. There has within memory always been a fish and chip shop next door to the White Horse. Jill heard that the White Horse may have lost its licence in an unsuccessful attempt to enable one to be transferred to Burton. The pub had one of the early telephones, number NESTON 52. It was not very convenient, as customers had to take any incoming calls in the family living room. A phone was then installed in a cupboard downstairs, but some people abused it and made free calls, so it was removed.

There was no off-licence in the town then and the pub had an Outdoor Department. Some folk too ‘posh’ to come to the pub, would phone for a bottle of spirits or sherry to be delivered. Reg had to work in the pub both mornings and evenings until 11pm and was therefore tired and tried to get a rest in the afternoons and would play golf on his day off and most weeks went to the first house at the New Cinema. He was a weekly member of Heswall Golf Club and before the war refereed boxing at Mostyn House School. He died in 1966, still publican of the Brown Horse.

Plan for the 1860s alterations, the red parts are proposed new additions.