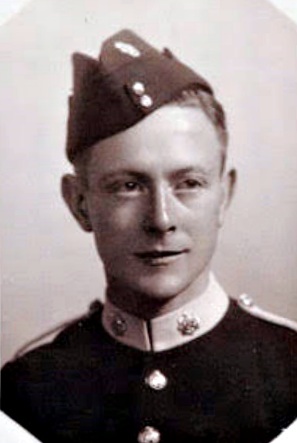 George Edward Pearson was born 11th July 1915 in Neston, the son of George Pearson and his wife Susie (nee Chrimes).  He worked with his father in the family grocery business started by his grandfather, John Pearson, in Bridge Street, Neston.

As a Territorial he was mobilised at the beginning of the war and was serving as a Sergeant in the Royal Army Service Corps when he was sent to the Middle East in February 1941.  Two months later he was taken prisoner in Mechili, Libya

He was sent to Italy but eventually escaped, and finally reached Switzerland in November 1943.

His wife, Kal (Kathleen), was working at the NAAFI Headquarters in Burton and his father, who had served in the First World War, was a member of the Home Guard.

Ted was mentioned  in despatches in the London Gazette on 18th April 1946 for distinguished service.

Before his death in 2003 he wrote a detailed account of his escape and his  journey to safety in Switzerland – please click below to read his memoir.