Susan Chambers
This weekend, a century ago, was not the Bank Holiday; that was still celebrated on the first weekend in August. Many local men had by this stage been killed in action and some of them were being remembered this week in 1917.

The Third Battle of Ypres, better known as Passchendaele, which started at the end of July, was causing thousands of casualties and many of them were ending up in our two hospitals. On the previous Monday yet another hospital train had pulled into Birkenhead Woodside Station and its patients allocated to various Wirral hospitals, including twenty to the Red Cross hospital established in the Institute, and twenty to the one on Parkgate Parade. The numbers of Neston VAD ambulance men who regularly helped with patient transport were getting depleted as they were being called off to war themselves and help was desperately needed.

Some of the patients and staff attended the Parish Church on Sunday to remember one of Neston’s own, 19 year-old Private George Anyon of the 10th Cheshires, who had only been in France for a few weeks. He had been employed at the station on the Wrexham line, and his father was care-taker at Burton Road schools. Handel’s funeral march from Saul had been played on the church organ. 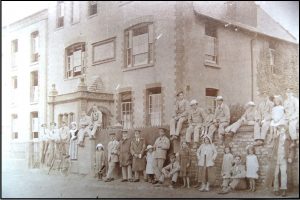 Another local man, Sergeant Major Samuel Dudderidge of Liverpool Road, a former employee of Lever Bros was reported killed in action. He had enrolled in the Cheshire Regiment and gained rapid promotion and was awarded the Military Medal for conspicuous bravery in the battle-field.

On Friday the body of a lady who had moved to Plymouth was brought back for burial in the grave of her late husband, Rev. Frederick Davies, Royal Navy chaplain; Mrs Davies was a relative of Aubrey Thomas, a distinguished architect who had built and lived in Bleak House (called Brook House later). (See our Facebook mention of the house recently). 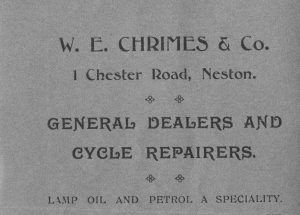 Another death was that of Mr Edward Chrimes, of Gladstone Road, who had been a cycle dealer and ironmonger in the town for 20 years and also established a motor garage and workshop. In his early 50s, he had been struck down by illness which a trip to Buxton had not cured. Mr Chrimes (whose son took on the business) was a popular local figure and a member of the Shepherds Club in Neston, a male sickness and benefit friendly society so the Shepherds carried their crooks draped in black, and formed an arch for the coffin entering church. Many familiar local names attended including some who were serving soldiers, his son Pte. C. Chrimes, Pte. George Pearson, son-in-law, Pte. H.F.Chrimes, nephew.

One cheerful event had been the C of E Sunday School Treat on Saturday for 300 children from Neston, Ness Hoult and Parkgate. The children were taken in various vehicles to the Liverpool Road school for a beautiful tea, then to a local field for games and sports organised by the clergy and day and Sunday school teachers. Every child had a prize and a bun to take home.

Rev. J. Towert from the Presbyterian Church (URC) organised an evening’s entertainment for the convalescing soldiers, with performances of such classics as ‘Gunga Din’, ‘The Sunshine of Your Smile’, ‘The Sailor’s Grave’ and ‘Skin of a Spanish Onion’ with many performances from the men themselves, always glad to join in.