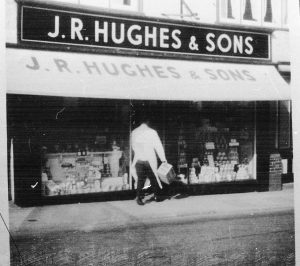 Heavy thunderstorms threatened the local harvest a hundred years ago this week, wrecking the standing corn and fruit on the trees and there was a worry that  heavy rain was liable to damage the second early potatoes.

Food shortages were a serious problem at this time in the war, and there had been a severe sugar shortage for months, accompanied by rumours of unfair distribution, but a ‘sugar card’ system of rationing  was being brought in,  and the grocers were busy advertising that stocks were available.  Butchers were now being obliged to erect clear  signs giving the price of all their meat.

One well known local grocer was J.R.Hughes (HSBC site); he had been conductor of Neston Male Voice Choir but was this week performing at the Birkenhead Eisteddfod with the Welsh Choral Union from Liverpool.

Residents were warned to be vigilant about obscuring lighting, now the nights were drawing in.  No Zeppelins had been seen for a while (and there had been none in this area)  but there was still a threat from enemy aircraft and vessels on the Dee.

The  Council allowed Mr Grenfell of Mostyn House temporary permission to have his landing stage and breakwater protection. Discussions on housing resulted in agreement that 100 new houses would be needed at the end of the war because of demolition of many unfit properties, and the number of soldiers that would be returning.

Private W.Tozer was in hospital in France, wounded when he was buried in a shell explosion, though not seriously.

A wedding in the Parish Church took place between Emily, daughter of Sapper Joseph Mealor of Chester Road, and Lance-Corporal Thomas Brown of the 1st Irish Rifles, who had been an inmate of the Red Cross hospital in the Institute. The church pathway was lined by wounded soldiers from the hospital, making an archway with their walking sticks, a nice story.

An interesting side-light on supporting the elderly was reported, when two brothers (I withhold their names) were summoned for not looking after their mother who was allowed 7 shillings  a week by the Poor Law guardians who thought the sons should contribute at least 2s 6d each. The sons’ view was that she was receiving parish relief (from the workhouse guardians) without their consent, whereas they thought she was entitled to an old age pension. This seemed as complicated as such matters might be today. The magistrates said they must contribute 2s 6deach per week.

Another court case meant a 5s fine for James Davidson as his dog was roaming the High Street without a collar. 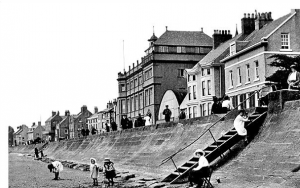 Thomas Wynne was charged with poaching on Kemp’s land at Burton with a gun.  He had given the game-keeper a false name but was spotted ten days later and when accosted by the gamekeeper, claimed he had been working down the pit on the first date mentioned.  Two witnesses he produced were not believed so it was a £2 fine.

Ness farmer Samuel Mealor was charged because he did not stop when a police constable tried to flag him down,  30s or 21 days.

Three Thornton Hough youths, aged 10-12, were charged with damaging telegraph insulators, property of the Postmaster General. Throwing stones at the porcelain insulators was a favoured occupation of youngsters at this time and the boys were fined and cautioned.

An up-coming auction sale of goods from Park View on Leighton Road was advertised; this is the grey rendered house on the right-hand side of the start of Leighton Road, from the Neston end. A vast array of high quality furniture was on offer, also an original letter from Queen Victoria at Windsor Castle and twenty £1 Neston Town Hall shares.