By the end of October the Germans were beginning to very slowly pull back from Passchendaele as the allies edged closer to the village, and in the Middle East Turks were retreating from attacks by General Allenby, while T.E. Lawrence was using his influence with local Arabs.

Meanwhile George Formby was performing live at the Argyle Theatre in Birkenhead and Charlie Chaplin was on film at the Picturedrome; Chester Music Hall had “A Munition Girl’s Romance”, which has not stood the test of time, unlike “The Lads of the Village” live at Liverpool Olympia, and the film can be seen on YouTube. 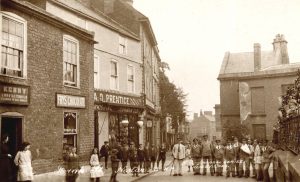 News arrived in Little Neston of the death of Private Harry Cottrell, shot by a sniper and reportedly killed instantly. Harry, 20, served in the Loyal North Lancs Regiment, having been a gardener for Sir Percy Bates at Hinderton Hall. His father John lived in Old Post Office Road in Little Neston, probably just off Town Lane opposite Ivy Farm Drive.

A rare item of good news from the war was that Harry Maylor of Victoria Road, Little Neston had been awarded the Military Medal for gallant conduct (Neston’s first). His brother Thomas had a leg amputated in May 1916 after being wounded in France, and their father, John, had died suddenly at the Munitions Works in Sandycroft in January 1916. A number of local people worked there and a Crosville bus ran from Heswall via Neston; one day this week it had crashed into a tree brought down by gales on Liverpool Road.

A big event nationally at this time of year was known as “Our Day”, when funds were raised for the Red Cross and St John’s. A general market in the Town Hall was organised, opened by the indefatigable Mrs H.N.Gladstone of Burton Manor, assisted by Mrs Pemberton (Hinderton Mount), Mrs Whineray (Leighton Court), Mrs Earle, Dr Grant, Dr Gunn and other leading lights of the town. 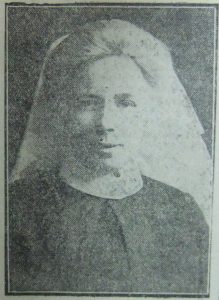 A popular stall was the White Elephant, run by Miss Pownall (Windle Hill). Mrs Whineray was in charge of the hat and blouse stall, with 180 hats, Mrs Earle ran the fruit and veg table. Artistic cushion covers made by the soldiers from the hospitals were popular, especially a dark blue linen version with the Cheshire badge in green and gold. A live-stock section included, geese, turkeys, a kitten and a rabbit, and these were auctioned by the men’s section of the Red Cross, while eight prime fat sheep and two fat pigs were being sold at Hooton Smithfield (the livestock market) on Monday. Numerous dainty little tea-tables were served by Mrs J.Mealor, T.Johnson and Miss Cabrey, whilst teas for the men from the hospitals were served in the basement drill hall.

Wounded men were regularly being brought to the two local hospitals, and many people were ready to provide entertainments; one of the local Red Cross men had written a musical farce entitled “What you like. We don’t know”, which was performed at the “Our Day” just mentioned, and on the following night to the patients. Unfortunately the script has not been conserved! A room at the library was open daily for the wounded soldiers, with a plentiful supply of books, papers and games.

The Petty Sessions in the old police station on Park Street were busy, Joseph Bartley was charged for a second time with letting his ass stray in Hinderton Road, fine 2/6. Thomas Price, 5s or six days for failing to obscure his acetylene bicycle lamp with at least one thickness of ordinary white tissue paper, and Harry Sowden was similarly charged. There was still a fear of Germans attacking from the air or the estuary, hence the care over lighting, though the fear was now diminishing – in fact the council decided it would be safe to now light another twenty-six gas street-lamps (and one oil lamp), with the Chief Constable’s permission.

There were a lot of complaints from Chester that Neston people were selling fish in the city without a licence; Robert Robinson of Badger Bait was one of them and had been selling fish and mussels in Princess Street next to Chester Market, so it cost him a 20s fine. 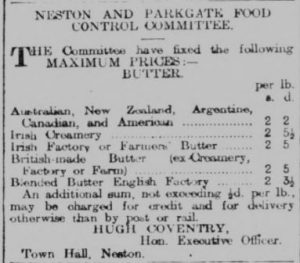 On Sunday September 30th several men from Shotton had been walking up Parkgate Road, arm in arm using obscene language, and the magistrate commented on the large number of men who came over from Shotton with its Welsh licencing laws, in order to get a drink on Sunday nights.

Food shortages were affecting much of the staple diet of the time, sugar was almost impossible to get for domestic use, though bulk stocks had been released for food preserving (jam), butter and bacon were scarce and the potato harvest was dismal because of the weather. The Board of Trade had increased the price of coal by 2/6 a ton, the miners having recently been awarded a pay rise; the collieries were under Government control, and everyone would be paying the price.

There was a meeting of the British Women’s Temperance Association on October 23rd, with a ‘fair’ attendance despite bad weather. The local membership was said to be 340, and the women were treated to a talk by Mrs Bulley from Ness, chiefly on temperance matters but reportedly witty and thrilling….reportedly.