as reported in the Cheshire Observer, Saturday, 6th June 1914

Who shall describe the joy of Neston over its great and long anticipated festal day, the hundredth anniversary of the Ladies’ Club, or, as it should be fully titled the Neston Female Friendly Society. The day was full of un-rehearsed incidents, full of charm and unbounded enthusiasm. Bunting floated out from many windows, and as Thursday morning dawned a canopy of the daintiest little flags spread over the central portion the town. Mr and Mrs Swift, of the Cross, are to be congratulated on the result, great star rainbow colours. Many other residents added their quota. People wore pouring in from early morn, visitors from neighbouring towns and villages, and by noon the street, were practically impassable. The glory of the day had gone abroad. Flag staffs were still being erected and banners hoisted, and the Town Hall entrance had its own special arrangement. Time flew There was much occupy the mind. Pedlars all descriptions and booths made bright flashes of interest. Twelve o’clock chimed, then one, and ere the hour of assembly the throngs deepened, and progress became difficult. People strained forth, as ladies came along with their floral wands to the schools. The heavens were blue. Clouds could not stay, and the sun blazed forth.

Afar off came those lovely strains ‘‘Jesu, Lover of my soul” to the tune Aberystwyth. It lulled the crowds, and was played by the Bromborough Pool Silver Band. They headed the procession, and one of their number bore for this occasion a floral staff. Immediately behind the immense staff of the lady patroness attracted attention. In accordance with custom, it carried by a boy, Master Bert Henderson, and was charmingly designed with a picturesque flower basket on the summit. 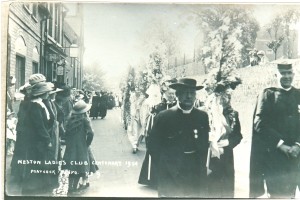 Then followed a graceful and gleaming picture. It passed all too quickly, this embodiment of colour and rare charm. All the officials walked, the clergy and doctors wearing robes, a welcome addition tothe general scene. They included the Rev. C. Brooke Gwynne. Drs Gunn, Grant and Carlisle. Canon Cogswell, Mr. Pemberton and Mr. R. s. Price, and Canon Gordon, of Winnipeg, who represented the Rev. H. Bull, Thornton Hough. – These officials led the way with the honorary members, and by the wish the committee blue and white flowers, these being the colours of the Society, were used for the decoration of the wands, streamers of silk ribbon also accorded. The deep sapphire blue was also conspicuous in the ribbon of all the medals worn the members. These were specially designed commemorate the occasion by Mr. Wharam, the secretary the society. Among the honorary members present were Miss Lyon, the Lady patroness, in purple. Mrs. Brooke-Gynne looked well in navy blue, her hat relieved with pale grey plumes; Mrs. Barrett and Mrs. Pemberton were in black, Mrs. Barber favoured sapphire blue, and Mrs. Harrison was in grey. Mrs. Mansfield wore a smart black satin toilette with cream lace, and hat relieved with white. Mrs. Gunn was becomingly attired in a deep cream and pale blue striped costume, and blue hat with plumes. Mrs. Grant and Mrs. F. Russell were in cream. Mrs. Jones (The Cottage) wore picturesque dress of green, and a black hat with white plume. Mrs. R. S. Price looked well in nary blue, and Mrs Pakenham Walsh favoured tussore. Miss Seagar was cream, and the staffs, which were exceedingly beautiful, defy description. 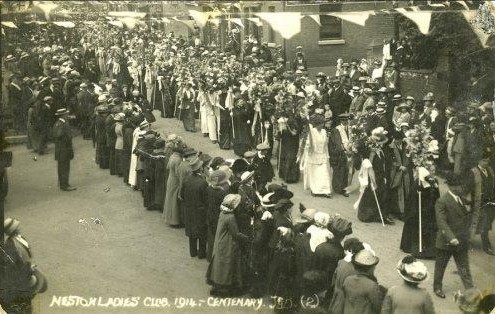 Mrs. Coventry and Miss Henderson, stewardesses of the society, led the long procession of benefit members, the dainty dresses and wands here being too numerous to mention. In the fine Parish Church a memorable service was conducted. The surpliced choir were present, and the church was packed from door to door. The sermon was preached by the Rev Canon Cogswell, the Rev. C. Brooke-Wynne conducting the prayers. In his address the speaker said 45 years ago he knew something of the glories of the Neston Ladies Club from relative the late Canon Gleadowe, but never had his liveliest imagination conjured up such scenes as he had witnessed. The service closed, and again the pro cession went forth, down through the churchyard and by a circuitous route to the Cross.

In the lane overlooking the estuary the scene was perhaps the prettiest of the whole route. Again, as the great circle enveloped the Cross, stretching far round the fountain, it was a brilliant spectacle and warmly appreciated by the spectators. Selections worn played by the band and with the final walk up High street, the processionists vanished within the Town Hall, where a free tea was provided in honour of the occasion. In the town a general effort had been made to observe the colours of the society. Blue and white was freely worn by the crowds, and shop windows were festooned with the same colours. At the business meeting the Vicar presided. The secretary (Mr. D. Wharam) read the annual report, which shewed a benefit fund at the end of 1913 of £2,046. 19s. 11d. Last year had proved heavy for sickness, but the society was in very favourable position.—A vote of thanks was passed to Canon Cogswell for his eloquent sermon.—Mr. R. L. Price and Mr. Pemberton also commented on the sound position the society.

The Town Hall was well patronised during the evening for dancing, Mrs. Coventry, Miss Henderson and Mr. Wharam superintending the proceedings

A charming incident must be related. Attention was frequently riveted upon a bath chair, containing a cheery old lady, and gently pushed by a middle-aged and a younger lady. It was allowed to remain in the middle of the fragrant circle on the Cross, for by some means the news leaked out that this was Mrs. Ann Turner, the famed keeper of Cholmondeley Lodge who was a vigorous youngster of twelve months on the birth the society. Four generations were present on the Cross and she was the cynosure of all eyes. Choice flowers were token from staffs and placed in her lap by ladies near, and in a subsequent chat, as we moved slowly through the thoroughfares, the aged dame expressed her keen delight in being present at this 100th anniversary. She is staying with her grandson at Westwood, the residence of Mrs. Johnson Houghton, and has 15 great-great-grand-children. Her daughter was justly proud of her. Asked she was tired, she became enthusiastic and remarked, “I wished to walk down, but it was a little too far. It has been very beautiful.” Her only desire was for a cup of refreshing tea, and she proceeded to relate that she peels all the potatoes her residence, feeling for holes. She was quite a character, and people surged round, shaking hands and making much of her. “Are you the dear lady of the Observer’? I’ve read all about you,” said one. “Yes, I am,” was the bright rejoinder, and she raked questions as to the relationship of some the crowd who might be known to her. A gentleman plucked rose from his coat, gave to her gripped her hand, and departed. It was so simple and pleasing.

Mrs. Youds, of High-street provided the excellent tea and the general arrangements were ably carried through by Mr. D. Wharam, the secretary. A debt of gratitude is also due to the lady patroness and the committee. The beautiful banner of the society bears the motto, “Bear ye one another’s burdens,” and this is engraved upon the commemorative medals.