When the 1911 rules were issued the Neston Female Friendly Society was nearly one hundred years old. Although there is a reference in a Birkenhead News Report in 1926 to an earlier set of rules in dated 1825 (then Secretary, Dick Wharam mentions them at the annual meeting) the only records of the rules governing the Society in the first hundred years of its history are those of 1817 and 1911.

When the 1793 Act was passed there was some suspicion that Friendly Societies might become a vehicle for revolutionary activity or trade union action, although at the same time it was recognised that they also reduced the cost of providing parish relief under the existing Poor Law provision. In order to ensure that the activities of a society were lawful they were required to register them with a local Justice of the Peace which the Neston Female Friendly Society did in 1817. In the years that followed these concerns grew less and much of the legislation that followed was concerned with protecting the interests of members by ensuring that they were financially sound and well managed.

The next major Act of 1819 was passed for “the further protection and encouragement” of Friendly Societies and to prevent “frauds and abuses therein” and it attempted to ensure that the Societies were financially able to deliver the benefits that they proposed. Following a report in 1825 by a select committee of the House of Commons the law relating to the Societies was completely reconstructed in the Act of 1829 and responsibility for inspecting their rules was removed from the Justices of the Peace and a barrister was appointed to examine the rules of societies. The barrister  was John Tidd Pratt (1797-1870). An act of 1846 made this barrister the Registrar of Friendly Societies. When John Tidd Pratt died in 1870 a Royal Commission was appointed to examine existing legislation. The Friendly Societies Act of 1875 which followed required Societies to audit their accounts annually, to submit returns to the Registrar annually and to provide a valuation of the Society’s assets every five years. This Act and the amendments which followed it were consolidated into the Act of 1895 which was in force when the Neston Female Friendly Society’s rules of 1911 were issued.

The benefits provided by Friendly Societies were beginning to be taken over by the State. The Old Age Pensions Act of 1908 provided a (minimal) non-contributory but means tested pension to those over the age of 70 provided that they were of good character and had not refused to work. A National Insurance Act had just been introduced in 1911 which provided benefits for during periods of sickness and unemployment.

The 1911 rules reflect these changes in legislation. The Society appointed the following officers: three Trustees, a Treasurer, a Secretary, two Auditors, six Stewardess of which two should be Honorary Members. The rules also required a Committee of Management composed of the Lady Patroness, the Treasurer and the six Stewardesses. and make provision for the appointment of auditors each year. The officers in 1911 were:-

The Secretary was required to ensure that the annual returns to the Registrar were made and to attend all meetings of the Committee of Management.

The payments and benefits were much as they were when the Society was first established, showing only a slight increase. The number of members in receipt of the old age benefit was limited to six at any one time though elderly members often received sickness benefit instead. Members were now longer required to make an additional paymenton the death of one of the members, and fines for unruly behaviour at meetings and  for attending (or not attending) the annual meeting had been abandoned. The regulations also covered the dance after the annual meeting and although any takings were to be paid into funds it was not to be funded by the Society.

Members did however make a quarterly payment in addition to their monthly subscriptions to pay the Society’s doctors. At the time the rules were published the Medical Officers were : Lewis Grant, M.A., M.D.   H. G. Carlisle, M.D. and G. Gunn, M.D., F.R.C.S (EDIN.).

Complete text of the rules below (Images provided by Geoff Wright) 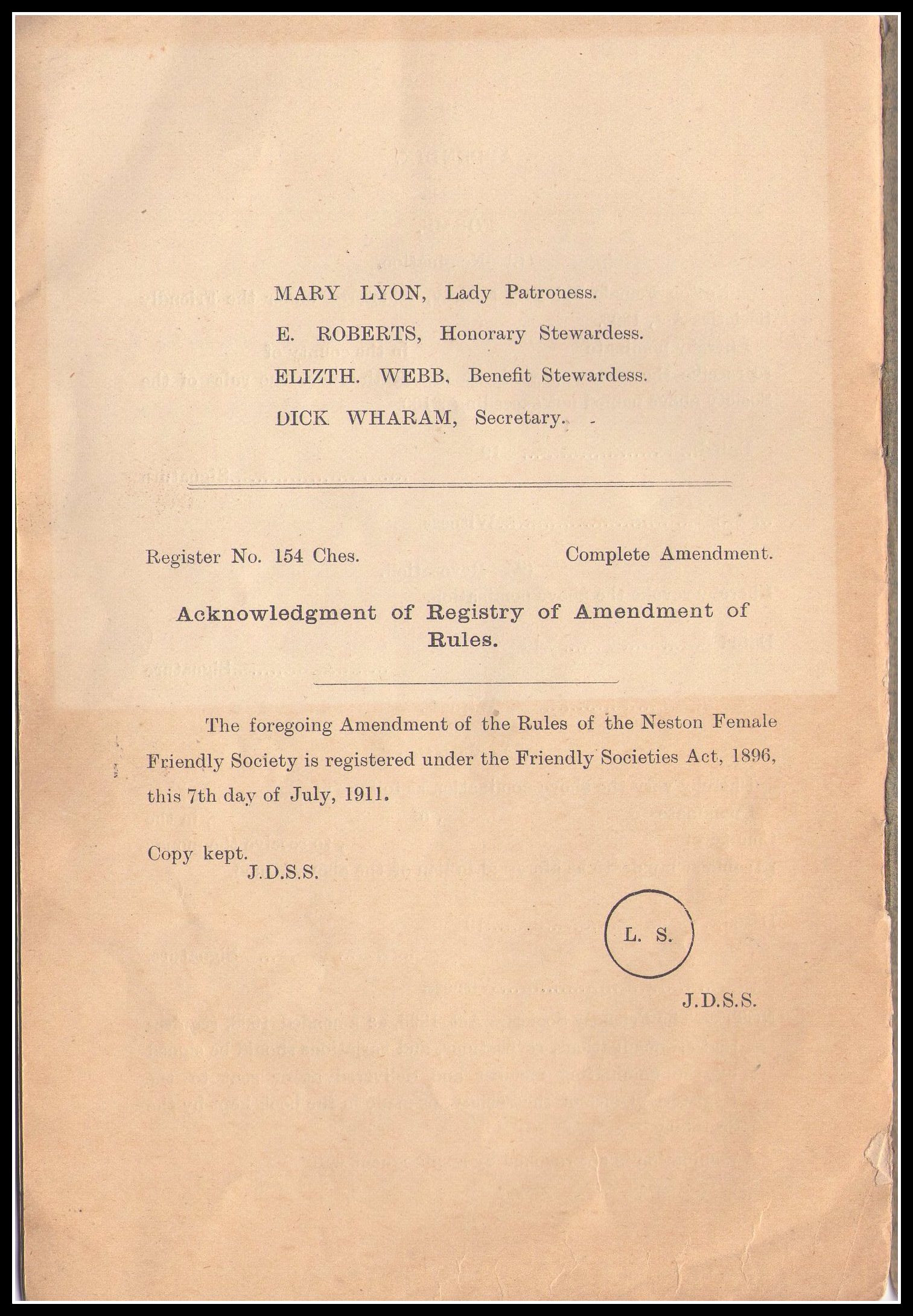 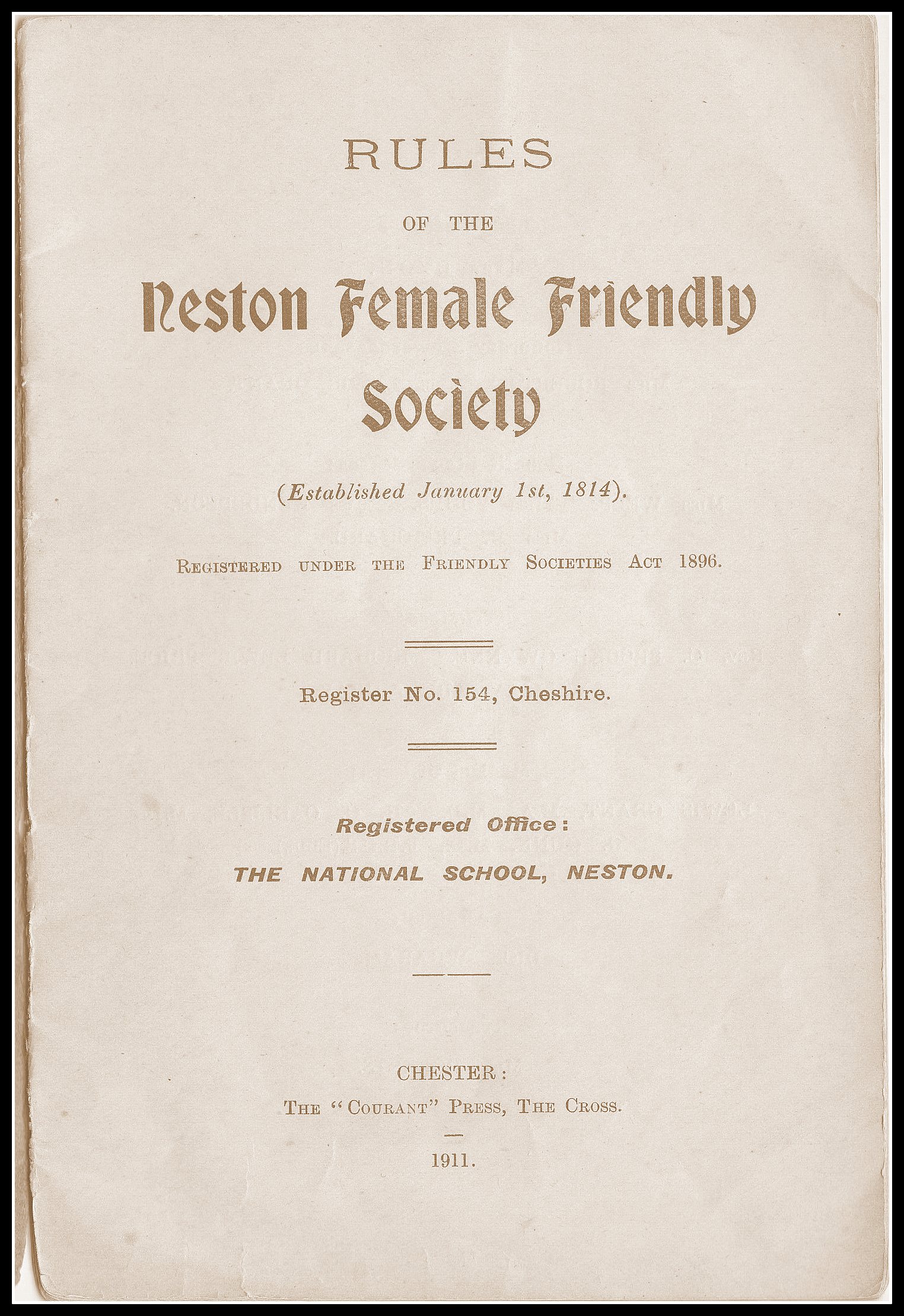 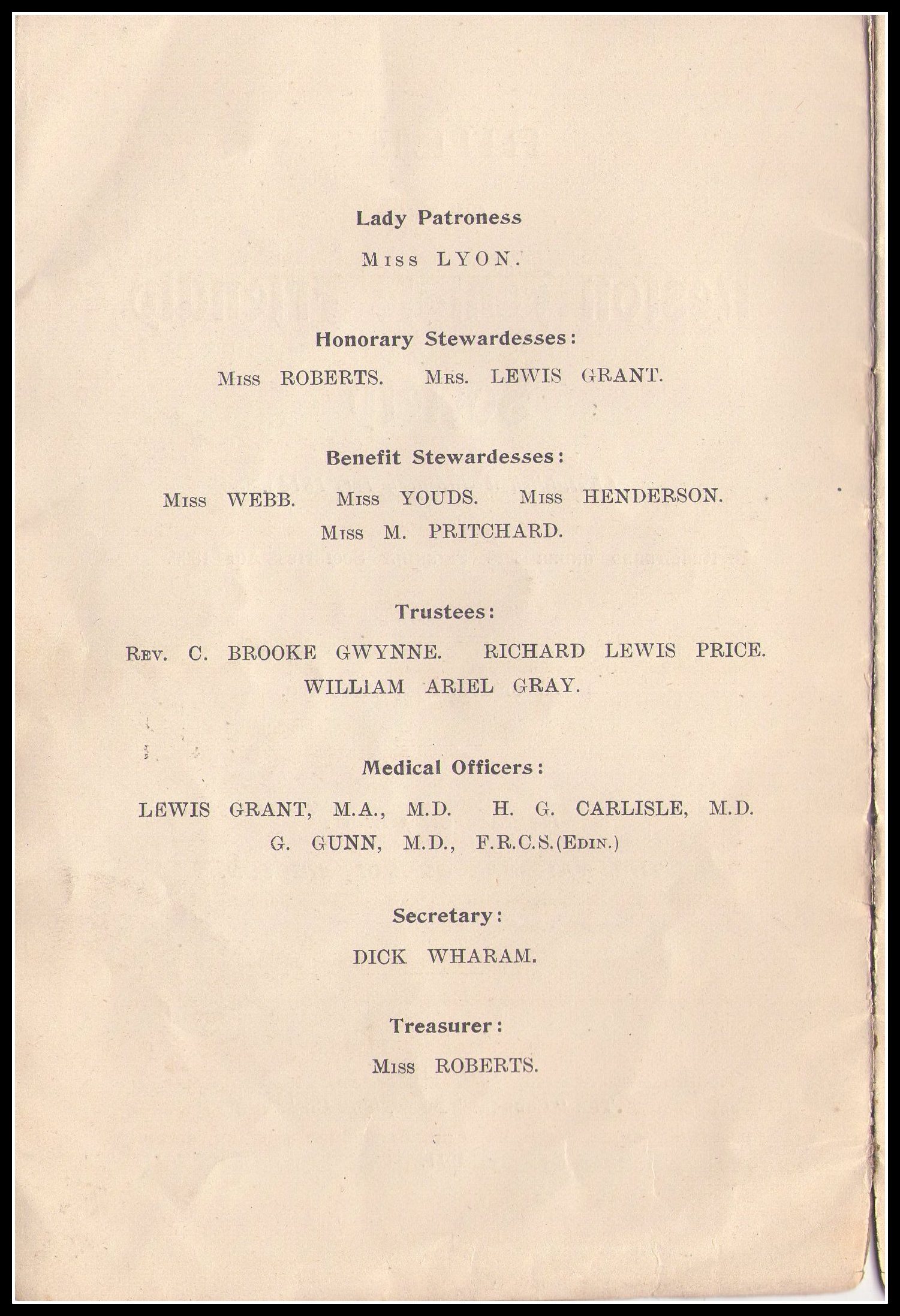 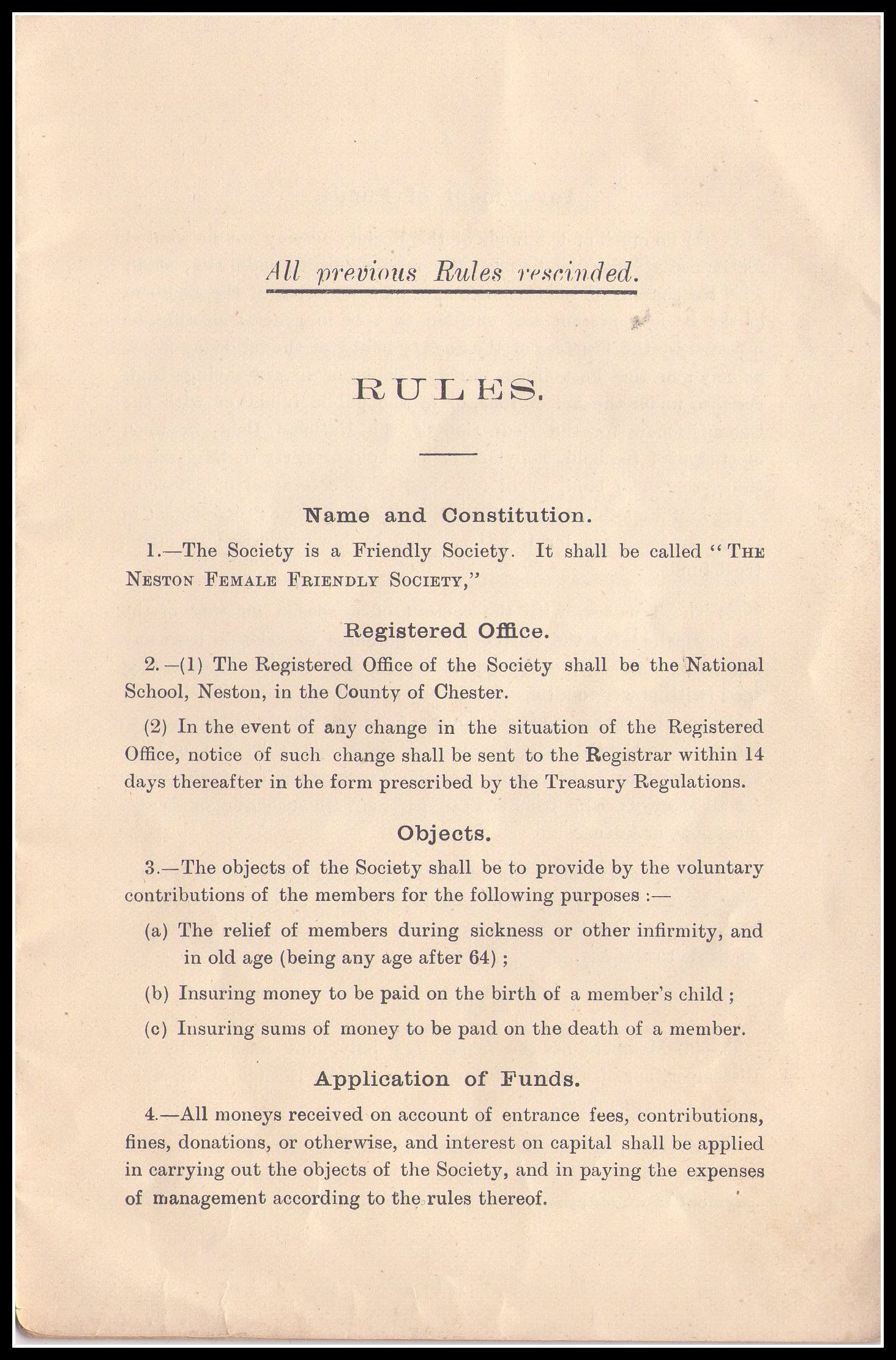 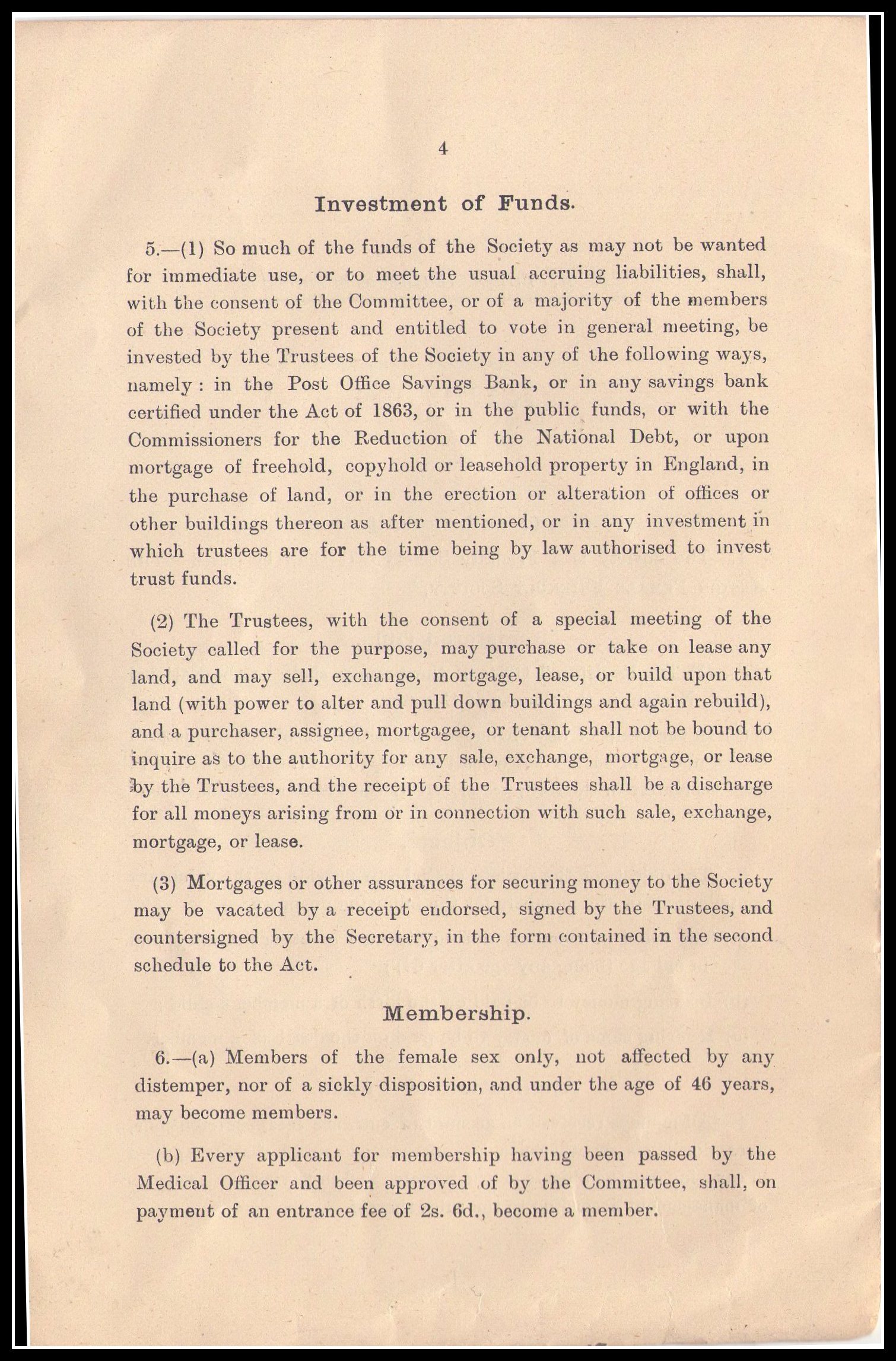 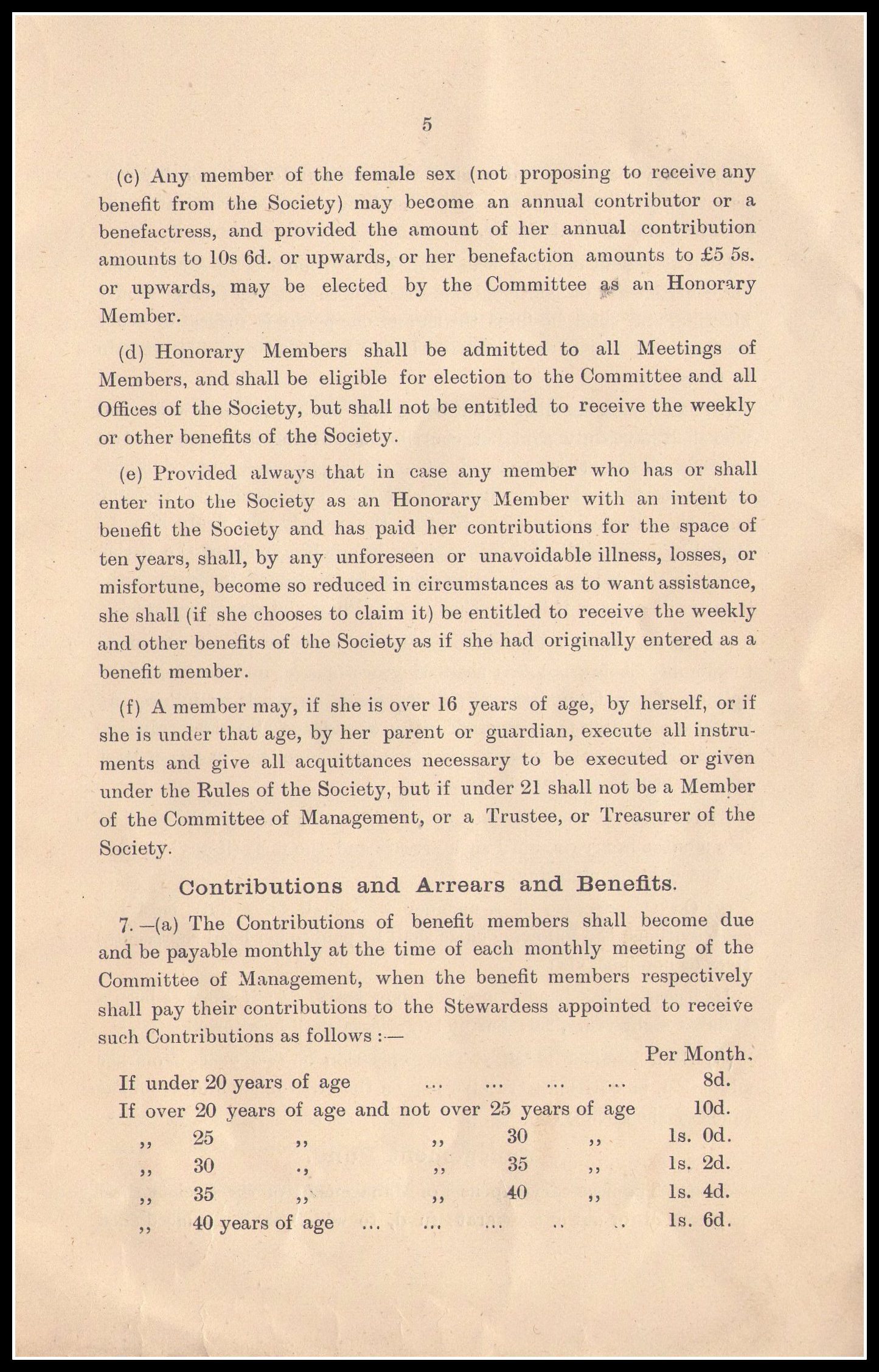 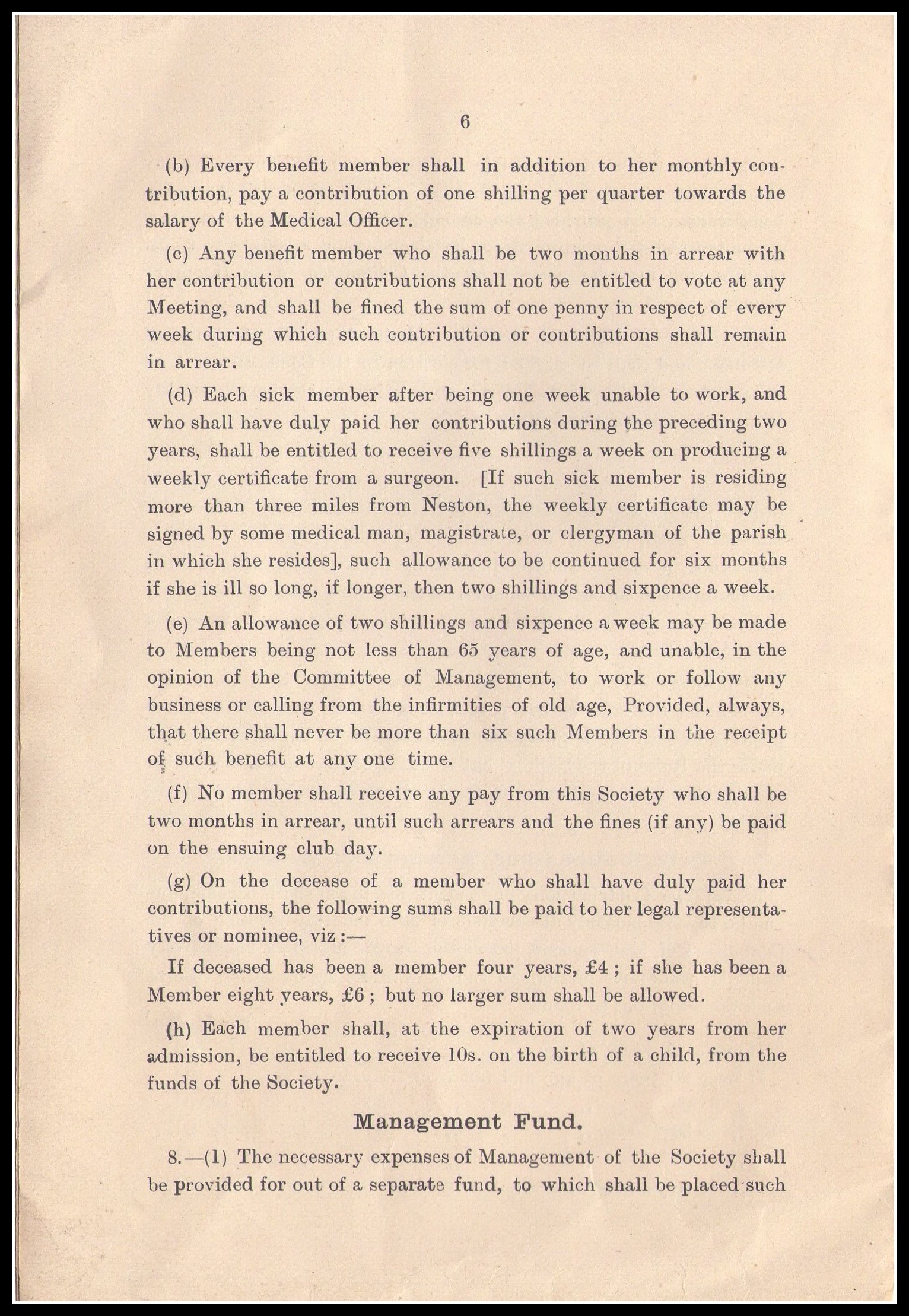 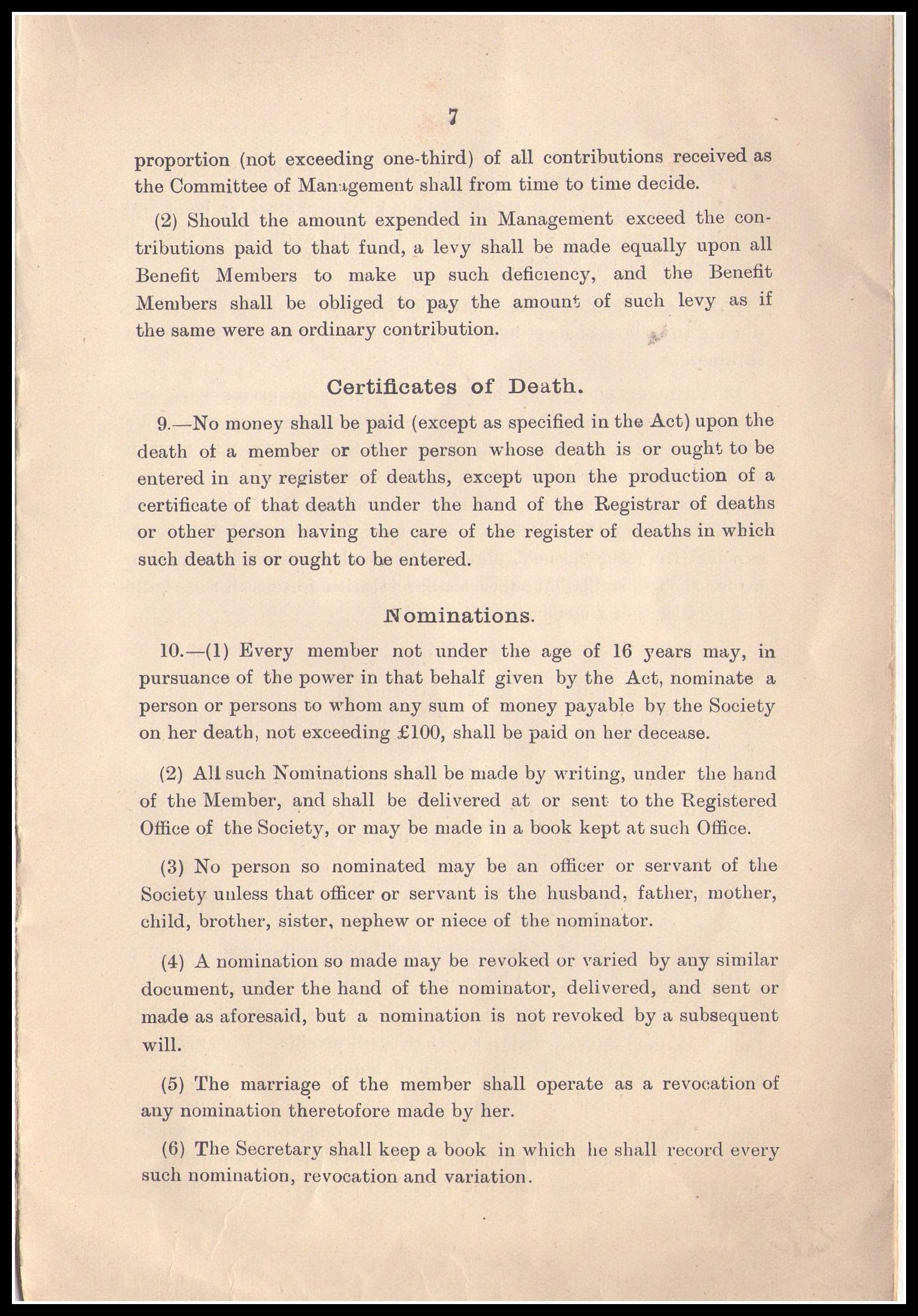 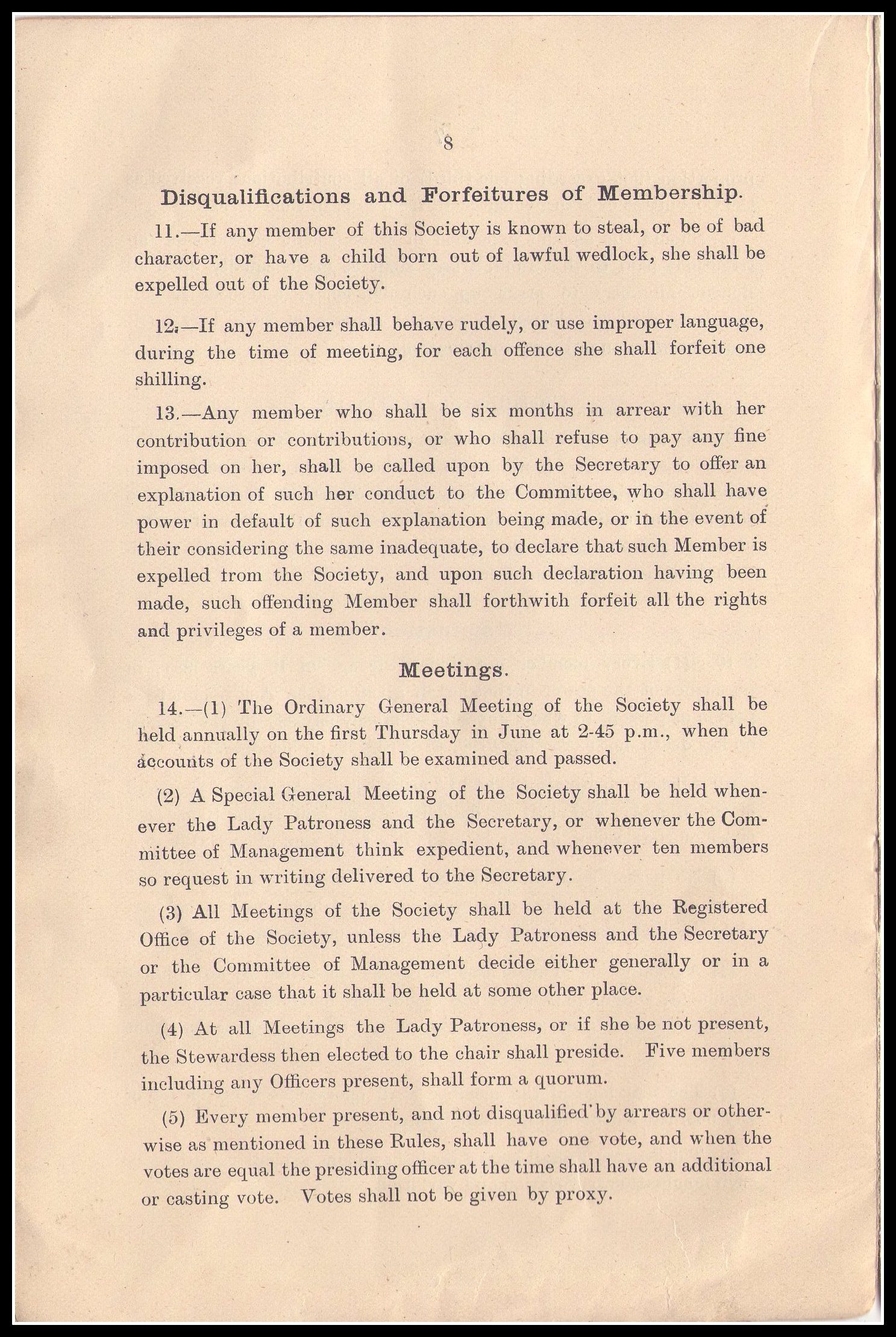 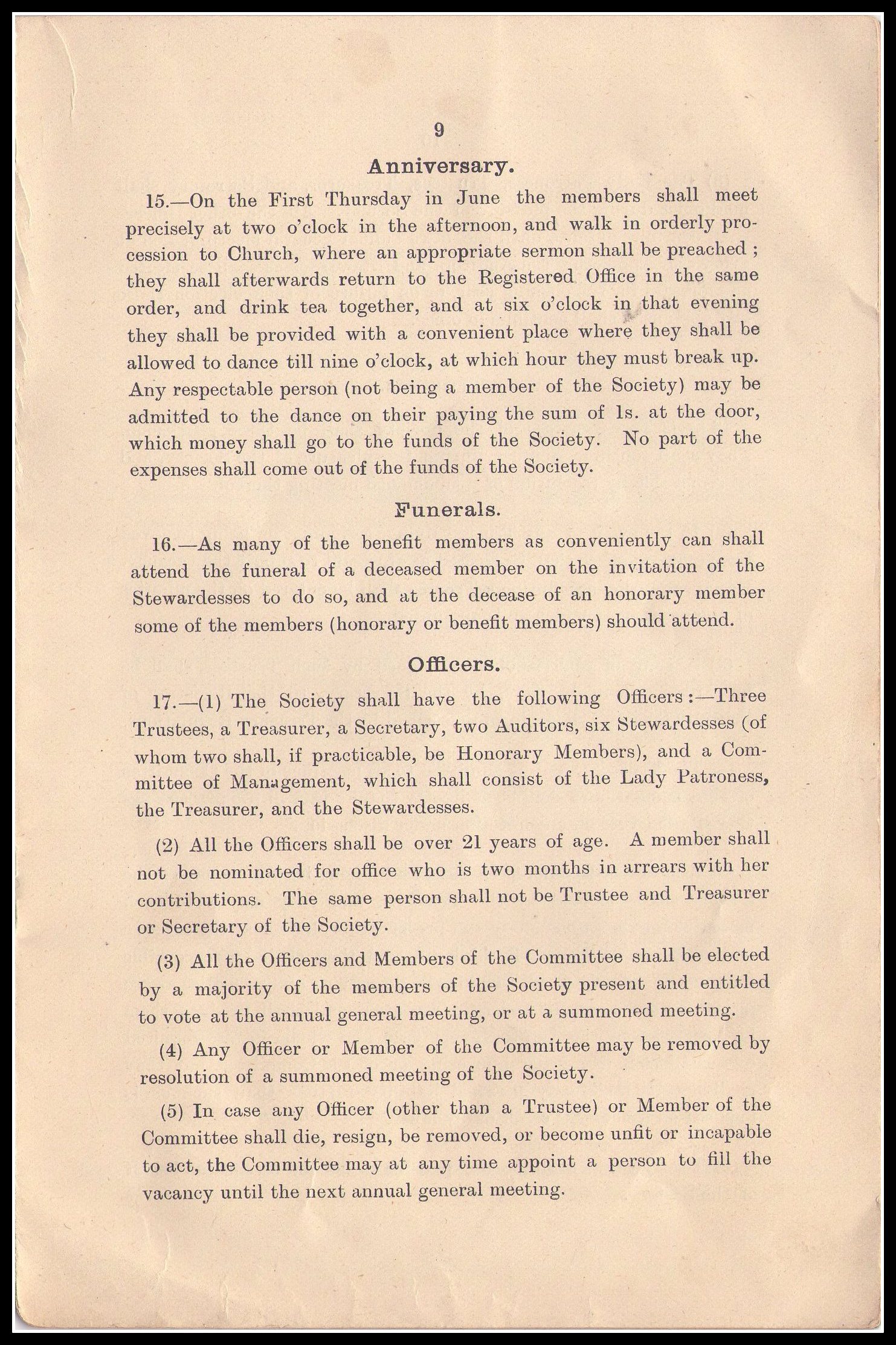 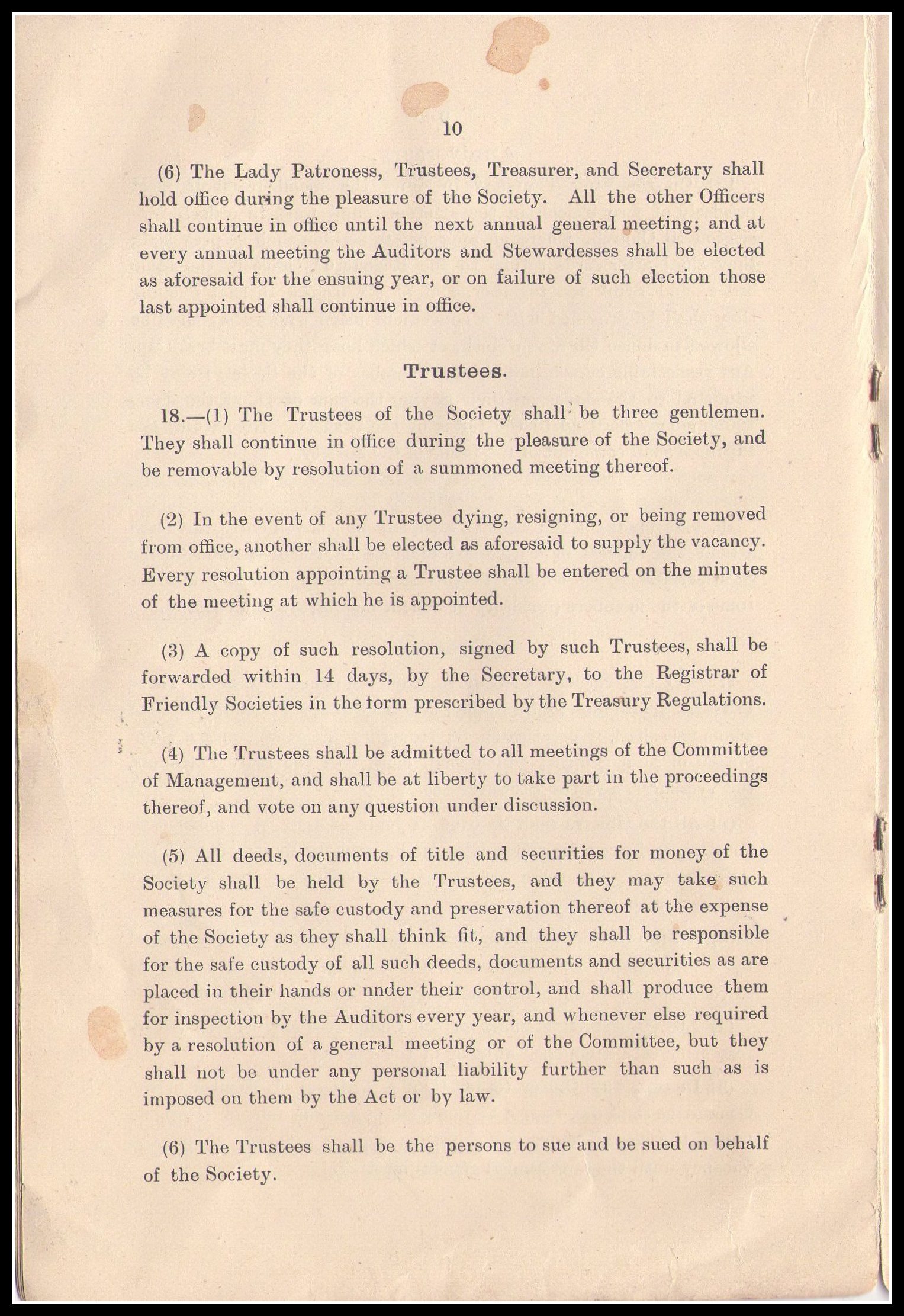 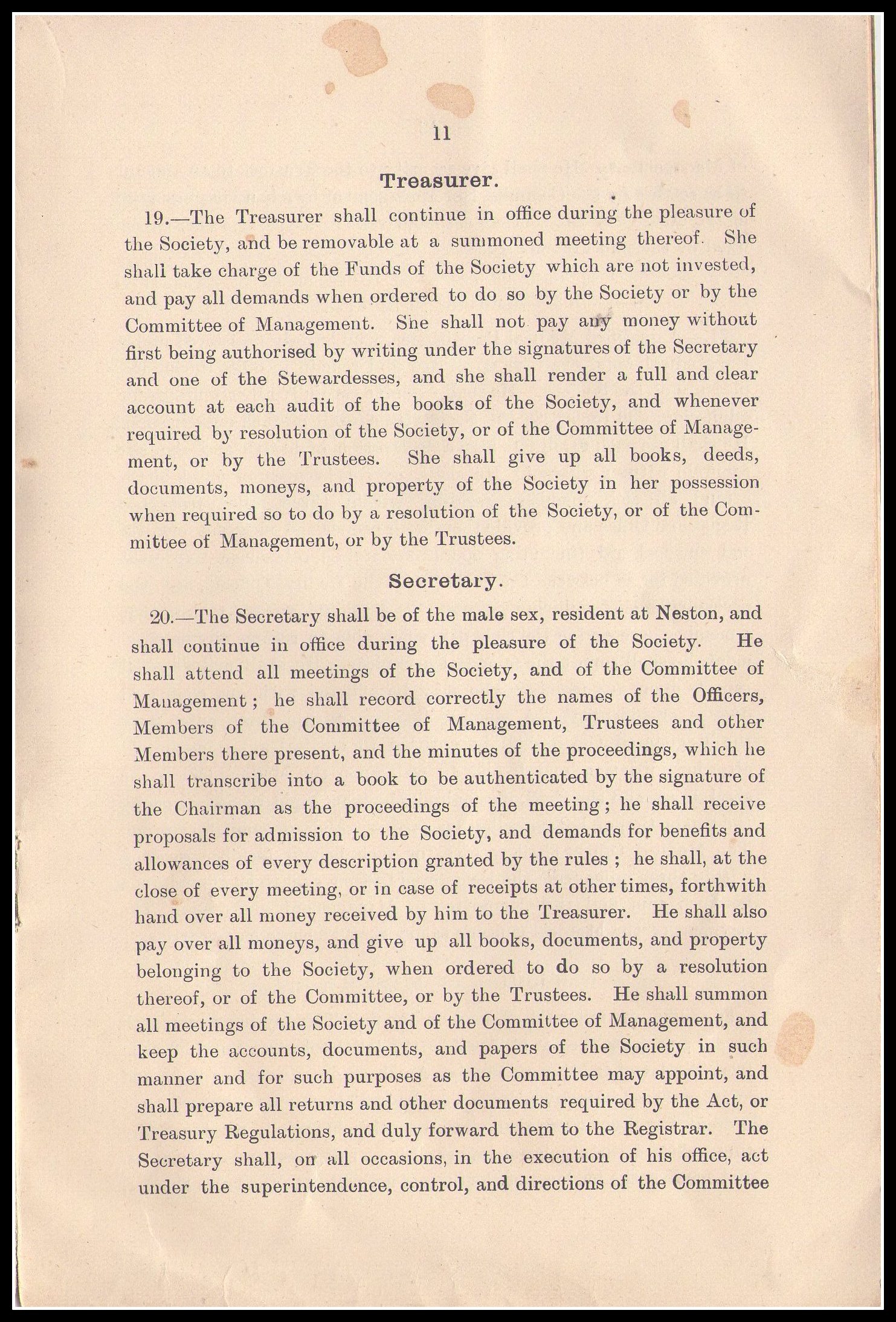 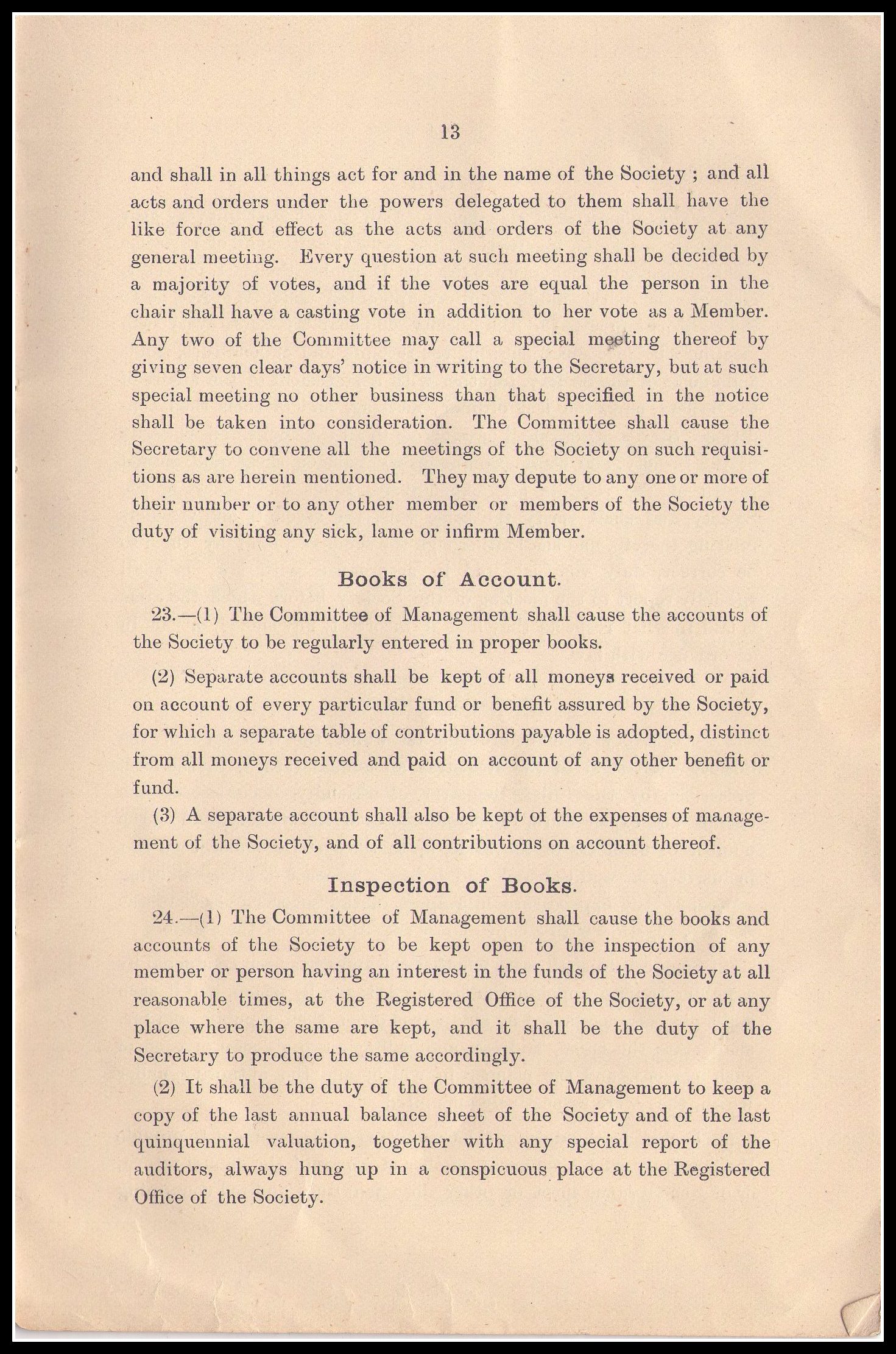 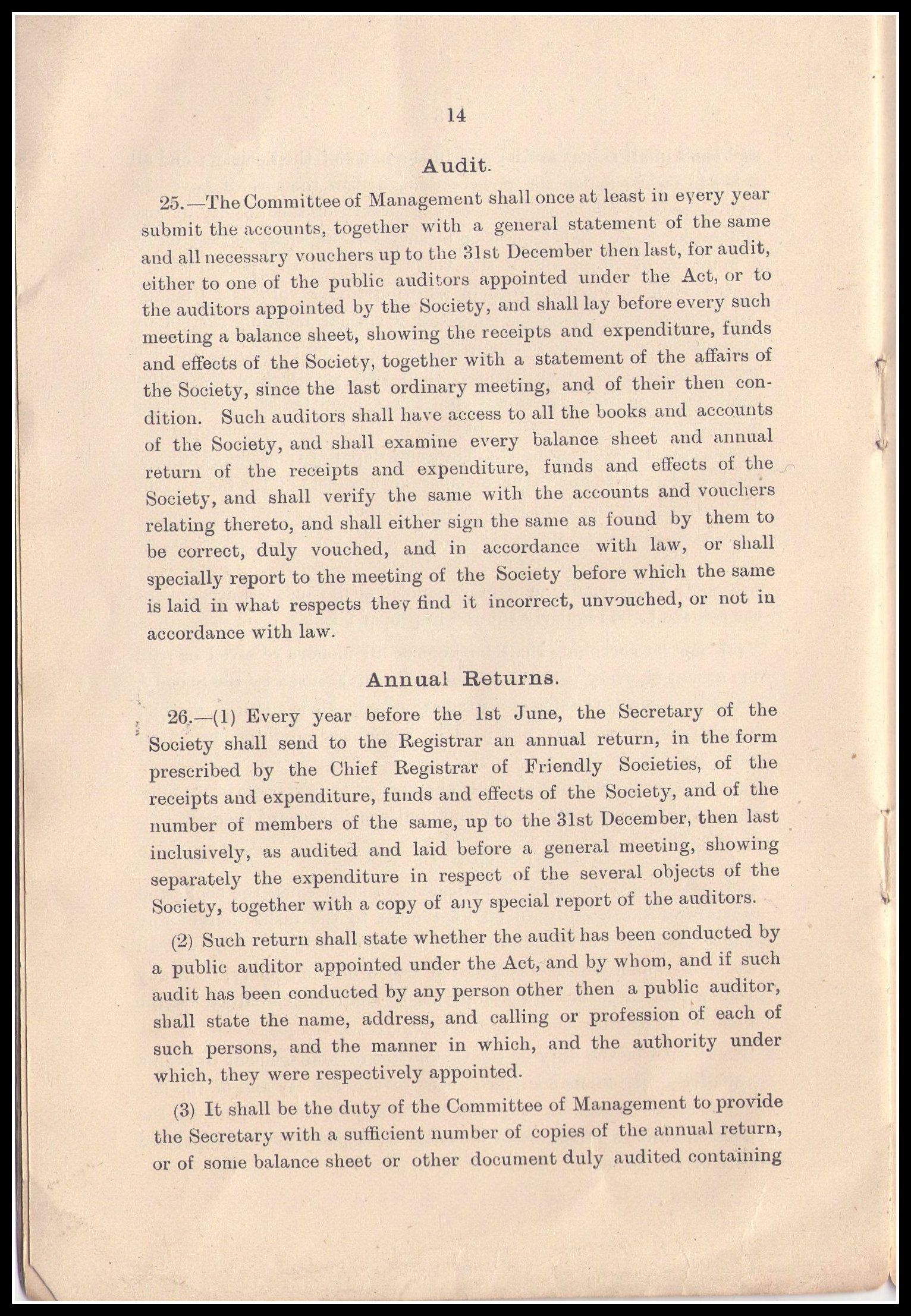 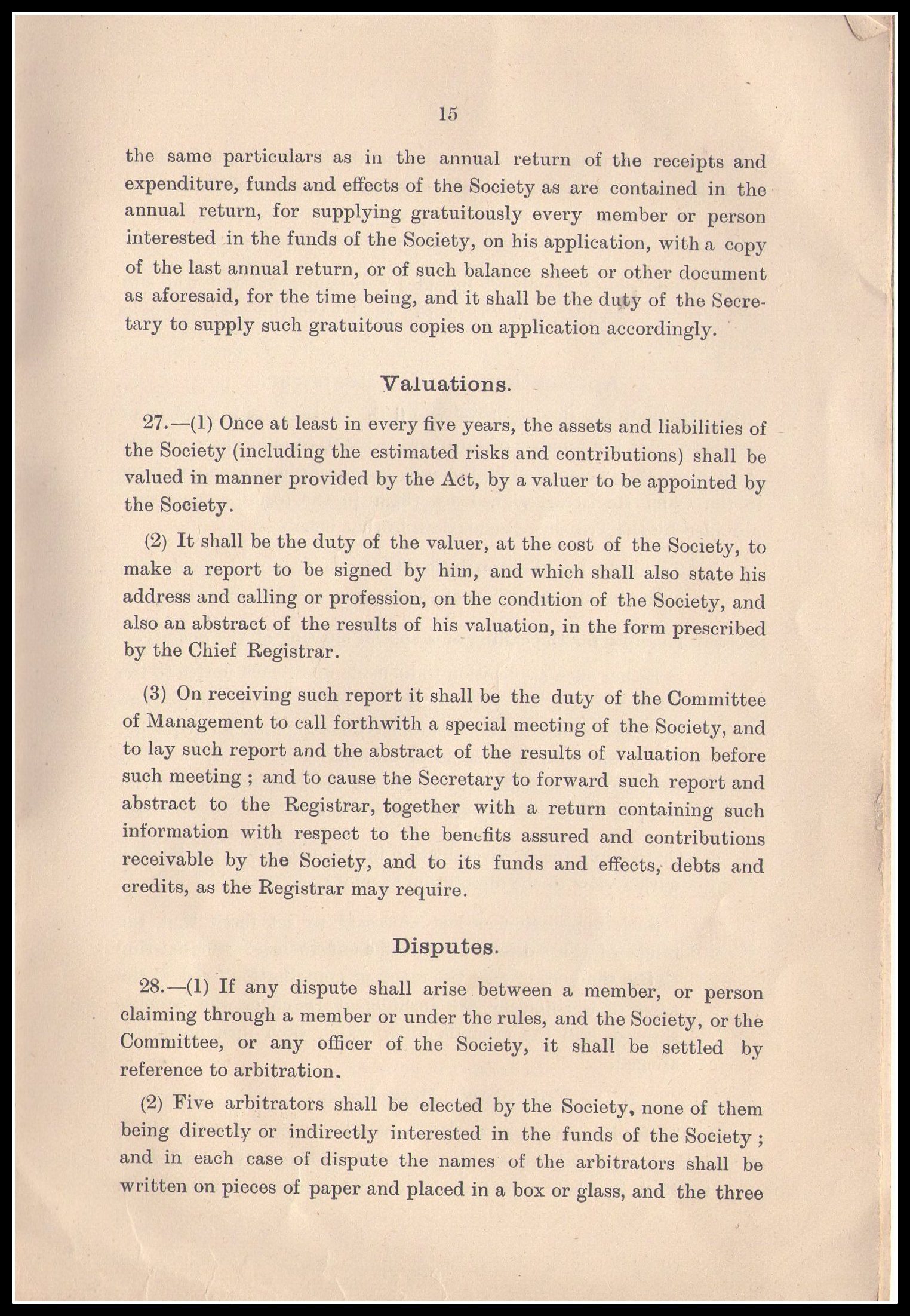 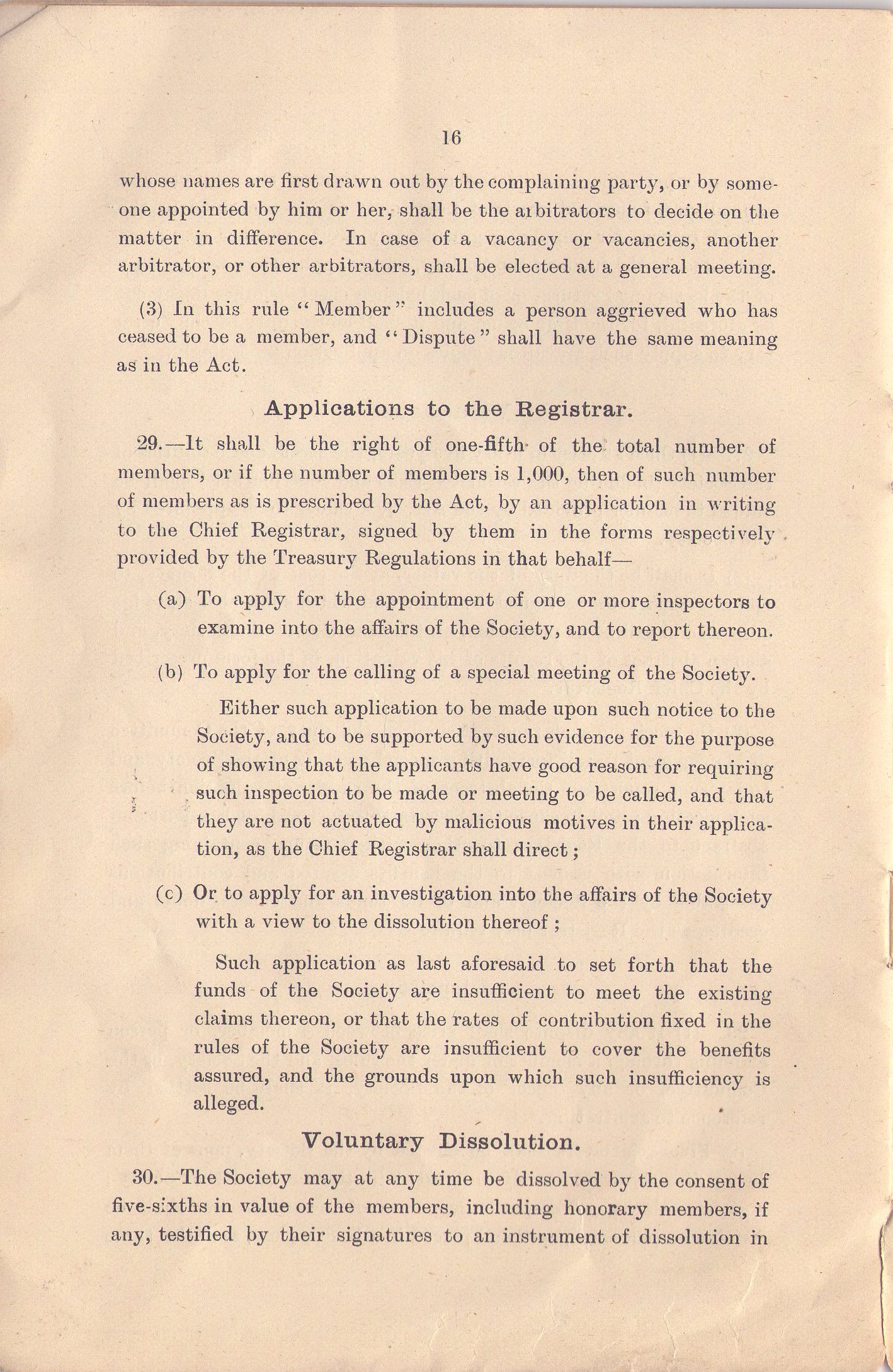 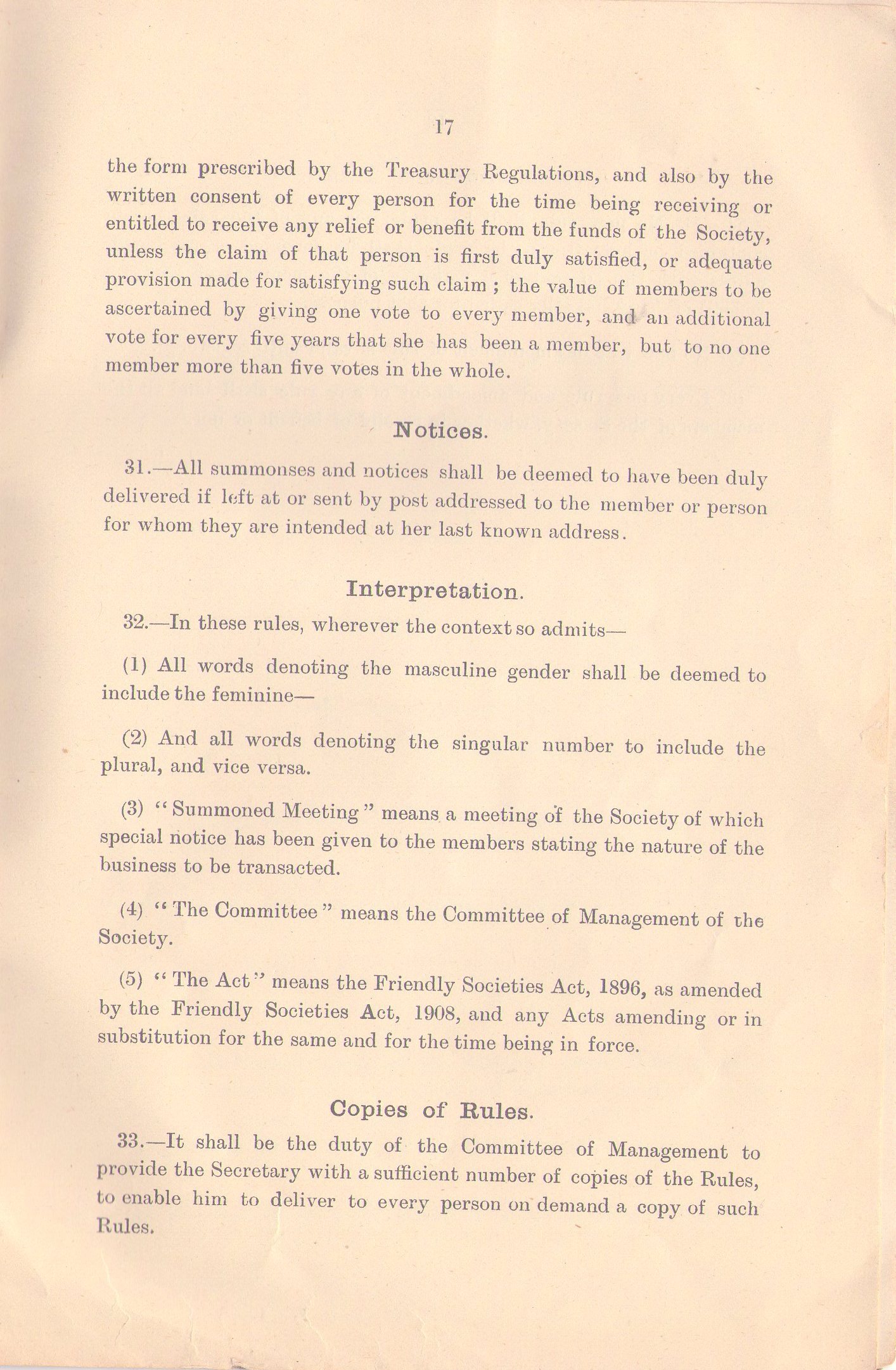 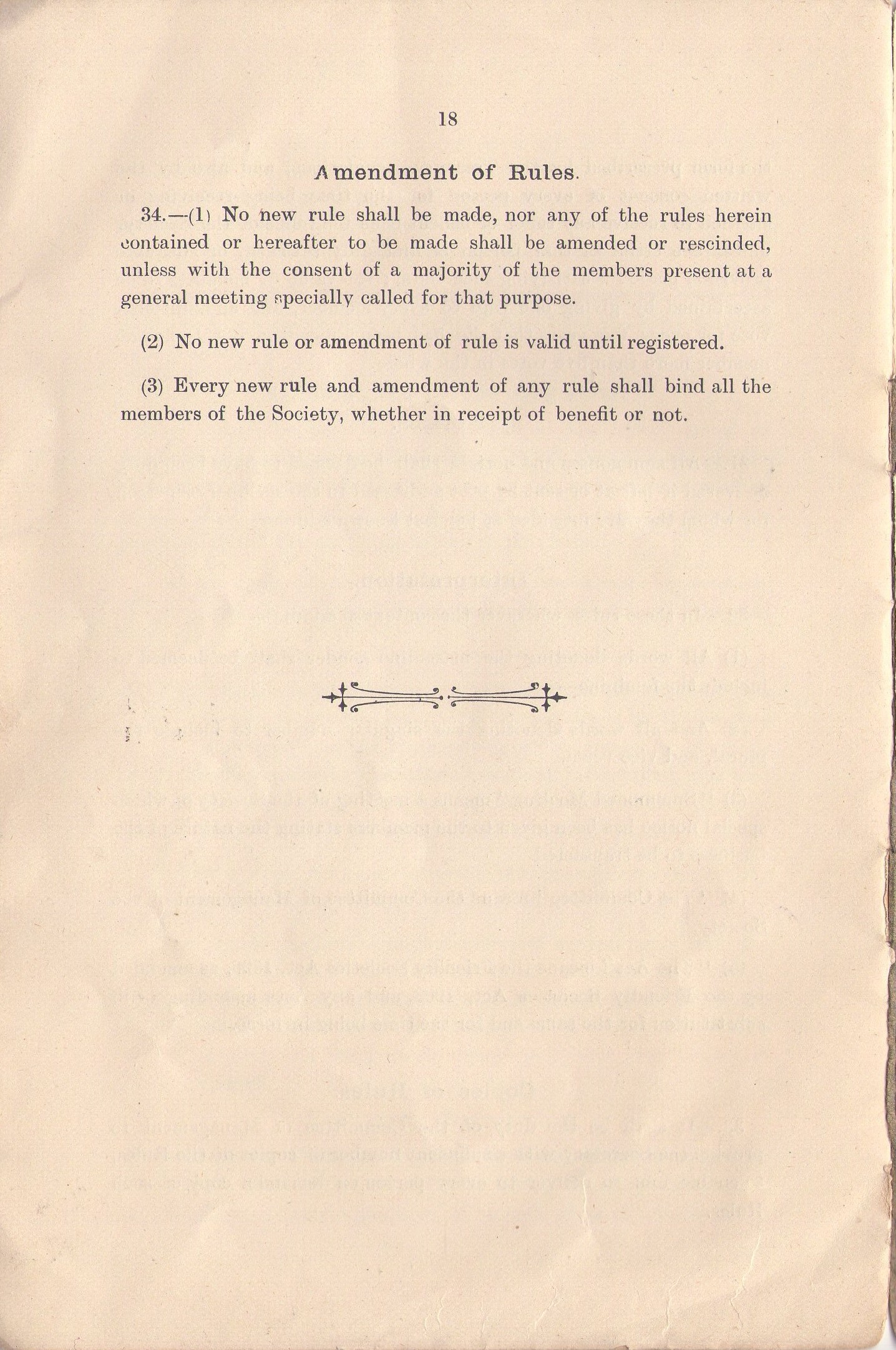 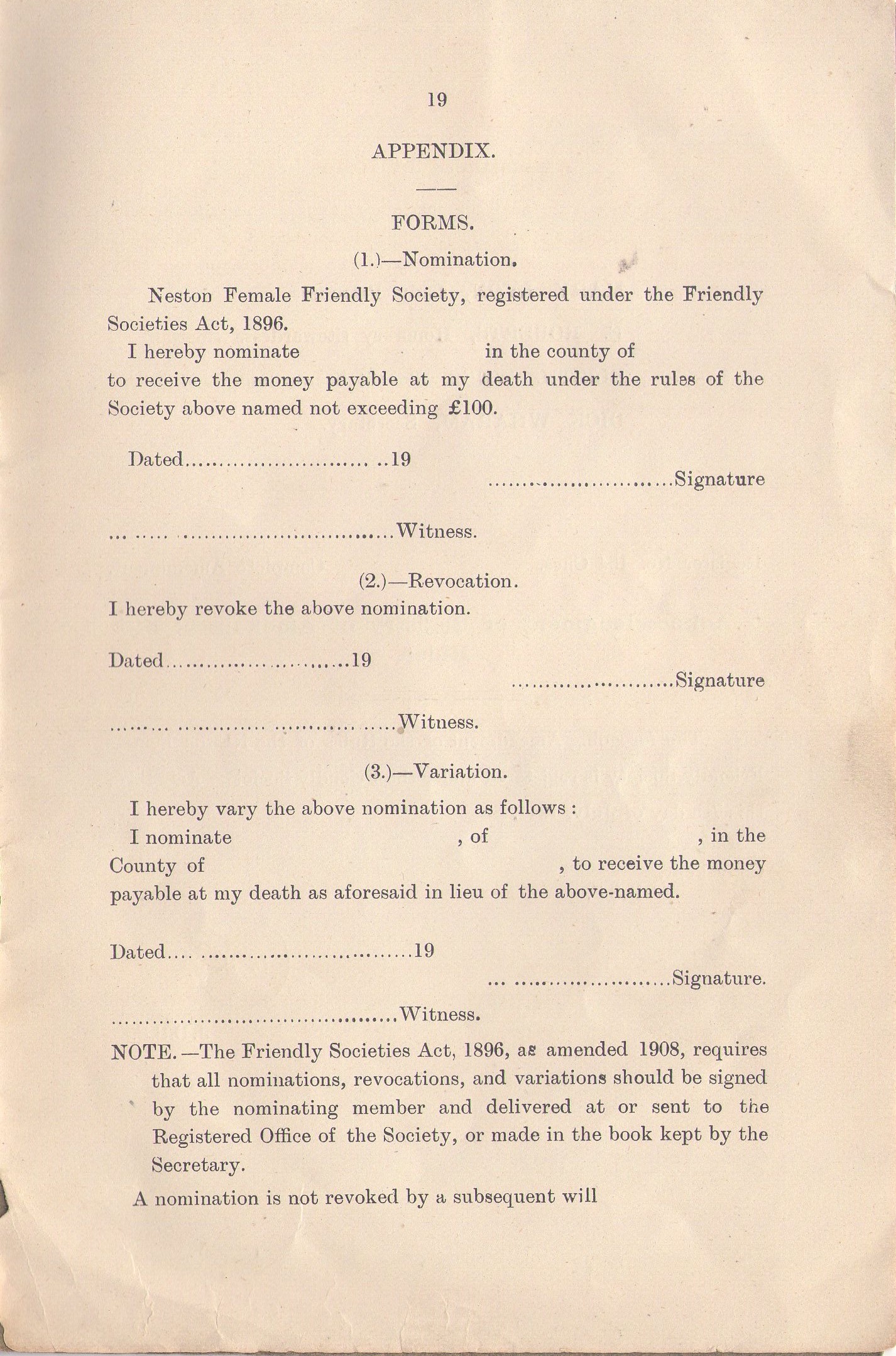