The duties of the Lady Patroness, unlike those of the Stewardesses, Secretary and Trustees, were not prescribed in the original rules.

The Society’s first Lady Patroness was Eliza Bayley who held the position from 1814 possibly until her death in 1820.

Eliza Bayley was the Reverend Thomas Ward’s mother-in-law and the first Lady Patroness of the Society. Thomas Ward (1757 – 1827) was Vicar of Neston from 1787 until his death in 1827. She was born Elizabeth Paradine in Colchester, Essex in 1737 the daughter of Robert Paradine, a baymaker. She married Samuel Bayley of Manchester, a lieutenant in a dragoon regiment, in 1764 and their daughter Anne (1765 – 1793) was born the following year in 1765. Elizabeth was widowed when Samuel died in 1776.

At some point Eliza went to live with the Reverend Ward and his family possibly after the death of her daughter. She was certainly living there by 1798 when she was included in a list of Neston residents making voluntary contributions to the war effort which was published in the Chester Courant on Tuesday 3rd April, 1798. When she died intestate in 1820 her granddaughters, Anne Elizabeth and Frances Mary were declared beneficiaries of her estate. She was buried at Chester Cathedral.

Apart from the first Patroness, Eliza Bayley, there is no surviving record of the early holders of this position until the activities of the Society began to be reported in the local newspaper. George Gleave writing some years after the event in 1900 suggest that Mary Eliza Bond was Lady Patroness at some point.

“Mrs Bond took a deep and abiding interest [in the Society] and for many years occupied the dignified position of lady patroness”.

Mary Eliza Bond was certainly one of the Society’s founder members. She was born Mary Elizabeth Lawrence around 1763.  She was the second wife of surgeon Stephen Norman Bond whom she married on 6th January 1789 at St George’s Church, Liverpool.

Mary Bond died on 18th March in Liverpool at the home of her friend Arthur Ellison and was buried in Neston on 26th March.A plaque in Neston Parish Church commemorates her death.

An 1850 newspaper account of the Society’s annual meeting names the Reverend Yarker’s wife as Lady Patroness.

“an excellent and impressive sermon was preached by the Rev Robert Yarker, after which they proceeded in the same order to the vicarage, where the

they partook of a bountiful tea, kindly provided by the respected Vicar and his worthy lady, the patroness of the Society.”

Frances Yarker was the wife of Reverend Robert Yarker who was Vicar of Neston from 1847 until his death in 1853.

Frances Yarker was born Frances Humberston in 1801, the daughter of a Chester solicitor, Philip Humberston. She married Reverend Yarker in 1847. They had no children and after his death she lived in Mollington until she died in 1855. Like her husband she was buried at Neston.

In 1857 a brief article in the Chester Observer names a Mrs Smith as the Lady Patroness.

“The Club was established in 1814, and it is in a most flourishing condition, and one of its earliest supporters, Mr Woodward, together with the Lady Patroness, Mrs Smith, were present to enjoy the festivities.”

It is not possible to identify the lady with any certainty, however one possibility is Mrs Mary Smith.

Mrs Mary Smith, was the wife of Thomas Smith, “proprietor of houses“. She was born around 1791 in Neston. She and her husband Thomas, a joiner, lived in Liverpool for most of their married life. Evidently her husband had done well as by 1851 they were living in Windle Hill House, Little Neston and her husband’s occupation is given as “proprietor of houses”. By 1861 she was widowed and living with her son, Thomas, in Liverpool.

In 1862 the Cheshire Observer’s account ( 14th June 1862) of the annual walk refers to absence of the Vicar, the Reverend Gleadowe owing to the death of his wife ‘who, as lady patroness had done all in her power to promote the interests of the Society.’

Julia Gleadowe was the wife of Rev Richard Gleadowe, Vicar of Neston and for many years and one of the Society’s Trustees.

She was born Julia Yorke in 1819 in Oundle, Northampton, daughter of James Yorke, a banker, and his wife Jane. She married the Reverend Richard Gleadowe in 1851 in Chester where Reverend Gleadowe was headmaster of the King’s school.

She was Reverend Gleadowe’s second wife. He married Mary Smith, the daughter of a Chester attorney, in 1840. They had three sons and she died in 1845 when their youngest son, Richard, was born. Two years after his marriage to Julia York he was appointed Vicar of Neston in 1853.  They had a son, George born in 1856, and a daughter, Frances born in 1855; both were baptised in Neston.

Following the death of Julia Gleadowe, Mrs Elizabeth Lyon became Lady Patroness and occupied this position almost thirty years until her death in 1890. 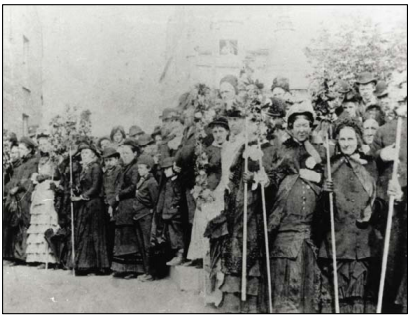 Elizabeth Lyon was the widow of Edmund Brock Lyon. She was born Elizabeth Porter, in Liverpool, around 1810 and married Edmund Brock Lyon in St George’s church, Liverpool in 1832 on 6th March. Edmund was the son of Joseph Lyon and his wife Sarah, (nee Urmson).

In 1841 the couple were living in Bebington with their children, Sarah (7), Joseph (6), Edmund (2) and Elizabeth (1). Her husband, Edmund, died in 1844 and by 1851 Elizabeth had moved to Neston with her daughters Sarah, Elizabeth, Maria and Mary. Her son Joseph was later one of the curates in Neston.

Mrs Hannah Russell was the wife of Dr. David Russell, who was the Society’s doctor.

She was born Hannah Pacey in Boston, Lincolnshire on 19th May 1835, the daughter of architect Jephtha Pacey and his wife, Priscilla. In 1861 she married David Russell, M.D. in Manchester. Dr Russell was born in Leith, Scotland and was cousin to Dr James Braid who had a practice in Neston. Before they married he was living in Dr Braid’s house and was a partner in Dr Braid’s practice.

After her marriage to Dr Russell they lived at Vine House, Parkgate Road where their children Helen, Edith, Henry, John, Frank and Annie were born. Dr Russell took over Dr Braids practice in 1865 and was surgeon and trustee of the Society. Mrs Russell was a member of the Society and Honorary Stewardess before being elected Honorary Patroness on the death of Mrs Elizabeth Lyon in 1890.

Dr Russell died suddenly on 14th September 1893 ,whilst on holiday with his brother in Leith, at the age 63. She continued to live at Vine House in Neston until her death on 23rd January 1909. 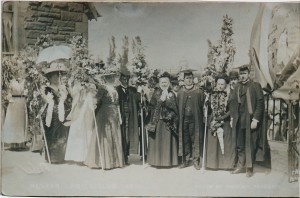 Mary Lyon was born in 1843, the daughter of an earlier Patroness, Mrs Elizabeth Lyon, and her husband Edmund Brock Lyon. She lived at Elmleigh, on Parkgate Road with her sister Maria until Maria’s death in 1910. She died in 1925.

Mabel Troughton was the wife of the Reverend Leslie Wycliffe Trussell who was Vicar of Neston from 1920 until his death in 1923.

She was born Mabel Edith Fussell in Salisbury, Wiltshire in 1867, the daughter of a bank manager, William Fussell . She married Rev Leslie Wycliffe Troughton in 1893 and for most of their married life they lived at 4, Town Lane, Rock Ferry where Rev. Troughton was vicar.

He died suddenly in 1923 in the garden of Vine House. After his death Mrs Troughton remained in Neston, living at Penketh House until her death on 14th January 1945.

Dorothy Forsyth was the wife of Dr Charles Forsyth.

She was born Dorothy Mary Livermore in India in 1887, the daughter of a tea planter, Martin Livermore and his wife Emily Nessie Livermore (nee Brown). Emily Livermore was the granddaughter of Ann Brown (nee Monk) whose sister, Arabella Monk, was one of the founder members. When her Dorothy’s father retired around 1893 the family lived in Neston at Turzum on Parkgate Road. Her mother, Emily, was a member of the Society.

When Emily’s uncle, Charles Brown of Newton, Chester, died in 1900 he left eight properties fronting Mill Street and Parkgate Road to her.

Dorothy married Dr Charles Forsyth in 1908. They lived in Hong Kong where he was a medical officer and lecturer at Hong Kong University. When they returned to Britain they lived at Dorothy’s family home, Turzum.

When her mother, Emily died in 1928, she left Turzum and the property she had inherited from Charles Brown to Dorothy.

Charles Forsyth died in 1955 at the age of 80. Dorothy died eleven years later in 1966 at a nursing home in Sussex.

Harriet was born Harriet Ethel Brown in Atcham, Shropshire   in 1894. She came to Neston as a young woman to nurse an Aunt who lived in Parkgate Road. She married Harry Hough in 1938. Her husband was at one time a Neston councilor who had a paint shop on the Cross in Neston. The lived at Sea View at the bottom of Mill Street. She was a member of Neston Female Friendly Society and served as Treasurer before becoming Lady Patroness, a position she held until 1992. She died in 1996 at the age of 102.