John Cliffe was born in Ridley and baptised at Bunbury in 1788, the son of Samuel and Elizabeth Cliffe. On 15th February 1810 he married Phoebe Young in Bunbury. 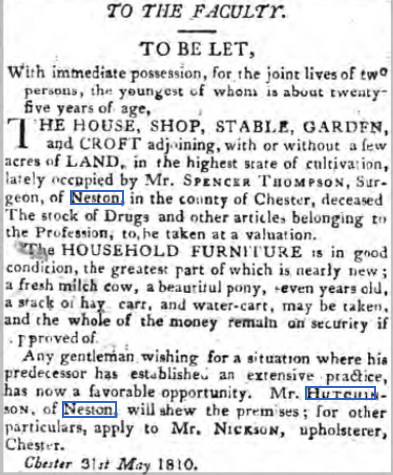 In June 1810 the Neston premises and practice of the late Mr Spencer Thompson, surgeon, was advertised in the Chester Courant (Mr Hutchinson, husband of Ann Hutchinson was named as the person to contact for further details). A few months later on 15th June 1810 an advertisement appeared in the Chester Chronicle advising the people of Neston that Mr J. Cliffe had taken over the practice and was offering his services as apothecary, surgeon and man-midwife. He was then 22 years old.

By the time the Society began in January 1814 John and Phoebe had two children: Margaret born May, 1811 and Samuel Young born July 1812 and a third child, Francis Washington, was born shortly afterwards in April 1814.

He was appointed Surgeon to the Society for which he received  a salary of £15 per year. When members of the Society had paid into the Society for a period of two years they could receive a payment of 4 shillings per week if they were sick  and one of his duties was to provide an order to support their claim. He also provided care and medicines when they were ill.

The regulations made provision for an increase of a further £15 per annum when the membership reached one hundred. A note was added to the regulations in February 1818 recording the members’ agreement to increase his salary to £30 per annum for which he would also provide midwifery services. Until this time the regulations allowed a payment of 5 shillings directly to the mother at the birth of a child for payment of a midwife but this was to cease as a midwife would no longer be required. Some fifty years later it appears that the Society had reverted to the original arrangement of making a payment direct to the mother.

John and Phoebe’s fourth child, Henrietta Mary, was born in March 1816 but died two years later in September 1818 shortly before the birth of a son, Owen William. In December 1820 Phoebe again gave birth to another daughter who was named Henrietta Mary. All the children were baptised in Neston.  Mr Cliffe was still practicing in Neston in 1822 when he was listed in Pigot’s Commercial Directory of Cheshire. Their last child, John, died when he was only a few hours old and was buried in Neston in August 1822. 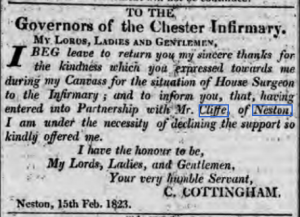 In February 1823 a Mr C. Cottingham (possibly Charles Cottingham) entered into partnership with him and it is likely that he took over the Neston practice.

When John Cliffe died in the following year, at the early age of 35, he was living in Tarporley.  He  died on 7th May, 1824 and was buried at Bunbury on 11th May 1824. An obituary appeared in the Chester Courant in the following week.