The Elliott coal-washer at the Wirral Colliery

Built by the Hardy Patent Pick Company Ltd. of Sheffield the ‘Elliott Patent coal-washer’ was a modified, automated and adjustable version of the earlier, manually-operated, trough washer.

The version purchased and installed at the Wirral Colliery consisted of a steel trough, 60 feet long and 30 inches wide at the top, the sides sloping inwards towards a base that was 18 inches wide. The trough was mounted, at an inclination of 1 : 12 [about 5°], in an elevated housing. Within the trough was an endless chain to which scrapers, 4 inches deep and at right angles to the chain, were attached at intervals of 6 feet. This chain, with attached scrapers, passed around sprocket-wheels at each end of the trough, the upper (returning) part of the chain and scrapers being supported above the trough on rollers and brackets. 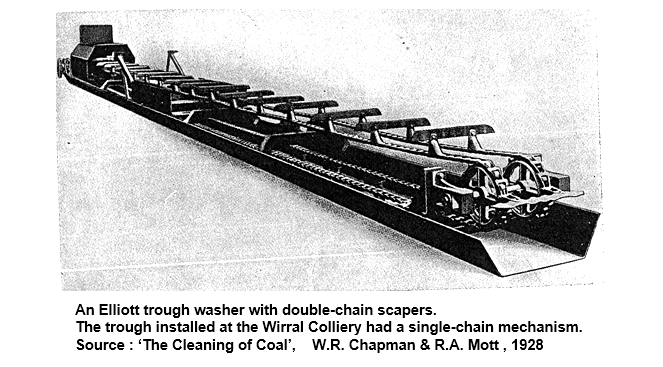 Driven by an engine (Platt gives no details of this, although it is likely that the washer was driven from the engine house serving the pithead a few yards to the south) the chain with its attached scrapers moved slowly (at a rate which could be varied, but normally at 14 – 22 feet/minute) within the trough. At about half way along its length, screened coal was automatically let into the trough at a regulated rate from a hopper and, at the top (higher) end of the trough, clean water (at a rate of ‘..about 150 gallons/minute..’, but variable) was admitted to the trough. The endless chain pulled the scrapers upwards along the bed of the trough, the scrappers forming small travelling dams against the flow of the water and suspended coal.

The principle involved in the separation of the coal from ‘dirt’ was, as in the simple trough washer, the difference in specific gravity. Coal, being less dense, was carried down the trough where, suspended in the water, it cascaded over the scrapers and was deposited at the lower end. The ‘dirt’, being denser, settled to the bed of the trough where it was scraped to the upper end. At the lower end of the trough an inclined, vibrating, perforated gauze plate drained the water from the cleaned coal which was led onto an endless-belt elevator which raised it into a storage box. This storage box, a substantial structure external to the main building housing the washing plant, had a hoppered bottom and a sliding door which facilitated the loading of coal-wagons which ran on rails below it.

At the trough’s upper end the ‘dirt’ was led into a small tram or coal-wagon for removal. Water removed from the trough was led to a settling tank to remove sediment and returned, by a 3 inch centrifugal pump and control valve, to the upper end of the washing trough.
In his paper James Platt noted the simplicity of the washer and the lack of technical expertise required to oversee its operation:
‘…a wide range of conditions can be complied with, and when [the coal-washer is] regulated for any kind of coal, need no further attention. The washer is perfectly automatic in its action; the attendants are required only to see that the supply of coal remains constant, that the washed coal is taken away, and that ordinary attention necessary to any machinery in motion is afforded’.

The plans accompanying Platt’s paper show two parallel coal-washing troughs. One trough only had been installed in 1895, presumably to ascertain its effectiveness before a second trough was purchased.

The building was, approximately, 72 feet long. Dirty coal was led into the central section of each washing trough from a hopper, A. The storage box was a separate, raised, building, into which the clean coal was lifted by an endless belt elevator system. Within the trough washers the water and coal moved from the left end to the vibrating screens at the right end of the building. The scrapers on the endless chain within the troughs dragged the settled ‘dirt’ towards the left end (against the water flow). How, in the system used in Wirral, the ‘dirt’ was removed is not explained in detail in Platt’s paper. The prefabricated housing for the Elliott trough washers was supported on elevated legs and braced with cross-beams. It is probable that the housing consisted of a sturdy wooden planked floor and corrugated sheet metal panels fixed to an iron framework. Beneath the building were drive shafts, pulleys, water pipes, water pump and part of the coal supply and coal removal systems (not shown). The floor of the tri-section building stepped down to the north (left) to allow for the inclination of the trough washers; water and washed coal moved to the southern end of the building. The central building was taller to accommodate the hopper supplying the coal to the washers and the elevator system supplying the coal from near ground level to the supply hopper. At the northern end of the building the washed coal was raised by an elevator system into the large, raised, storage box (partly shown in this reconstruction). Washed coal from the storage box would be let into wagons which ran on the rails paralleling the washing plant and under the storage box. At the south end of the plant , waste ‘dirt’ from the troughs was removed into wagons, possibly by means of a chute (details unknown).

The results of coal-washing at the Wirral Colliery

The single Elliott coal-washing trough erected in about 1895 in Little Neston was capable of dealing with 100 tons of coal over a working day of ten hours, but Platt noted that the ‘guaranteed rate’ of 10 tons per hour could be increased to 11 tons per hour. At Wirral, as at most other collieries, coal-washing was restricted to small coal (slack) where the value of ‘dirt’ separation was most financially viable. The coal fed to the trough was
‘..all that will pass through a screen with 1 inch and 1¼ inches parallel bars; the dust, peas, beans, and nuts all being mixed together. A vibromotor screen is provided, so that a separation can be made when desired, and the fine coal or the nuts only washed..’

The efficiency of the washing process was reported to be high as
‘The amount of ash contained in the slack before washing was 25 per cent, and after washing, analysis showed 4.2 per cent. of ash in the coal of which 1.20 per cent. is free dirt and 3 per cent. is natural residue.’
This ‘natural residue’ represents incombustible material contained within the body of the coal fragments and, hence, unable to be removed by any form of cleaning technique. The analysis shows that the Elliott washer removed over 94% of the ‘free dirt’ from the coal.
Just as importantly it was noted that
‘The dirt appears to be perfectly free from coal..’

The cost and its implications

James Platt, in answer to a question following the presentation of his paper, stated
‘The cost of the complete plant, including house and storage-boxes, was £730. The capacity of the plant is now being doubled [by the purchase and installation of a second Elliott coal-washing trough], at an additional cost of £260.’

Some perspective can be given to these capital costs; a miner’s wage was around 30s per week and, although we have no accurate record of the pithead price of coal at the Wirral Colliery, coal nuts cost around 9s per ton and best slack around 6s 9d per ton at that time in the Wigan district. If the cost of washing the coal added less than 1d per ton, as Platt had stated, to the pithead price of the coal, then this slight increase would have been more than offset by the customers’ perception of a better-quality product. Perhaps more important was the fact that small coal could be upgraded significantly in quality and attract a premium rate; in the Wigan district best slack sold for up to 2s per ton more than ordinary slack.

The role played by coal-washing at the Wirral Colliery appears to have been undocumented but, as an appliance, the Elliott coal-washer went from strength-to-strength and was installed subsequently in numerous British collieries. Advanced and improved versions of the Elliott machine, using serrated or corrugated scrapers and the addition of a ‘primary washer’ to remove the larger fragments of dirt before the main washing process, appeared on the market over the next 30 years. As the national demand for clean small coal increased around the turn of the 19th century more manufacturers, promising even greater washing potential, entered the coal-washing market: the Blackett rotary washer (1895), the Murton washer
(1894), the Lührig washer (1887) and the Bell & Ramsay Trough washer (1889) all competed for attention.

By 1928 almost all the coal mined in Britain was screened and, although the hand-picking of large coal was still common, much of the small coal (amounting to about 25% of total coal production) was being washed and sized before being marketed.

In Little Neston, James Platt, who by 1906 had become a councillor for the Neston Ward of the Neston & Parkgate UDC, remained as manager of the colliery until 1910 and died the following year aged 67. It is quite possible that the Elliott coal-washing plant installed in 1895/96 was still operational long after Platt’s death when coal mining finally ceased in Wirral in March 1927.

and an unproofed version of the same paper was printed in the ‘Transactions of the Chesterfield and Midland Counties Institute of Engineers’, v. XX1, 1895-96

‘The Colliery Guardian & Journal of the Coal and Iron Trades’,

Detailed descriptions of trough washing, the Elliott washer, and others, are in

‘The Colliery Guardian & Journal of the Coal and Iron Trades’

Additional background material on the history of coal mining in Britain, wages, social conditions and coal prices is found in

‘Coal : A pictorial History of the British Coal Industry’

‘Coal Mining in the Eighteenth and Nineteenth Centuries’

‘Lancashire and Cheshire from AD1540’

James Platt’s paper provides a set of detailed elevational and sectional views of the Elliott coal-washing trough, the building housing the coal-washer and parts of the mechanism. As detailed and clear as the plans are there is, however, neither scale nor dimensions. Nevertheless, a good approximation of the dimensions of the building can be obtained since, on Platt’s plans, two of the sectional diagrams show two coal-washing troughs which (without the attached coal-separation screens) we know to have been 60 feet in length. Using this length as a scale the coal-washing plant would have had the following dimensions: