1960 – The Year the Beatles Came to Ladies Club

On Thursday June 2nd 1960 the crowds came out as usual to see the ladies walk to Church followed by tea as they had since 1814. The Walk had by then been extended to include girls from local schools as well as Ladies Club members. 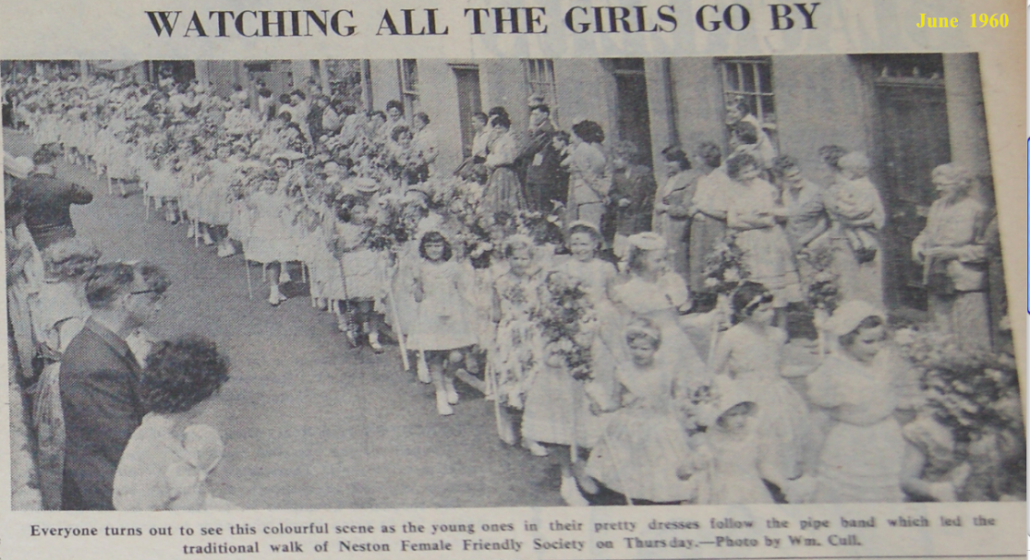 “On the first Thursday in June …..they shall be provided with a convenient place where they shall be allowed to dance till nine o’clock, at which hour they must break up. Any respectable person (not being a member of the society) may be admitted to the dance on their paying the sum of 1s at the door.”

The tea was at Neston Institute and, after the speeches, the flowers and staffs were cleared and the youth of Neston gathered for the evening’s entertainment.

Maybe there was some local disappointment, because the regular group, Cass and his Cassanovas, had successfully auditioned to go on tour with Billy Fury, and Neston had to accept the runners-up, a little-known group called The Silver Beetles.

Mark Lewisohn in  The Beatles: All Those Years: Volume 1: Tune In (published by Little, Brown, 2013) notes that although they were referred to in the advance advertising as the Silver Beetles,  a reporter who interviewed them on the night named them as The Beatles in his review: it was their first headlining advertised performance anywhere. 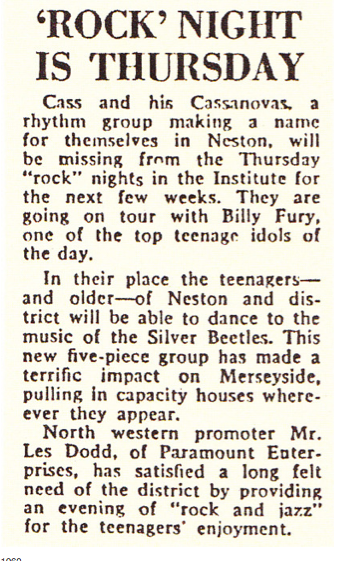 Birkenhead News and Advertiser (Heswall and Neston Edition), May 1960

Note that, apart from John Lennon, they have deliberately given the reporter false first or second names. However, the group is now The Beatles, and it was this review that John Lennon evidently prized as their very first review:

‘…Fifteen years later, John Lennon – given a copy of the cutting in 1964 and keen ever after to show it around – called it “possibly the first review of the Beatles ever” (see The Beatles: An Illustrated Record [1978 edition onwards], p.3). It was definitely so.’